I'm still not feeling well, and I only managed an hour on the allotment this weekend. So there's nothing really to report. Yesterday we managed to go out for a slightly belated birthday meal at a Vietnamese in town, and then went to see 'Blood Diamond' at the cinema over the road. Namissa's Sierra Leonean, and anyone watching it can imagine for themselves how we felt when the girls got caught up in the chaos.

Kumbi, who was 11 at the time, was briefly in the fighting just after the coup on May 25th 1997, which was orchestrated by someone living just round the corner from us in Ladywood. She was rescued by the US navy after the Red Cross organised a ceasefire to get civilians out, and the first we heard about it was when she was in teh air bound for Stanstead. Fortunately, after endless delays, we'd managed to get clearance to bring the two of them about a week before. She arrived badly traumatised, and is still affected by it all. Mina was five at the time, too young to understand what was happening, and never saw any fighting. But she was taken upcountry, the phone lines were down, and it took six weeks before we knew she was safe. Then it was another six weeks before we could get her taken over the border to Guinea, and flown out.

I managed to track down a link to a short filmclip about a girl who spent a weekend with us a few years ago. When she was 13, the rebels killed all her family and cut her hands off. She struck lucky, and was on her way to be adopted by a couple in Canada when we met her. She had brand new artificial hands, which looked quite convincing, but were totally useless, so they just got taken off and left behind the door with her shoes as soon as she came in the house. It's the clip at the bottom of the page.

The film makes inevitable minor errors, but the portrayal of the bloody madness in rebel-held areas is pretty accurate, as is the obsession with diamonds. The war was nothing but an excuse for all parties to take advantage and mine like crazy. Definitely worth watching.
Posted by Robert Brenchley at 17:32 1 comment: 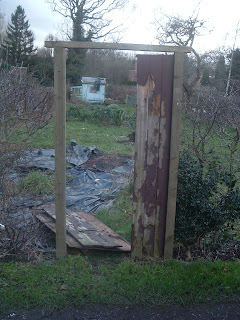 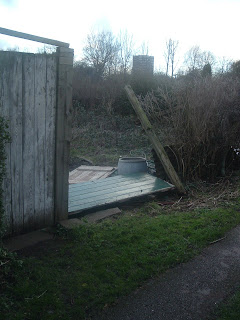 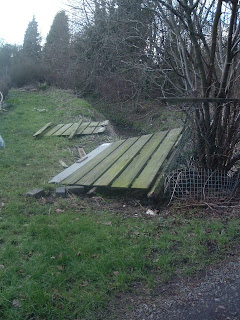 I've been unwell all week, and I've really struggled to cope with teaching; I haven't been fit for anything else. But I did get down to the site briefly today, just to check how things were after the gales. Several of the more wobbly gates and bits of fence have come down, but there's no serious damage anywhere, no more trees down, and nothing at all on my plot. I'm not too surprised really; all the hedges reduce the force of the wind to the point where we don't often get anything to worry about in the way of wind damage.
Posted by Robert Brenchley at 21:45 No comments:

I've had a bad week; I had a bad cold, and coping with school has been a nightmare. I had a really hard day on Monday covering art in a difficult comprehensive, then struggled to cope with three days of very intensive work in college. At least the students are an understanding lot. Friday was easier; I was feeling a little better, and just had a bunch of noisy six and seven year olds to cope with.
I got to the allotment today and found the first snowdrops are out; Galanthus caucasicus and a couple of G elwisii, not the ordinary G nivalis varieties. The pic is of Caucasicus, my favourite. It's a lot bigger than the normal ones, and not hard to find. I've planted some Tricyrtis (toad lily) seeds, and found that a pot of Helleborus argutifolius I planted last year are germinating merrily.
The rats have been busy in the shed; a pumpkin has been finished off, and the whole place stank of rodent urine. It's a problem every winter. and the only real solution would be a new shed. The old one is falling down anyway. I put down what poison I had, and if I keep going that should at least limit the numbers.
I've done some more digging on a flowerbed I'm trying to clear, and spread half a dozen barrow loads of soil from one of my mountains. These are great heaps I made in the early days on the plot, when I was digging out vast quantities of turf and weeds. I just piled it up, covered it with plastic, and left it. I've been spreading it gradually ever since, but there's still some way to go. Once spread, it produces massive flushes of weeds the first year, then settles down, and it's really good loam.
Posted by Robert Brenchley at 19:49 No comments:

The end of another year 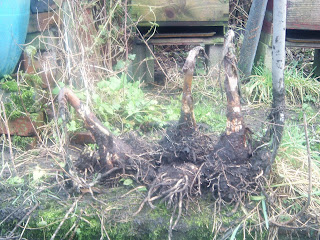 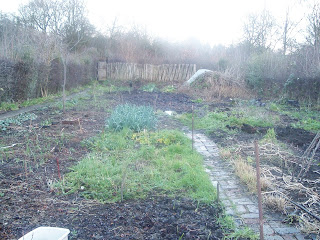 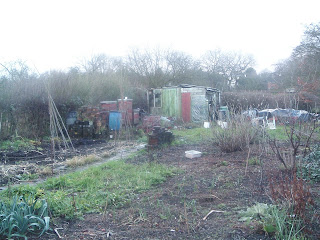 I'm starting this here as a continution of my blog at http://journals.aol.co.uk/rsbrenchley/ThisandThat/ . Hopfully this site is going to be more photo friendly. If it is, then I suppose I'll need another camera as the kids keep borrowing the current one.

The two pics of the plot were taken on a bleak winter's day. I haven't managed to get much done over Christmas as I've had a nasty fluey bug, and between that and the weather, I just didn't feel like it. I did manage to get a bit of digging done on the better days though. There's not too much now as every year I get more ground cleared of weeds and mulched. Once I get to that point, I don't need to dig it again, just keep mulching. I've dug over the old Jerusalem artichoke bed, and after the drought I hardly found anything in it at all. I was really surprised. I no longer need it as a screen now the hedge has grown, so I'll just plant a few and use the space for rhubarb.

Since then, I've been working on a weedy flowerbed, and I had to lift the most enormous Crinum bulbs. The pic, which was intended to be the last, has come out first, with a fork for scale. I'll get the hang of this site eventually, I suppose. When I put them in five years ago they were just large bulbs. They flowered for the first time last year, and I was very reluctant to lift them as they don't like disturbance. There was ground elder growing through them though, and it just had to go. So I ended up trenching under them, breaking enormous fleshy roots that went right down into the subsoil. They'll get over it, in time.
Posted by Robert Brenchley at 20:10 No comments: