The hive that was decimated by the cold unfortunately didn't make it, as there were too few bees left for it to pull through. I was wondering why there were still bees in the top boxes in the hive the swarm moved into (No. 6), so I pulled it apart to find out.

I thought I'd shaken all the bees down into the bottom box, below the queen excluder, but there she was at the top. The bees won't desert her! She's marked green (last year's colour), so that was presumably when she was raised. She's quite small, without the distended abdomen I usually see in queens. She's not laying either, so she may still be slimmed down from swarming. I'll have another look in a week or so, and see what's happening then.

Meanwhile I'm still planting tender veg. The germination I've had from my squashes has been vole, and I don't know why. I've had them on a warm windowsill, so they've probably been warmer than in previous years when I had them in the min-greenhouses. Apart from that, everything's come up fine.
Posted by Robert Brenchley at 21:09 3 comments:

They've been at my broadies. Serve me right for leaving them on the ground. Never mind, some are still untouched. 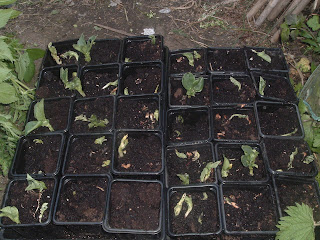 Posted by Robert Brenchley at 17:02 2 comments:

Last week, as the temperature warmed up, I found mobs of bees round one of my empty hives. I get this every year, and assumed a swarm was planning to move in. Sure enough, I went down on Saturday, and there they were in residence. They look like Carniolan hybrids, which tend to be swarmy, and can be bad-tempered. They'll be easy enough to requeen if the other hive pulls through. Meanwhile they're more than welcome, and so far they're perfectly well-behaved. This is an annual event, so I think there's someone not too far away who keeps losing swarms! 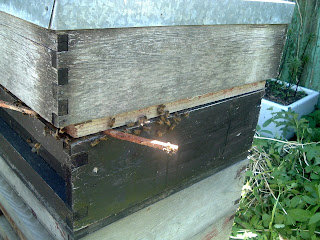 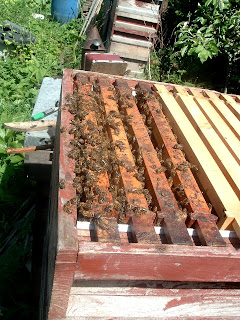 A patch of comfrey in full sun has wilted in the heat, but no doubt it'll soon recover. I've got a barrel full of comfrey from an unlettable plot at the other end of the site, which will soon rot down and provide evil-smelling liquid manure. 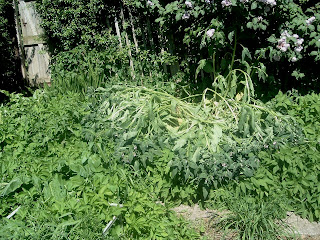 The peas are growing like mad. These are the first I planted. No sign of buds yet, but they'll soon be forming. 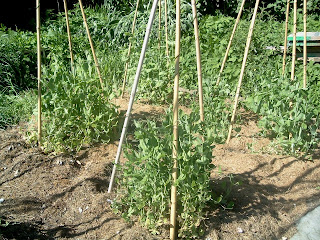 The lilac is covered in bloom this year. It varies a lot from one year to the next. A red rose I planted underneath has grown right up through so I'm hoping for a good show this year. I should have moved so as to keep the apple brach on the left out of shot, but it was so bright I couldn't see the image on the camera screen. Should have used the direct vision viewfinder! 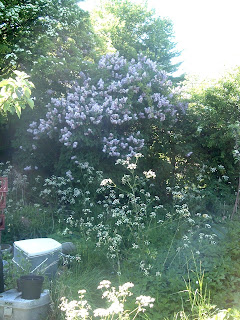 I had an interesting day helping to show some Japanese visitors round my site, and a second site nearby. Apparently they've only had allotments there since about 1920, and they're still developing. A city plot is about 25 square metres, but in the mountains they have larger plots with huts on them. Unfortunately I forgot the camera (I'm always doing this) so I don't have any pics.

The second site we visited is quite secluded, like mine, but has a completely different atmosphere as there are no hedges. Plots are 2-300 square metres, rather than our 300 or 600. It's more of a standard size, and obviously a lot easier to manage. They've got wide grass verges and communal spaces, with lots of trees. I assumed at first that this originated as plots which were abandoned when allotments were unfashionable, but as far as I could gather, it was actually laid out like that from the beginning. There's a nice communal building with kitchen facilities and toilets; we could do with something similar on my site!
Posted by Robert Brenchley at 22:52 3 comments:

The bees are alive, and the queen looks OK. They're greatly reduced in nimbers, and the brood is dead, so they've been knocked right back. They should recover, but there won't be any honey this year. I'll know for sure when I see eggs.
Posted by Robert Brenchley at 21:35 No comments:

Today I found my one surviving colony almost dead from isolation starvation. On May 15th!

They had clustered on the brood, as might be expected; bees very rarely abandon it. But they were a couple of inches from the food, and it must have been too cold for them to be able to bridge the gap. I spotted that no bees were flying on a mild afternoon, opened it up, and they were obviously very weak. When I pulled some frames, I found bees that were obviously dying. The queen was still alive though, so I doused them with sugar syrup. That started to wake them up, and by the time I came home, a few were beginning to fly. The weather's getting warmer, so they should be OK now. It will have set them right back though, and I'm not expecting any honey this year.

I've planted out more peas; Latvian Pea, Irish Preans, Lancashire Lad, Victorian Purple Podded, Commander, and Clarke's Beltony Blue, and started a few more in pots. The beans are looking a bit sorry for themselves, but they're OK. Some of the sweet corn was finished off by the frost, but 35 out of the original 60 I planted are alive, with more to come. Not all the seeds germinated, but I'm not complaining. It'll give me some nice early corn, and spread the season a bit.
Posted by Robert Brenchley at 20:50 2 comments:

I'm now the only one in the family who isn't recovering from an accident. Namissa's still off work with a shoulder injury from a fall at the beginning of January, Mina's still got her arm bandaged from putting her arm through a bus window, and now Kumbi's broken her wrist. I had a bad fall in the New Year, so hopefully that's my accident out of the way at least.

I've been planting more peas; Bijou, Champion of England, Kent Blue, Ezethas Krombek Blauwshok, Carlin Pea and Robinson, a marrowfat named after the earliest known grower. Whatever the original name was, it's lost in the mists of time.

The potatoes have been badly frosted, but they'll soon recover. The only ones with significant topgrowth so far are accidentals, and I'm not worrying about those! The ones I've planted are all well behind, showing how cold the soil still is. I've had to replant the Cosse Violette climbing beans, and I lost a lot of the Breja, which is embarassing since I'm growing them for the HSL. I have enough left to get a crop though. They were hit by a cold, but not frosty, night just after being moved to a mini-greenhouse from a nice warm windowsill, and obviously hadn't acclimatised. The toms were frost damaged as well, but it's just patches on the leaves, and the growing points are OK. They'll soon grow past it.
Posted by Robert Brenchley at 12:25 1 comment:

My one remaining colony has had brood on two frames for a couple of weeks now. It's not as much as I'd have hoped for at the beginning of May, but at least the area on each frame is getting bigger each week.

I've been planting out peas; Bijou and Champion of England, both from Real Seeds. Bijou is a Giant Sugar Pea, a Victorian type which long since went out of fashion, and Champion is an early marrowfat from 1843. Both are tall.

It's been a bit of a hectic week since my daughter put her arm through a bus window on Tuesday night. She's OK, fortunately the injury is on the back of her arm where the bone is just under the skin, so there's no permananent damage. She's got eight stitches and a very impressive bandage, but it'll heal.

I let someone persuade me to go on Facebook, rather reluctantly since I don't like chat sites, and as a result I'm now in touch with some of my nieces and nephews. We're the ultimate non-family, and my sister went off years ago to run a shop on one of the out-islands on Orkney.
Posted by Robert Brenchley at 19:53 3 comments: