I've checked the hives, as we had some milder weather, and they're all OK, with brood. I'm not missing the fourth, as it was quite nasty-tempered, and gave me some good stingings last year. That's always a worry with close neighbours. The one I combined it with is still as docile as ever; as usual, temper was a product of the queen not the workers, and once the queen went, the problem went.

I've done some more hedge chopping, and if I don't finish next weekend, I should certainly do so the weekend after. I'll be really glad to finish as it's a horrible job, and wielding the petrol hedge trimmer always gives me backache, quite apart from blowing fumes in my face. Some strawberry runners (Elsanta, Honeoye and Symphony) arrived yesterday. I've potted them up, and I'm going to grow them on in a cold frame until I lift the garlic, then plant them out. By next year, they should be really well established.

Apart from that, I've been to someone's 50th wedding anniversary celebrations, and their renewal of vows. Last week I met someone who'd just celebrated her 70th anniversary, which puts them in the shade.
Posted by Robert Brenchley at 22:17 No comments: 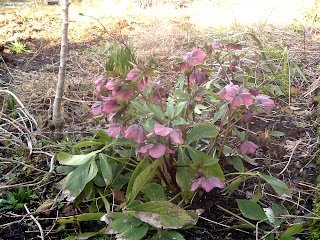 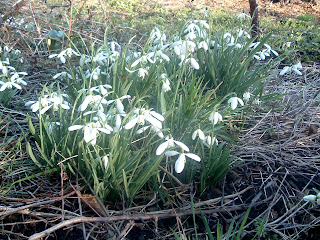 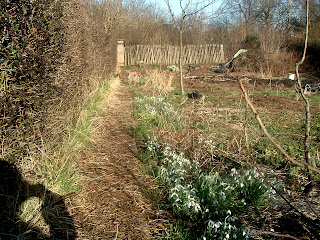 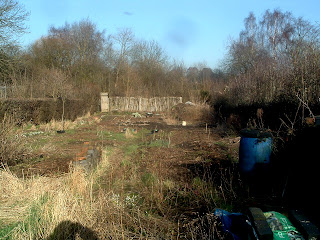 Here are some pics of the plot. As you can see, it's in a rather weedy state at the moment. I cut back the hedge at the end this morning, so a bit of progress has been made since I took the pics a couple of days ago.
Posted by Robert Brenchley at 21:05 No comments:

I found the bees flying well today, with three out of four colonies very active, bringing in large quantities of pollen. That alone is noteworthy, as there isn't usually much available this early in the year. I rook advantage and did a quick inspection.

The two native hives, with queens raised in the good weather in late summer last year are doing well, but with far more brood than I'd expect in February. As a result, they're using their food stores at a rate of knots, and need watching carefully. Of the two hybrid colonies, with queens raised by someone else in the bad weather at the beginning of last summer, one is moribund, and evidently lost its queen some time ago. I'm going to combine that with one of the good hives tomorrow. The other is strong and active, but has no brood at all. I suspect it's queenless as well, but I'm going to give it a while just in case. All being well, my plan now is to use the two healthy colonies for honey, take it at the end of July, and then raise new queens, with a view to starting two new hives to replace the hybrid ones.

I did a bit of digging, but that pretty much finished me for the day, as it's heavy going after all the rai we've had.
Posted by Robert Brenchley at 21:55 No comments:

After 20-odd attempts, my wife has finally passed her driving test, so we were out celebrating last night. Apart from that, all four hives are still alive, though it's going to be another month before I can be reasonably sure that they'll survive into the coming season. The snowdrops are blooming well now, while alliums and the broad beans have put on some noticeable growth, and everything looks set for the spring. I was looking at the daffodils in the lane outside the plot yesterday; they were exhausted old bulbs which had been in pots for years, and I didn't mind too much if they got nicked. They're gradually producing more flowers, year by year, so they do recover.

What with one thing and another, there's been virtually no work done on the plot, but I've only got a week to go till half term, and I should be able to blitz it then.
Posted by Robert Brenchley at 08:29 No comments: