It's been a while since I posted; I've had computer problems, upgraded a lot of stuff, then had the motherboard die on me and had to replace that, the CPU and the memory as well. So the computer's been almost entirely rebuilt over the last couple of weeks. On top of that, I've had to take time off work this week due to exhaustion; missing my Easter break doing extra revision classes is really affecting me.

I've been too tired to do a lot on the allotment, but I've managed to get the purple-podded peas and some of the sweet peas planted out. I've replanted purple-possed pea and ne plus ultra, since the latter was almost wiped out by mice, and put in a late lot of crimson-flowered broad bean, in pots. I need to get some more planting done over the weeken, if the weather gives me a chance.

The bees weren't expanding beyond 2 1/2 frames of brood, and I was getting worried, but they had a couple of half-drawn plastic frames just outside the broodnest, and I was wondering whether they just didn't want to use them. So I moved one good frame in on one side, within the broodnest, and a frame of nasty drone cells just outside it, on the other. After a week, I found yesterday that the former was well and truly laid up, with 3 1/2 frames of brood present, and the latter was well on the way to being chewed away; the bees didn't like it at all, and it had great holes in it. So I moved some more good frames in. I'm a lot happier about that colony now.
Posted by Robert Brenchley at 09:56 No comments: 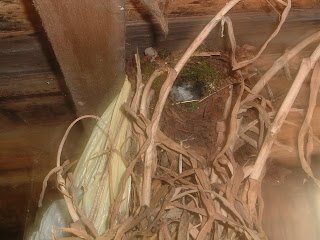 Several weeks ago, a wren built a nest among the garlic plaits hanging from the shed roof. The males build up to ten, and the female chooses one to lay in. as there was no activity to be seen, i'd assumed they weren't using this one, but now they're flying in and out all the time.

I've been going like mad the last few days, potting up seedlings. I've done the tomatoes, and almost all the corn, but i still have the squashes to do. It's not a job I enjoy, but it has to be done. At least I've got more space this year, with the extra mini-greenhouse.

The bees are still on 2 1/2 frames of brood, but with noticeably more bees in the hive than last week.

Posted by Robert Brenchley at 22:39 No comments: