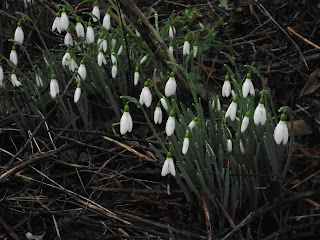 Galanthus caucasicus (I like snowdrops enough to have the odd species; it's about twice the size of the normal snowdrop) coming out.﻿ 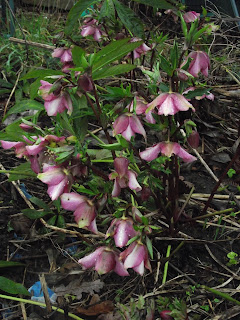 One of numerous hybrid Hellebores I have round the allotment. A neighbour once used some blue plastic by mistake; it disintegrated due to the ultraviolet, and there are still bits around the place. the only plastic sheeting that should be used on a garden is ﻿the black stuff used to smother weeds. 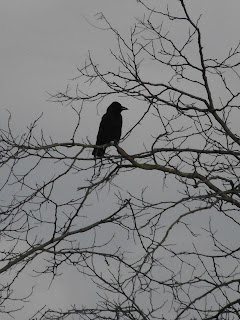 ﻿And a crow.
Posted by Robert Brenchley at 17:36 No comments: 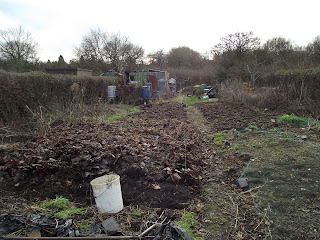 As you can see, I'm digging steadily, and covering everything with dead leaves. There's not much goodness in them, but it keeps the weeds down, keeps the soil damp in dry soells, feeds the worms, and adds humus. The recent frosts finished off the roses, but hellebores are flowering, and snowdrops are showing colour. Not long to the end of winter!

One hive has died out; the other three are looking good. The dead one dwindled away over a period, leaving a very small, very dead cluster, with food available. So they didn't starve. I suspect a bowel fungus called Nosema, but without a microscope, I can't prove it.
Posted by Robert Brenchley at 10:01 3 comments:

Frost has been very evident oon the allotment the last few days, making its status as a major frost pocket only too obvious. There's not much frost where I live, and it soon melts in the sun, but on the plot, it hangs about all day. Cold air flows down to the stream, runs along its course, and hits the railway embankment at the bottom. So we get a pool of cold air hanging over the site. I don't think it affects our vegetable growing much, if at all, but it leaves me worrying about the tender tubers I have sitting in buckets of damp sand. Another time, I may leave them in the boiler house at church, which is probably going to be completely frost free. The buckets would take a good bit of freezing though, so they'll probably be OK. One more night of it, and it's supposed to warm up again.

I haven't done a thing down there this week, as I've been getting a new carpet laid in church, along with a sound system, and an electronic hymnal, which is like a little computer which plays hymns. Just what we need when the organist isn't there, but I did my back in shifting chairs. I was expecting the carpet people on Wednesday, they turned up Monday morning, and I had to get everything shifted out in a hurry.

Only six or eight weeks to go till spring!
Posted by Robert Brenchley at 19:19 No comments: 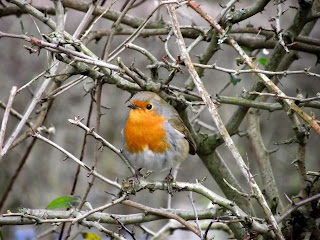 And here's a crow. 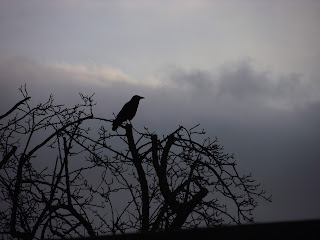 Posted by Robert Brenchley at 17:50 No comments: 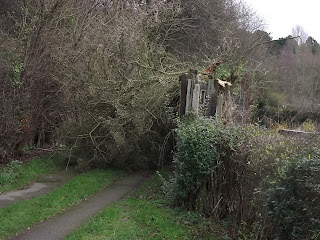 There's a hawthorn down a few yards from my plot. Also a massive sheet of corrugated in the stream at the bottom. Fortunately it was too big to go round a tight bend by the bridge, and block the culvert. The problems that would cause don't bear thinking about. I managed to drag it out from under the bridge, but couldn't get it up the bank on my own. With a bit of luck, I might manage to find some assistance today, and get it shifted. Apart from that, I think we've all survived the week's gales in good shape, and the Council have been informed about the tree. They're usually pretty good about getting somebody out to clear the lane.
Posted by Robert Brenchley at 10:07 No comments: 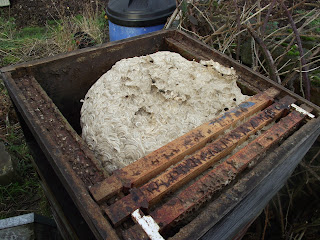 I was admiring this wasps' nest in one of my empty hives yesterday. It almost fills an 18-inch square broodbox; I've never seen anything like it outside the University Museum of Natural History in Oxford. They've got a massive one on display there; from what I remember, they had two nests side by side, and they combined into a monster. This is a single nest, which I watched throughout its development.

I've planted out twenty raspberry canes; they've been on the plot a couple of years, but I haven't managed to get them organised. I tried last year, but health problems plus the drought led to most of the canes dying. This time it should work, as they've got plenty of time to get settled in before summer.

A neighbour just gave me a tray of shallots, whihc need planting out. i haven't had any success with these before, but I'm quite happy to try again. They're his show stock, so they're nice fat bulbs which should, in theory, do well. So that's the next job, along with garlic and elephant garlic which need planting out as well. Walking onions, Babbington leeks and Welsh onions can all stay in their pots for the time being. I'm waiting for maincrop onions to appear in the 99p shop, since I got them there last year, and they did really well. I haven't had any success growing seed yet, but maybe once I get a polytunnel up. Hopefully I'll manage it this year!