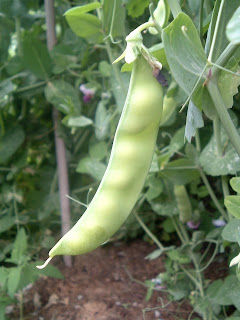 This is a Kent Blue pod, at about the stage when I pick them. It's very sweet-tasting, while bijou, the other mangetout I grow, is massive but less sweet. Unfortunately I couldn't get to the plot for a few days over the weekend, and meanwhile the dangling CD's I use as pigeon scarers got tangle up. The result was that the flying rats completely stripped Kent Blue and Lancashire Lad, and partially stripped several other varieties. Kent Blue is hard to find, but fortunately I have a source in the US.
This morning I had a newsletter from the HSL saying that Lancashire Lad isn't what it pretends to be, as it was originally a green-podded variety. It's still a nice purple podded pea, even if it is now nameless. 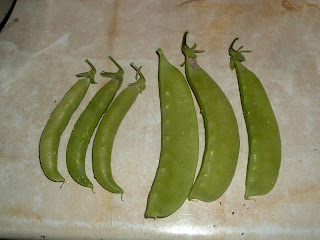 Bijou and Robinson side by side. Robinson is a very good-looking pea with large, well-filled pods, but it's dwarfed by the five-inch Bijou pods. If I can time them right, I should do well with one or the other in next year's show! 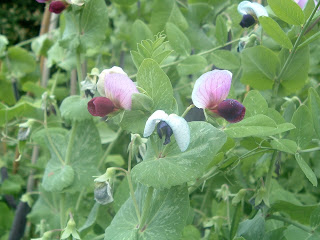 Carlin pea, the oldest known variety. It was recorded in 1562, four years after Elizabeth I became queen. It's probably a lot older than that. It has small, green pods, but plenty of them, and as you'd expect, it's not particularly sweet. The roses have done well this year. This is the Jacobite Rose, known by many other names as well. It's a very old Alba, possibly the original White Rose of York. It was definitely used by the Stuarts as their emblem, hence the name. Their motto was 'Rosa Sine Spina', a Rose without Thorns. The young stems are almost thornless, but the old stems develop vicious spines. Whoever thought this one up was no gardener! I had cuttings of Rosa alba Semi-Plena, the other candidate for the White rose of York, but they perished in the drought. I'll have to try again. 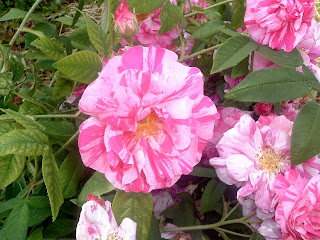 Rosa Mundi, an ancient sport from the Apothecary's Rose. It may be named after Rosamund Clifford, Henry II's mistress, or that may be mere romantic nonsense. 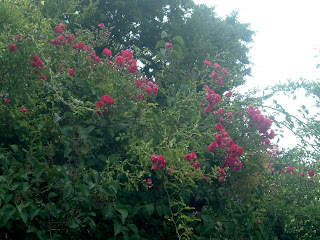 I acquired this nameless rose as a neglected plant in a pot a few years ago, along with my Jacobite Rose. I could see it was a climber, so I put it under a lilac; it's now grown right up through, and started putting on a show. The question now is whether it'll carry on up through the hawthorn beside it. 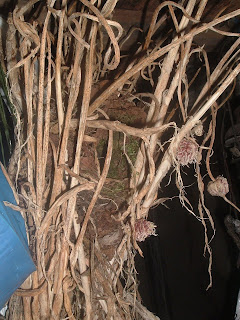 Lastly, I have a wren nesting in my shed. The male builds several nests, and the female picks one to lay in. I've had them build there before, but not lay, so I wasn't too hopeful. They're definitely on eggs this time though.
Posted by Robert Brenchley at 22:19 11 comments:

I apologise for not posting for so long. I've been feeling really under the weather, but I'll manage something properly in the next day ot two. Meanwhile, I've started a new, theological, blog over at http://theradicalmethodist.blogspot.com/ .
Posted by Robert Brenchley at 21:01 2 comments: