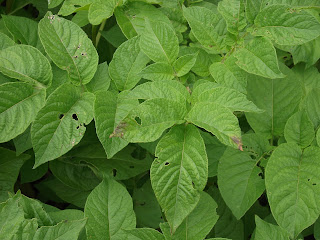 I'm not certain, but it looks unpleasantly like it. I've taken off the dubious foliage and put in in a dalek. We'll see. Meanwhile, on a pleasanter note, the beans are finally showing signs of growth.

I had a look at the bees, and finally found and marked the swarm queen. She's a great fat, dark thing, and as always she left me wondering how on earth I managed to miss her for so long. The other hive has most of the bees down below, where I wanted them, with a suffient number in the top broodbox. The new queens should have hatched by now, and they were taking in loads of pollen. There won't be a mated queen yet, but pollen going in is usually a sign that all's well.

Posted by Robert Brenchley at 18:27 No comments:

I opened my established hive the other day, and found a dozen or so queen cells along the bottoms of the frames. Obviously, they were about to swarm. This is colony reproduction. A queen can't survive on her own, so the old one flies off with half the bees in the colony, leaving the young bees, brood, and queen cells behind. A new queen mates, and the old colony carries on. Work in the States, in an area with a similar climate to the UK, suggested that about 25% of swarms would normally survive their first winter. The work was, of course, done before the arrival of the varroa mite, which decimated feral bee populations.

So I went through the colony, found the queeen, caged her, and put her aside. Then I got a spare broodbox, with empty comb. This went at the bottom of the hive, in place of the old one, and I put a frame of comb with brood in the middle of it. On top went a queen excluder, and some honey supers, which are used to contain the surplus honey I get. A hive is essentially a pile of sturdy wooden boxes, and they just sit one on top of another. On that went an intricate and ingenious device known as a Snelgrove board (shown in the pic), and the original broodbox on top of that, with bees and brood. The roof went on, and I ran the queen in through the entrance. 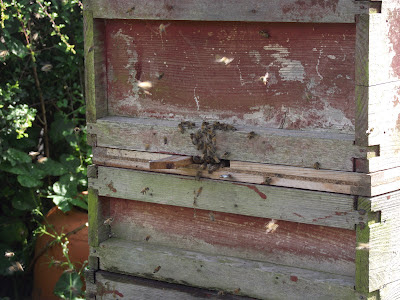 The flying bees would have gone straight back to the original entrance, so the bottom box ended up with the queen and the older, flying bees; pretty much the same as if they'd swarmed. The addition of a little brood is to stop them flying off; they won't abandon it. The lack of brood, queen cells and younger bees will stop them swarming.
At the top are the young bees and most of the brood, with no  queen or older bees to swarm out. The queen cells with hatch, and one or more - the old myth that there's only ever one queen in a hive is wrong as often as it's right - will mate and start to lay. The Snelgrove board has numerous little entrances which can be opened and closed, and can be used to move bees from the top box to the bottom. So I can maintain the population of older workers down below, and still expect to get a honey crop from the hive, as long as the eternal rain finally stops. 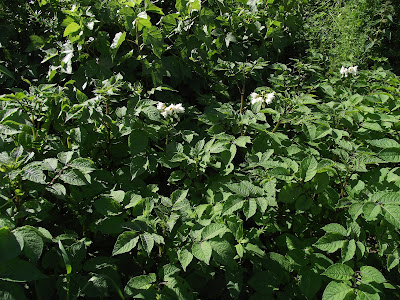 This is a very old French potato with the embarassing name of 'Negresse'. Well, you'd be emabaraased if that was a term which would once - and occasionally still is - applied to members of your family! The skin is very dark purple, almost black, and the flesh purple. It's about 200 years or so old, possibly an original import from Peru, Obviously, those were slavery times. If I can get any ripe seed from those flowers, I'll try growing it, and you never know, I might end up with something I could name 'African Queen' or something appropriate. 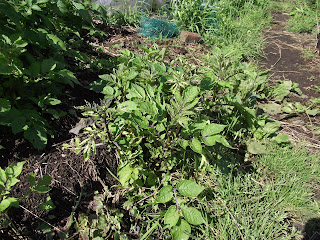 
This is asimilar very old, black, French variety called 'Vitelotte'. The tubers came from the local market, and as you can see, they didn't appreciate being there. It's not growing well at all. However, as long as it produces some tubers, that's all I ask for this year.

The problem is that, like all really old varieties, these are late maincrops. Earlier cropping potatoes are the result of European breeding, and came along later. Endemic blight hasn't given them much chance, though I have managed to keep Negresse going for a couple of years. We didn't get blight last year, due to the drought, but that didn't give the spuds much chance either, and the current very wet weather is creating ideal conditions for the fungus. It hasn't appeared yet, but if this persists, it surely will.

Posted by Robert Brenchley at 21:50 No comments:

The water's drained away, though some low-lying plots were partly under water for a couple of days. Nothing's obviously damaged, but the big question is how much root damage has been done. If there's a lot, vegetables stop growing, and the crop's lost.

I had a look at the swarm, and gave it several frames of foundation (sheets of wax embossed with a hexagonal pattern) to draw out into comb. Swarms are good at that. They had several frames of eggs and very young - first day - larvae, which is a very good sign.
Posted by Robert Brenchley at 19:26 No comments: