The Salad Garden, by Joy Larkcom 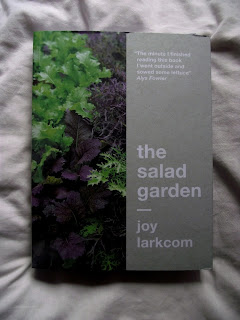 Salad crops are something I admit to knowing very little about. I don’t really eat leaves myself, and my wife isn’t interested in salad without tomatoes. I gave up trying to grow them outdoors due to blight, which can strike in June on the allotment during a wet summer, and have only just got myself a polytunnel. I’m growing masses – I hope, after they sulked all through last month, and a very cold night left them frost damaged - so salad would be a good idea. I struggle with the blandness of some ingredients, but with plenty of tomatoes, something peppery like radish – you can eat the leaves and seed pods as well as the roots – and maybe a couple of chilis, it can be really good.

You can eat the whole of any radish, but there are particular varieties developed for their seed pods. I tried one a few years ago; it grows five feet high and flops, so it needs staking if you want to try this. The pods are small, but it produces masses, so a few plants would be enough. Any variety can be used; it doesn’t have to be one of the ‘special’ ones.

Walking onions get a mention; they produce bulbils rather than flowers at the top of the flower stem, which dies and falls over, planting them a little distance away from the original plant, hence ‘walking’. The bulbils can be used if you like strong onions, and the leaves can be used like any other green onion. Green garlic is good in season; it’s a use for the smaller cloves while the bigger ones are grown on for bulbs.

There’s a section on wild plants. Garlic mustard is a weed I tolerate in moderation, along the hedge; it has a pleasant taste. Horseradish is mentioned here, as it often becomes naturalised; I tried growing it once before, and within a year it was coming up six feet from the original planting. I’ve planted it again, but this time it’s confined in a large container.

The book provides a pretty comprehensive survey, including vegetables I’ve never heard of. Important ones, like lettuce and tomatoes, receive more in-depth treatment. That’s something I like; I sometimes get seeds of obscure plants, and it’s good to be able to look them up. There’s a good deal of information about cultivation, which might be hard to find elsewhere for some of the more obscure vegetables. There’s also a section on general cultivation, with short section on microgreens and sprouting seeds.

Posted by Robert Brenchley at 12:28 No comments: