I can't remember who sent me seed of Carolfiore di sicilia violetto , but if it was you, thanks!

Hive 1 seems to be settling down nicely, but Hive 5 is being awkward. The new queen has laid flat-capped worker brood, so no problem there. Yesterday morning, I put her broodbox at the bottom, and moved the original broodbox onto the stand next to it. By now, all the flying bees (the ones that sting) should have gone back to the original stand, and joined the new hive headed by the new queen. That should leave nothing but docile young bees with the old queen. This afternoon, flying bees were still coming out at a rate of several per minute, the broodbox was still packed, and they were decidedly in a stingy mood. So I put off sorting through for the queen till tomorrow. Hopefully the polder bees will all be gone by then.

I was looking through a £1 bookstall in town the other day, and found a gem, 'The Transplanted Gardener', by Charles Elliott. Elliott (why do we refer to authors by their surnames? It brings back horrible memories of schooldays) is an American living in England, who brings his own point of view to British gardens and garden history. It's a refreshing change from the utilitarian style of garden writing, which so often just repeats the same old advice we've all heard before, larded out with lots of glossy photos. OK if you're being paid to write it, I suppose, but it's not much fun to read.
Posted by Robert Brenchley at 20:36 No comments:

Hive 1 has capped brood, and after some messing about I've squashed the old queen, and left them with just the new one. I couldn't find her yesterday, so I shook all the bees in the relevant broodbox off the frames into a roof plus an empty super. Naturally, all the older flying bees took to the air, leaving the queen, younger hive bees, and lots of drones, since it was too chilly for them to be flying. I tacked a queen excluder over it, turned it the right way up, and put it at the top of the hive. Overnight, many of the bees found their way down to the brood, leaving a small cluster with the queen in the middle.It wasn't too hard to sort through and find her.

The peas are finally starting to flower, at a smaller size than normal. After the trauma of being chewed by pigeons, maybe they won't reach their normal size. 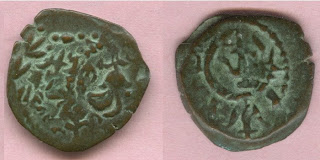 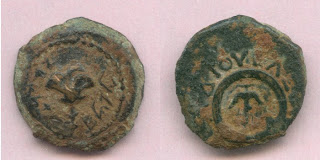 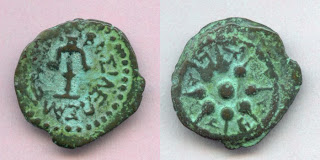 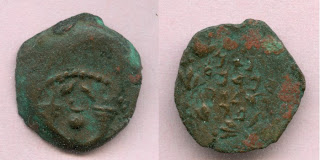 Someone sent me a copy of a recent article from the Celator (a US numismatic periodical) by David Hendin, about some Jewish coins I've been interested in for a long time. The first pic shows one; you can see that it looks a bit of a mess. It's been struck (twice in this case) with a type of Alexander Jannaeus, King of the Jews 103-76 BC, showing an anchor on one side, with the king's name in Greek, and a lily in a diadem on the other, with the king's name in Aramaic (second pic). This side uses his Hebrew name, Yehonatan. It's then been struck a second time, using a traditional type with a double cornucopia (horn of plenty) and a pomegranate on one side, and on the other, an inscription, YONATAN THE HIGH PRIEST AND THE COUNCIL OF THE JEWS, in Hebrew, within a wreath. The question has been, is Yonatan a version of Yehonatan, or is it the name of one of his sons?
I used to think it was probably a son known to history by his Greek name, Hyrcanus II. However, Hendin reports finding one which has been overstruck a second time, with another undoubted type of Jannaeus, showing an anchor one one side, the same as the lily coin, and a star in a diadem on the other, with Jannaeus' name, once again, in Aramaic (third pic). this proves beyond doubt that the overstruck coins were issued by Jannaeus. The last pic is a YONATAN coin struck on a blank flan so you can see what it was intended to look like. By such nitpicking arguments are academic disputes settled! Am I the only one who finds setting out pics in Blogger a frustrating experience, by the way? they never want to go where they're supposed to, then I publish the post and it's all over the place.
I had some good news the other day. I've been working on a very part-time basis for health reasons, but afte several months, a new teacher training course a friend of mine has been setting up has almost got through the accreditation process. So, God willing, I'll soon be back at work properly, in a less stressful job. So before long, with luck, I'll be able to buy coins again!
Posted by Robert Brenchley at 18:48 No comments:

Both new queens are now laying. I just need to leave them another week to ensure that they're producing worker brood, and I can squash the old queens and sort out the hives properly. Then after a couple of months the drones from those queens will be gone, and I'll be able to raise another batch of queens, and, hopefully, have them mated as I want.

Hive 2 has four frames of brood, and is looking good. Almost all the brood in the top box has hatched, and most of the bees have moved down to the bottom. There's still a small cluster of decidedly nasty-tempered bees there.

There's a small patch of blight among my Charlotte potatoes, and many of the others have dark brown patches of dead tissue on the leaves. I'll still get a crop, but it'll wipe out my tomatoes before I get anything from them, for the third year running. There's no blight reported from farms closer than Woverhampton, about 15 miles away. I think it's overwintering on the site, in volunteer potatoes. A campaign to get people to be ruthless about rooting them out every spring might make some progress.
Posted by Robert Brenchley at 23:22 1 comment:

We've had a pretty wet week, and I noticed that the hives don't have so many eggs. This is an adaptation to our climate; queens cut down egg laying in bad weather, and as a result, the colony needs less food to get through till the weather improves. Neither of the two new queens has started laying yet. I hope they're in there! I've started another frame for the eggs, just in case they aren't.

The peas are now growing well, after being netted for a couple of weeks to keep the pigeons off. The crop will be safe, but I'm not sure I'll have anything for the show in a few weeks' time. I've been digging as fast as I can, clearing areas I couldn't get to over the winter, but I'm terribly behind. The good thing is that a lot of ground has been cleared of ground elder. That'll make life easier next year.

Slugs have been having a field day on my squashes. I keep getting this; the solution may be to grow them on for a while in bigger pots, and plant them out when they're big enough to take it. They're particularly vulnerable when they first go out in the open, so it might help to keep them off the ground at this stage.
Posted by Robert Brenchley at 10:01 2 comments:

I tried posting earlier, got an error message, and lost my post!

I've netted the peas, since they were being eaten down by pigeons. I haven't had that particular problem with sky rats before. The nets won't keep a determined pigeon out, but they will deter them for a while, and give the peas a chance to recover. They soon get too big to be vulnerable, and hopefully the birds will have moved on to other fodder before then anyway. They've been knocked back to the point where they're probably going to be toolate for the show next month, unfortunately.

Everything's going in late this year, but at least I'm getting plenty of weedy ground sorted out, so it'll be easier going next year. The weeds grew like mad in the wet last year, especially the bindweed, while the veg did the exact opposite! The oca is now in, despite being delayed thanks to the flood washing away the mulch I'd laid ready for it. The corn is going in, and that has plenty of time to make a crop. I've almost finished digging over the ground I want to use for tomatoes, and they still seem happy in pots. Maybe everything will still be OK.
Posted by Robert Brenchley at 22:00 No comments:

I got 11 1/2 lb of honey today. It's not much but it's something. I'd have masses by now, except that after two dreadful seasons, there was nothing in the broodboxes, and the bees fill those first. That's their supply, and I don't touch it.
Posted by Robert Brenchley at 17:56 No comments: 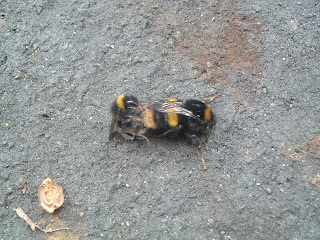 I spotted this pair of Bombus terrestis mating on the pavement this morning.

I've been feeling decidedly under the weather, which is why I didn't post last week. The floodwaters have receded, but they've walloped my beans, and the peas are getting nibbled by pigeons. I've put up some netting to scare off the latter; if once they stop, they're unlikely to start again this time of year.

Last week, I squashed the old queen in Hive 3, renamed it Hive 2, since it's in position 2, and now has an unrelated queen, and put the box with the new queen at the bottom. This week, I found three supersedure cells at one end of the box, and eggs (not many of them) at the other. This could be a failing queen, or it could be due to the three frames of foundation I put between the two. I have heard that a barrier across the broodnest can induce cell raising, though I haven't seen it. So I broke down the cells, and left it. If there are still problems next week, they'll have to raise another queen.

Hive 1 was split last week, and given queen cells, so it should have a virgin ready to mate by now. Hive 4 is looking good. Hive 5 gave me the worst stinging I've had in years last week; I think it has to have been down to the thundery weather, as they were OK today. The day before I opened the hives, a neighbour had eight stings from a wasps' nest which I subsequently dealt with. They've got - I hope - a queen ready to mate in the top box, but last week the old queen was failing, and they were raising supersedure cells. She's no loss, but like Hive 2, I don't want her raising a daughter. Any such queen would produce hybrid drones that I don't want. So I broke down cells, last week and again this week. Hopefully the hive should be sorted next week.
Posted by Robert Brenchley at 11:17 No comments: