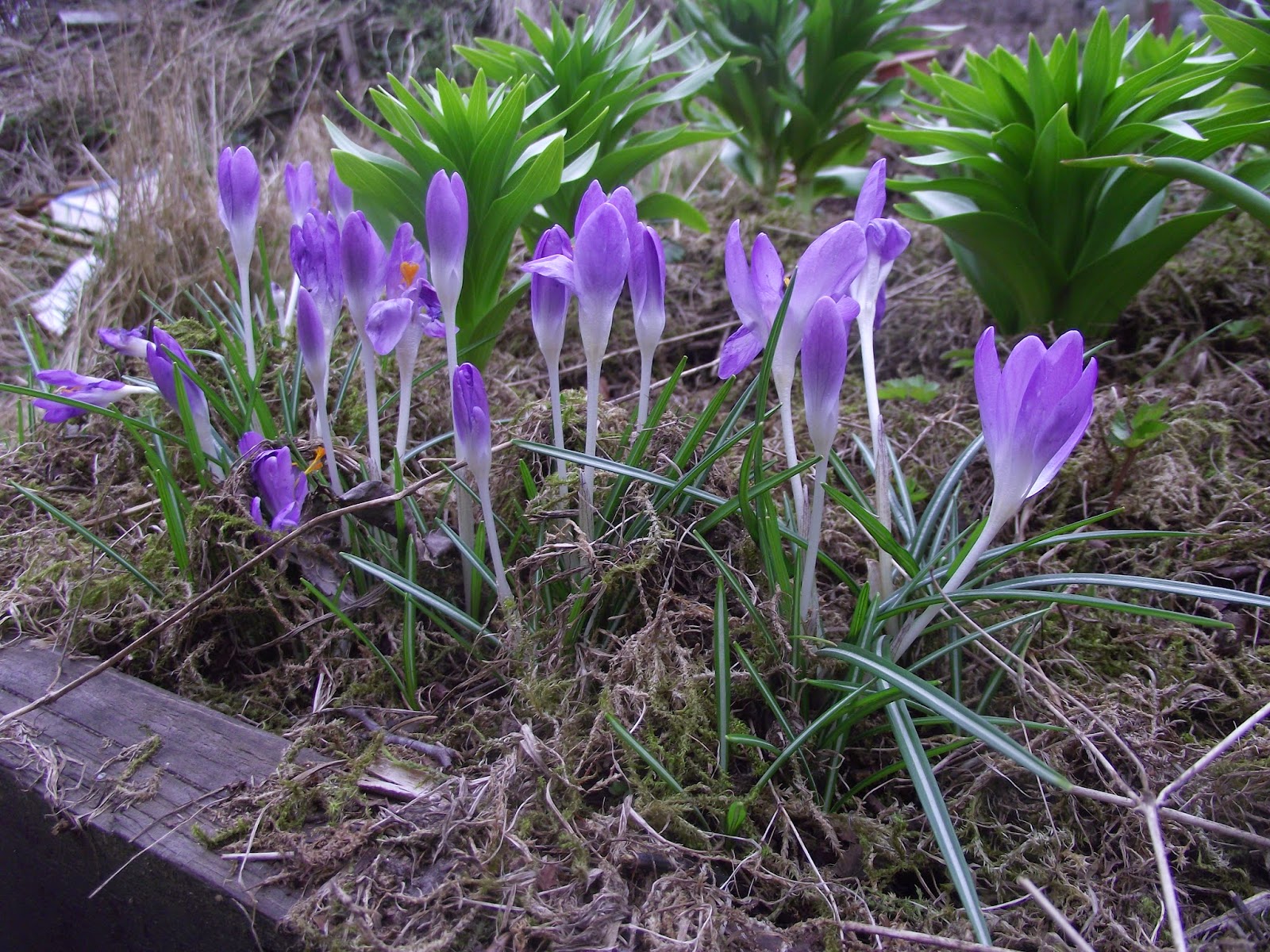 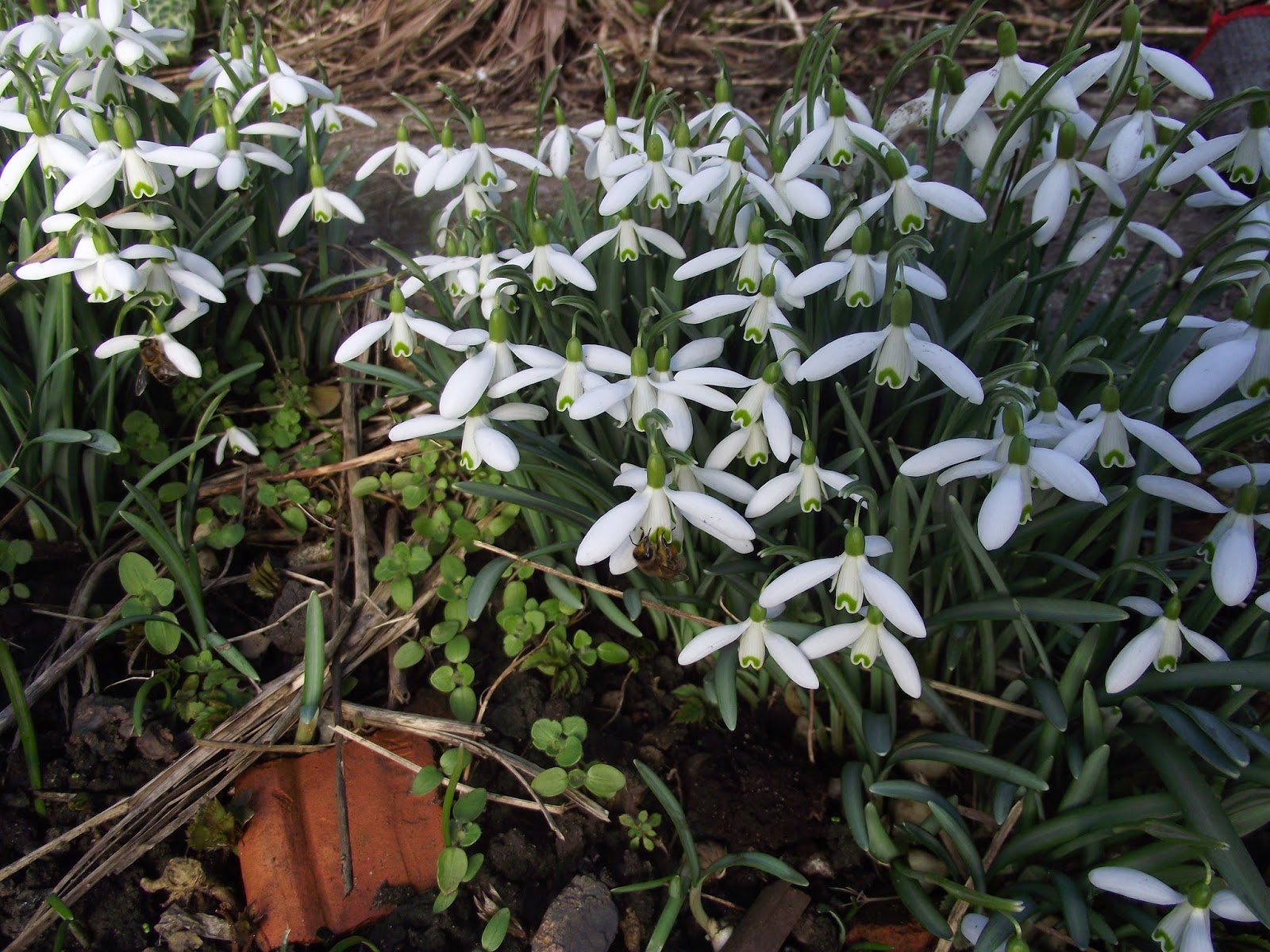 Things are beginning to move on the allotment. The snowdrops have been flowering well as usual, and Crocus tommasinianus, which I found in Cornwall last year, is flourishing as you can see. The daffodils in the lane aren't flowering as well as they did last year, and I'm wondering whether this could be down to the weather. We had a wet autumn; could this have raised the water table enough to damage the roots, I wonder? Waterlogging is always a problem, but everything doesn't go back to that. 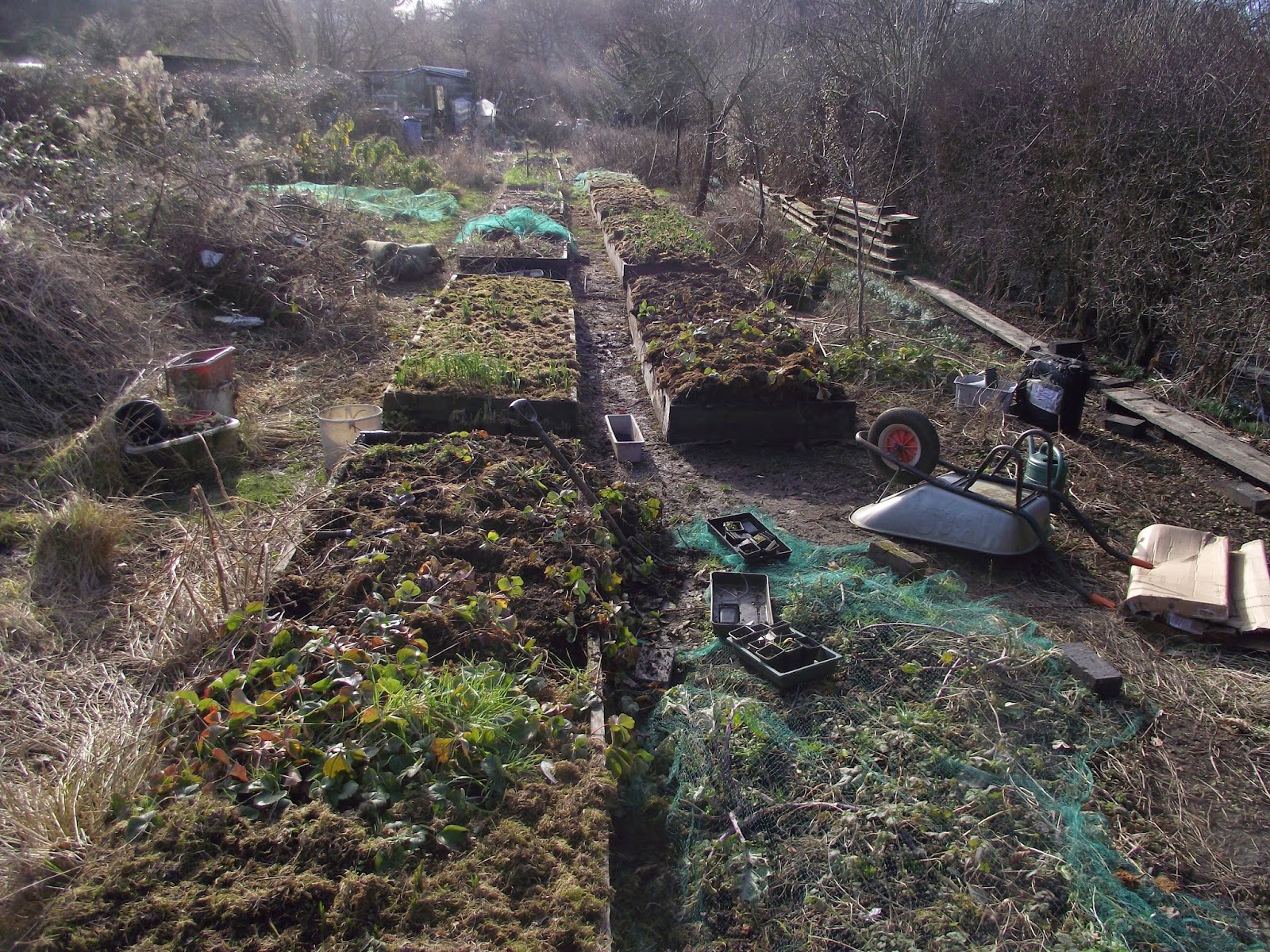 I'm currently working on the eleventh raised bed, in the gap where you see the mesh in the pic. That was protecting some small Taunton Deane Kale plants, which have now been moved. It's slow progress as I damaged my back again a couple of weeks ago, sawing a plank. It's not too bad, fortunately, and hasn't stopped me altogether.

I've begun planting a few things. Seven batches of true potato seed, derived from Violetta, Russian Blue, Desiree, Highland Burgundy Red, Blue Belle, Skagit Magic and 'diverse' from a number of varieties, went on the windowsill today. Skagit Magic seems to be blight proof from what I've seen so far. I've also planted Meconopsis betonicifolia, which is coming up at the moment, Helleborus argutifolius, Welsh Onion, potato onion 'Green Mountain' F2/F3, which arrived this morning from Templeton in Australia, and Everlasting Onion. The latter won't normally flower, but it does occasionally, and someone sent me a seed head. 'Green Mountain' is derived from seed Kelly Winterton in the States garnered some years ago. Potato onions (shallotts are a type of these) don't normally flower, but they will perform occasionally, and once the virus load is removed, the bulbs are apparently much bigger than shallotts, more the size of a normal seed onion.

I'm going as fast as I can, and I'll have more space available than last year, but it's never enough, and even when I'm not damaging my back, I'm still exhausting itself. Still, it makes a change from dealing with a queue of people needing help with their benefits, housing applications or whatever! Right now I need a new strimmer, since the old one died on me, wood preservative, planks, and some rat traps.

Thanks to the cuts, we can't get the Council rat man or the buckets of poison he used to leave us any more. Rats are all over the site, not surprisingly under the circumstances, and I'd expect increasing vermin problems everywhere. Combined with the deterioration in rubbish collections, with household rubbish being flytipped more and more, it's not a good scenario. 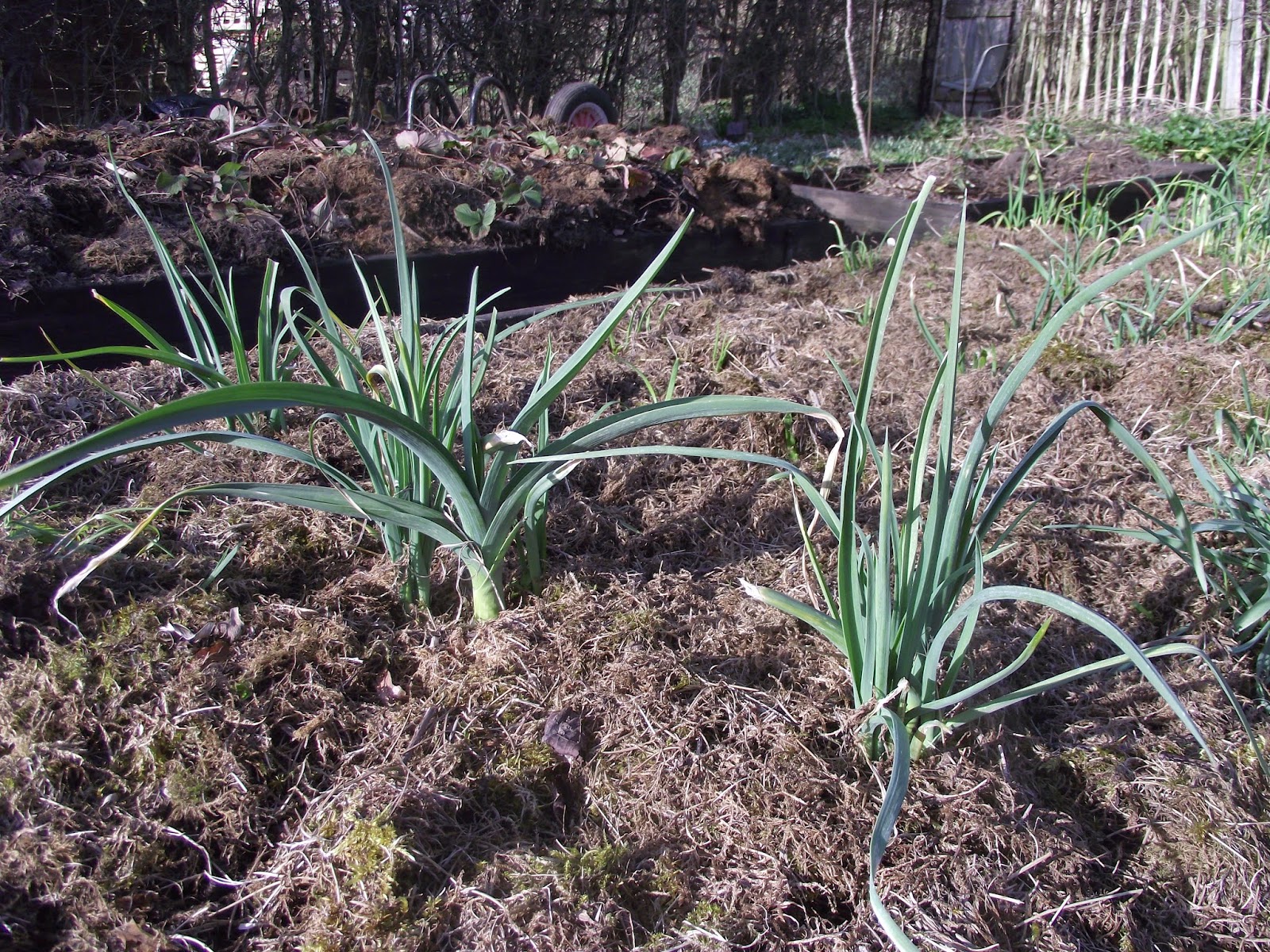 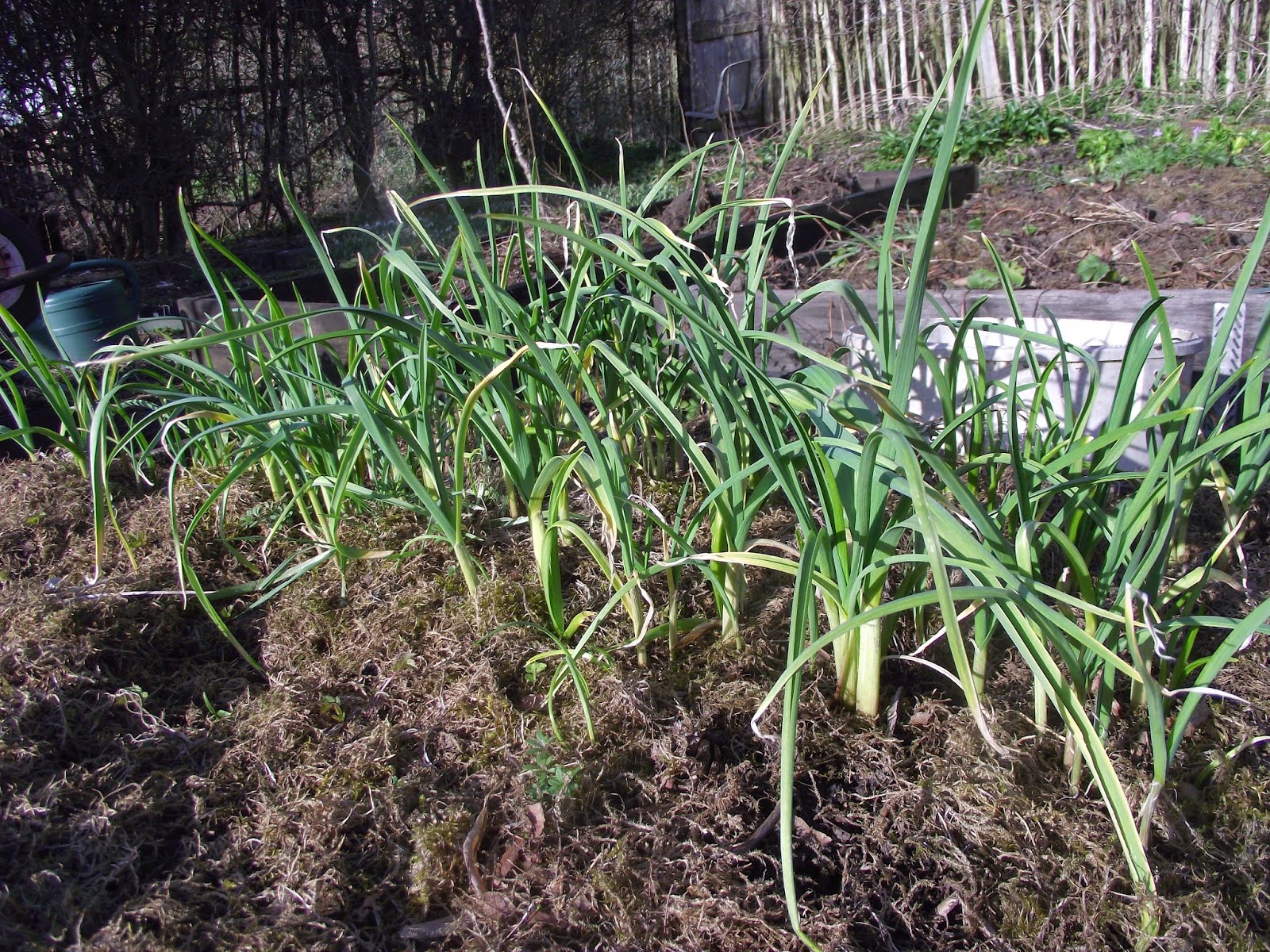 On a more cheerful note, two varieties of green onion, Minogue (top), which may or may not be a pearl onion (the definition of the term isn't clear) and one passed on by a neighbour, which I'm calling Guinea Garden after the site (lower), have stood well all winter. I don't know how to classify the latter yet. They'll multiply up and give me plenty for cropping over next winter. Everlasting Onion is looking decidedly miserable at the moment, but multiplies fast, and will produce over the summer. 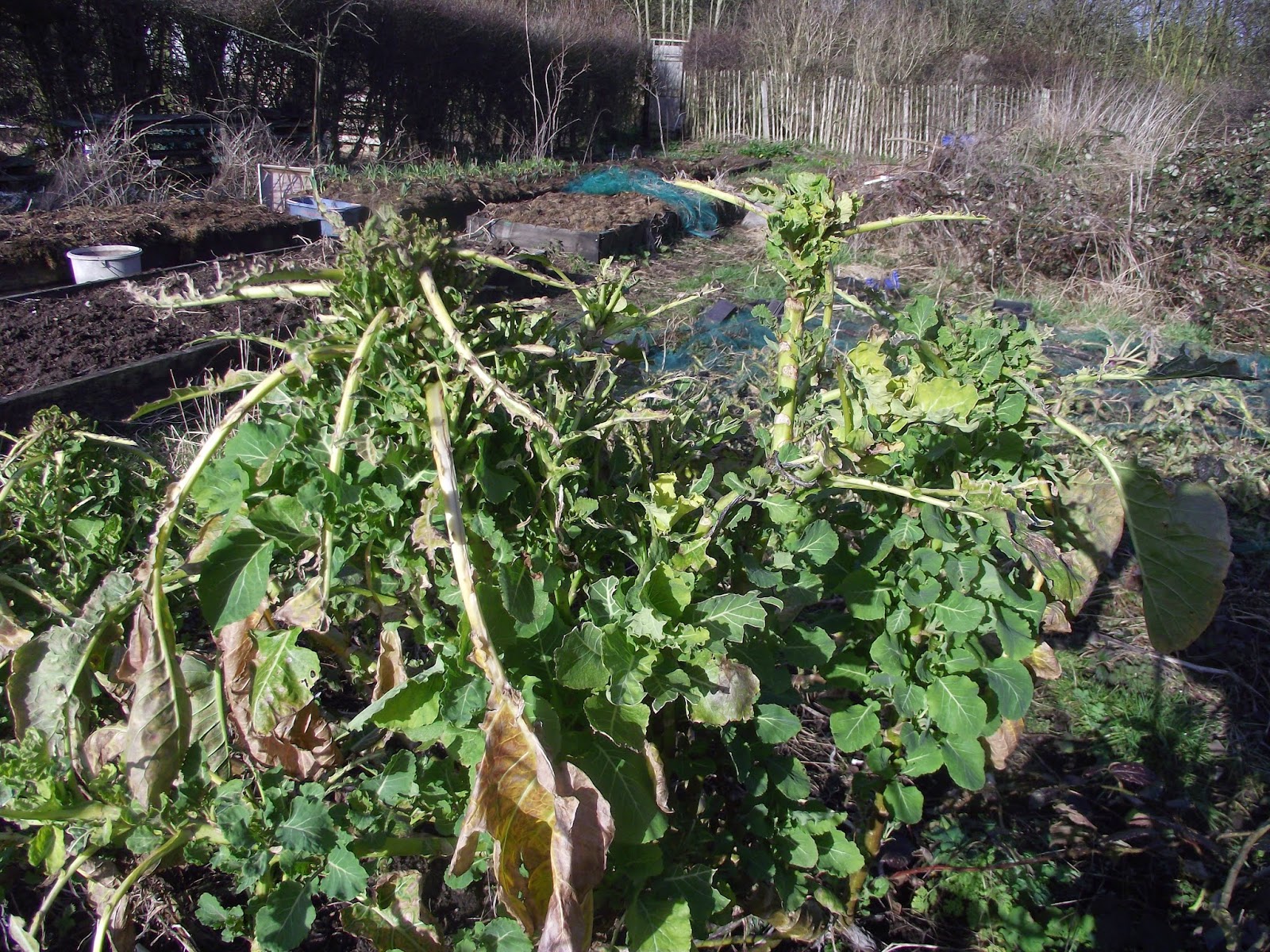 The perennial kales were well chewed about by pigeons, but they're extremely tough, and as you see, they're coming back well. the one in the pic is a tree collard/Daubenton's kale cross, in practice a perennial tree kale. I've got some Daubenton's/broccoli and Daubenton's/cauliflower crosses to try this year. I really fancy a truly perennial broccoli. the nearest we have at present is Nine Star Perennial, and it's only that because we cut all the flowers off and eat them. If it's allowed to flower, it becomes biennial. What I've got in mind is a plant I can get big broccoli heads from, year after year, without that limitation.

Edit: Three more lines of true potato seed arrived this morning form Curzio Carvati. So that'll be a total of ten this year.
Posted by Robert Brenchley at 21:11 No comments: