I had a look at that hive which split itself yesterday. The queenright part is going great guns. The part which was queenless has a reasonable amount of stored honey and pollen, eggs and open brood in a good pattern, and capped worker brood with a lot of gaps, as though some of the larvae are being removed. They're obviously not happy as they have three classic supersedure cells. 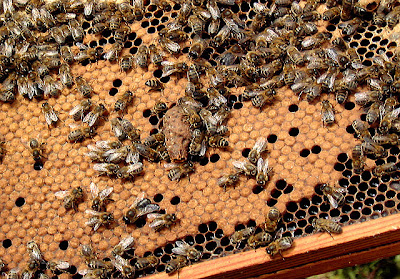 This isn't my pic - the bees are blacker than mine, and that cell's hatched - but this would be a typical supersedure cell. The bees build very few, typically in the middle of a frame. If they're preparing to swarm (highly unlikely in September!), then they build a lot more cells, usually along the bottom and edges of the frame. ﻿

The bees usually understand what's going on far better than the beekeeper. There's evidently something wrong with the queen, and so they're raising a new one. I still have a few drones, though they've chewed out the remining drone larvae, so there's no reason why the queen shouldn't mate successfully.

The local bees are hybrids, with a good deal of native blood. There's a lot of Italian in there, as very large numbers of Italian queens were imported after the First World War. There will be some Carniolan, from central Europe, and doubtless traces of other stocks. The old native British bee is known for its habit of retaining drones late, sometimes keeping a few through the winter, and superseding at this time of year. I've been hoping I could bring this tendency out in my bees, as many strains, usually those with more imported blood, get rid of their drones earlier in the season. I don't want my queens mating with them if I can avoid it. It's going to be interesting to see whether theat colony comes through the winter!
Posted by Robert Brenchley at 09:27 No comments: