I've really neglected this blog recently, but never mind. Hopefully this year will be better in terms of both weather and health. The allotment's been a sea of mud most of the winter, when it wasn't covered in snow, and I haven't managed much at all. Three bee colonies have died out, two due to nosema (I should have changed their comb last year), and one probably thanks to a badly mated queen.

I've reached the point of trying to make up my mind which peas to grow. 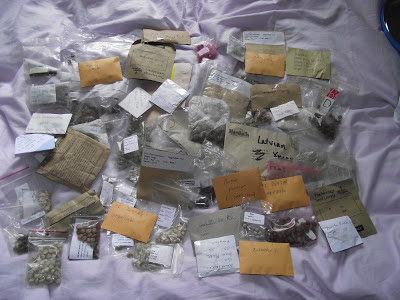 As you can see, I've accumulated a lot of varieties, some of which are vanishingly rare. I'll grow several of the ones I have plenty of seed for, to produce a crop, and as many of the others as I can, to save seed. I'm particularly interested in some umbellate varieties I've managed to get from the States.

These are one of the earliest types of sweet-tasting pea, bred in southern Europe in the second half of the 17th Century. The earlier field peas were grown for animal feed and savoury dishes like pea soup and pease pudding. They crop abundantly, and are full of goodness - the oldest known variety, the Carlin Pea, which was recorded in  1562, is said to be 25% protein - but they're not sweet tasting unless you pick them when they're immature.

The new types caught on, and were introduced to England by Charles II's court; they remained popular until the early 19th Century, when they were superseded by the first of the modern wrinkled types. As far as I know, the only umbellate, or crown, pea currently being grown in the UK is the Salmon Flowered pea; it's about four feet high, and crops lightly. Like the others in thes group it has a growth defect known as fasciation; the stems are thick, and the flowers and tendrils are borne at the top of the plant. All the flowers come out together, unlike most peas. 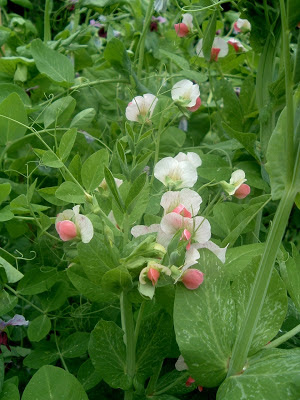 I've got two packets of 'Umbellata' with accession numbers; they presumably came form a seed bank. There's 'Mummy White' and 'Mummy'; 'Mummy White' is said to be umbelliferate, of it's the same one I've read about, and I know nothing at all about 'Mummy'. There was a craze for all things Egyptian after Britain siezed the country during the Napoleonic Wars, and one of the tourist scams of the day was to 'discover' peas while unwrapping a mummy. They were sold to the unsuspecting at suitably inflated prices, and inevitably turned out to be just like any othe pea of the period. A similar craze followed the discovery of Tutankhamun's tomb in 1924, and produced a rash of peas with names like 'Tutankhamun' and 'King Tut'. Going by photos I've seen, some 'mummy pea' varieties are umbellate, some aren't. I can't wait to see what these come out like!
﻿
Posted by Robert Brenchley at 13:10 3 comments: