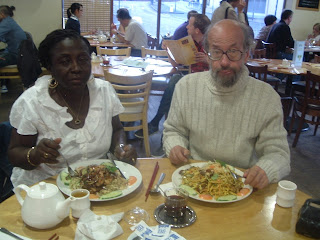 This is us out for a 16th anniversary meal yesterday. People forecasted disaster, tried to sabotage the wedding, claimed Namissa was only marrying me to get her stay here. Our minister at the time wrote and asked me not to go ahead since she's Muslim. Despite it all, we've failed to murder each other, divorce, or do anything else to cause an irreparable breach, and as you see, we're still together. We've never had a single row about religion either. It's the same God, and beside that, what else matters?
Posted by Robert Brenchley at 17:25 4 comments:

I'm beginning to think this may be the year my hedges finally get sorted. I'd given up on cordless tools; a hedge trimmer I had a few years ago was hopeless. But people kept telling me the recent ones are OK, so I bought a Flymo Sabrecut hedge trimmer; it comes with a massive 24 volt battery that goes on your waist, and appears to be the nearest thing to a heavy-duty model out there. I've been pleasantly surprised. It cuts branches as thick as the ones the petrol cutter I used to struggle with could cope with. At the same time, it's far more manageable. It cuts the top of the hedge without my needing to stand on anything, and the battery lasts longer than I do

At the moment I need the loppers for the heavier stuff, particularly along the top of the hedge where I can't get the leverage I can on the side. Once it's done, though, it cuts smaller twigs with ease, so it should be easy to keep the hedges under control. I've said it before, but it should happen this time!

I wish there was a cordless strimmer as good. I looked at several models, and plumped for a Bosch ART 23 li, with a lithum battery. I like the blades it uses rather than cord; they don't last that long, but they work out about 30p each on eBay, so it's not expensive to run. It does the job adequately, but still feels somewhat underpowered. The battery lasts long enough to see me through the amount of strimming I'm likely to do in a day. It would be better with an 18-volt battery rather than 14.4, but I don't need anything like the overpowered petrol thing I used before. Not only did it give me backache, it once cut straight through a plastic bucket. There's no call for that!
Posted by Robert Brenchley at 23:12 No comments:

I planted out 40 sweet corn today; they're a bit late, but they weren't potbound so they'll be OK. There are more to do tomorrow. I meant to chop a few feet of overgrown hedge, but I looked at it and wilted in the heat. The thing's quite intimidating, given the difficulty I have handling the hedge cutter. I've ordered a battery powered one (it should have been delivered on Friday, but they didn't knock, and I had an email to say that they'd 'been unable to deliver', and would I rearrange it. It's a recurring problem; I hope it comes tomorrow. It won't do the overgrown hedge, but I should be able to handle it easily, and if so, I can keep the young growth in order from now on. There's a strmimmer comig as well, which will be more than useful. I had battery powered ones some years ago; they were OK for about a year, but the batteries gave up on me. I'm assured they're better now.

The wasps' nest has now grown to the point where it's stuck to the hive roof, and I can't take any more pics till it does out at the end of the season. I've still got lots of bees round my empty hives, but they haven't moved in yet. Hive 3 - the big one - has nine frames of brood; Hive 5, the swarm, has five and a half, and is building up steadily. There should be honey soon, and it's coming in nicely.
Posted by Robert Brenchley at 18:24 1 comment: