A summary of what I've planted so far..

So far it's been mostly round-seeded peas, which are a lot tougher than the sweeter wrinkle-seeded varieties. I've still got to get my onion sets in, but I haven't been well all week. At the beginning of the week I just about managed one tray of peas and ended up with my head spinning. I'm getting a bit better each day, so maybe next week.

The first five are all mangetouts. Kent Blue is excellent, very sweet, and best harvested when the peas are almost full-grown. Goldensweet is possibly very old, possibly imported from India. Carouby de Mausanne is a giant sugar pea with five-inch pods. These were widely grown in Victorian times, but have almost disappeared.

Salmon Flowered, the Umbellatas and Mummy White should all be umbellate; Salmon Flowered is the ony one I've gown before, so it's going to be interesting to see what they all turn into. Serpette Guillotteau is a round-seeded French variety which I find very productive, and Robinson's Purple Podded is as the name implies, a purple podded variety from Robinson's Seeds. Again, it's very productive.

Carlin Pea is the oldest known variety, recorded from 1562, four years after Elizabeth 1 came to the throne. The peas are apparently about 25% protein, while modern varieties are more like 5%. Latvian looks rather similar, and they both have speckled seeds, which are unusual in a podding pea. It may be another very old one, but there's no written history.  Biskopens has deep, reddish chestnut-coloured seeds, and that's all I know about it. The varieties I've grown before are all quite tall by modern standards. Kent Blue and Salmon Flowered are relatively short at around four feet, the rest average about five feet.

Ragged Jack Kale, saved last year. It's the first time I've tried saving brassica seed, and I'll be interested to see whether it comes true. It should do. It's an old British kale, quite small as these things go, which looks much like Red Russian. I've read that it may once have been a perennial, but was  reselected as a biennial by Victorian seed merchants.

Daubenton's Kale, ex HSL. This perennial rarely sets seed, and is normally propagated by cuttings. I already have a variegated variety.

Eewige Moes kale. Via a seed swap; it sounds very much like Daubenton's; there are about twenty known perennial kales. I'm told:

'Perennial kale, very old Dutch heirloom dating back to 1800's and some suggest maybe even as far back as the Roman era. Grows 3-4'' high  with dark green leaves which can be harvested year round, young leaves are good as a spring type cabbage early in the season. Grow in full sun although will tolerate some shade, can be grown from seed or cuttings.'

Kailyard Kale. From eBay, this may be the same as or similar to Cottager's Kale. It's a hardy Scots varietiy, and I know no more about it than that.

Couve Tronchuda. This is an old Portugese type of cabbage. The particular variety, which is nameless, comes from Thomas Etty, and should be hardy, unlike Portugese varieties. I've tried these, and failed to get them through the winter, so I wasn't able to get seed.

Violetto di Sicilia cauliflower. This is via a swap. Seeds of Italy do a similar or identical purple variety, and I believe it's similar to an old British one, Purple Cape.

Drunken Woman. Looseleaf, with red and green leaves. And to continue the misogyny,

Fat Lazy Blonde.  A large loose butterhead, which has been around since at least 1850.

This is seeds, not seed potatoes, which are small potato tubers. It's used for breeding.

Skagit Magic This line has some blight resistance. It's a late main, which could perhaps be either selected or crossed for earlier cropping. Some tubers are white, some have purple markings.

Russian Blue. I don't know anything about this one.

EDIT Biskopens appears to be a Swedish field pea with red or purple seeds. It's going to be interesting to see what this turns into!

Posted by Robert Brenchley at 22:34 2 comments:

I can only remember one shed burning on the site before, and that was someone with a grudge against the plotholder. We've had several plots vandalised, doors broken, a polytunnel slashed, and one shed incinerated. 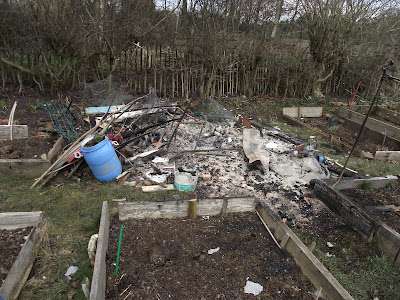 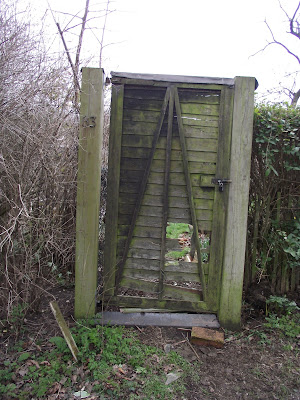 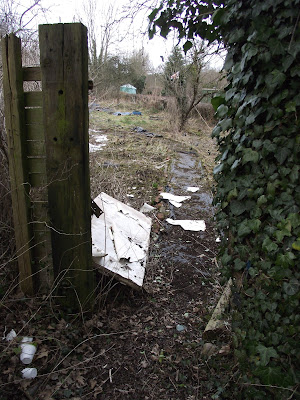 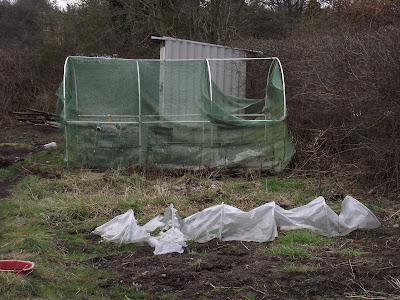 Posted by Robert Brenchley at 19:43 3 comments:

I haven't been feeling well, but I was a bit better today - a two-day attack of migraine has just about died down - so I managed to get to the allotment. The last bits of snow are melting fast. The bad news is that by last bee colony has died out. I haven't investigated, but it was going strong before the last cold spell,  and it had food available, so I'm pretty sure it'll be isolation starvation. The bees will have clustered around the brood, and it's been too cold for them to break cluster. They may all have been crowded on frames with no food.  Never mind; there are very few years when I don't have a swarm or two move in. Give it a couple of months, I'll probably have bees again.

I managed to start nine varieties of Broad Beans, in pots. Last year I started working on a grex; you plant a lot of different varieties together, let them cross, save the seeds, and keep selecting. In the end, you get your own, rather variable, variety.

Last year I planted seven varieties, but the waterlogging was so bad only three of them produced any beans. These were Wizard, a field bean type from Real Seeds, Red Epicure, a red-seeded longpod, and Dumont, a Californian grex which turned out to be extremely hardy. I've planted the hybridised seed from these, and added six more varieties.

There's Aquadulce - I was suprised not to get a single bean off these last year, as they're really tough and it's never let me down before - Fava Lungs Delle Cascine from Italy, Karmazyn,another red-seeded variety; all of these are longpods, with large seeds, and a lot of them in each pod,  and three more small seeded varieties. There's Crimson Flowered, a tender variety with, as the name implies, red flowers. This one's probably been around since the 18th Century at least. Oldambuser Wierboon is a Dutch landrace, and Kaulion Valkea is from Finland. Let's hope the rain lets up this year and gives them a chance!
Posted by Robert Brenchley at 18:41 4 comments: