It's been a lot warmer the last few days. The sweet corn and most of the climbing beans have been planted, though I've still got Cosse Violette to do. Peas, the Cosso Violetto broad beans, which are just germinating, and the strawberries have all been moved out of the mini-greenhouses to make space, and are now under cloches. The last couple of days we've hid some ominous thunder in the afternoons, but not much rain, apart from the odd afternoon shower.

Both beehives are doing well, with the broodnests expanding slowly. The native colony has the odd drone. It'll need a lot more than that though, if I'm going to get properly mated queens.

The first of the onions are appearing through the mulch, but there's no sign of the asparagus yet. I'm still waiting for my seed potatoes, which I ordered from DT Brown in mid-March. I Emailed them ten days ago and have got no reply, so I'll have to phone them.

Meanwhile, the first of the apple blossom is open. The three new trees are all budding nicely, and look healthy so far. The hedges are all turning steadily green, and it seems that spring has arrived in earnest at last.
Posted by Robert Brenchley at 20:58 No comments:

I haven't got much done for a couple of weeks due to weather and other commitments, but i planted a row of parsnips over the weekend. I chitted them for a week, sitting in a jar in the warm on damp tissue. Then I planted them just as the first roots began to show. I didn't dare leave them longer, as the roots are extremely easily damaged, and this is what causes forking. Supposedly, by doing it this way, germination is much better. I've planted four beds of onions, and the alliums are now taking up a ridiculous amout of space. I may cut onions out next year, as they're so cheap. The tomatoes, chillies and aubergines are doing well on the windowsill, and the second planting of sweet peas is starting to come through.

I combined the hive which went queenless a couple of weeks ago. Of the two remaining, the native one, which I want, is far and away the stronger. Apart from that, there's not much to report, but the temperature seems to be warming up, and hopefully things will be moving properly at last.
Posted by Robert Brenchley at 22:30 No comments: 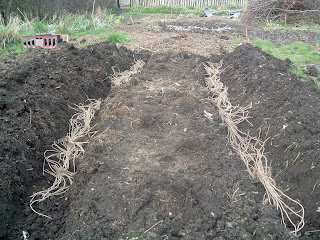 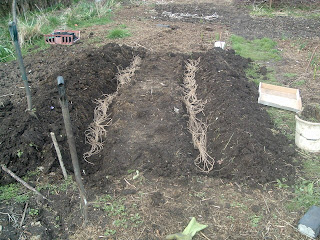 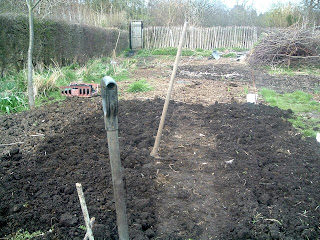 Things are progressing slowly in the garden, though I've been really busy doing extra revision classes over Easter, and the weather didn't help. We had snow everywhere last Sunday morning, but by the time I finished dealing with church business and got to the plot, it had all melted.

I've planted 20 asparagus crowns form New Park Farm in Kent; previously, I've used ones from local garden centres, and they've been no use at all. These are five times the size, some of the roots are well over a foot long, and hopefully they should be much better. They've been planted roughly six inches down in two trenches three foot six apart, one for Ginjlim and one for Backlim. These were them mulched with a couple of inches of grass cuttings. Apart from that, I've gained some more strawberry runners via a swap, and I'm halfway through planting the onions. I may cut these out next year as I'm devotong a ridiculous amount of space to alliums. The pictures show the asparagus planting; I hadn't got as far as mulching at that point.

One of the surviving bee colonies has gone queenless, leaving two. That's twice as many as I had this time last year.
Posted by Robert Brenchley at 10:36 No comments: