I spent the weekend helping with the Birmingham Association's Honey Show at Martineau Gardens in Edgbaston. It's the first time it's been held there, and we weren't sure how it would go. In the event, there was plenty of interest, and we sold all the honey we had. I spent the time sitting by an observation hive, answering questions and showing people what was going on inside it. It was the first time I've had a chance to spend several hours watching a queen; I'm not sure her behaviour was entirely normal, but she spent the great majority of the time standing about doing nothing, just laying the occasional egg. 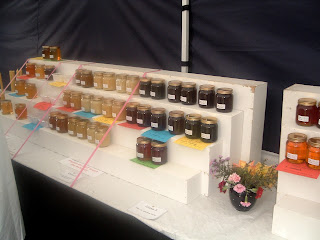 ﻿
Quite a few people entered jars of honey for the competition; the judge spent hours examining it, but I'm really not sure what the criteria are. 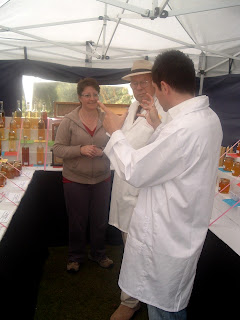 Honey sales were a great success
﻿ 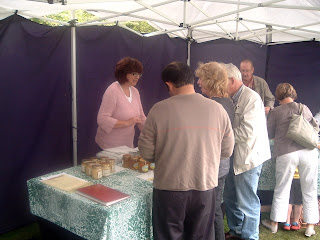 ﻿
The observation hive generated loads of interest, particularly from the kids.﻿
﻿ 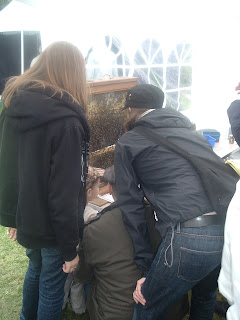 Not surprisingly, the bees didn't like being cooped up all weekend with the light streaming in, and they were fanning like mad to keep the temperature down. The're very good at this; I saw a photo in an old 'ABC and XYZ of Beeping' (an American beekeeping encyclopedia)﻿ of a hive which had been right next to a serious fire in a timber yard. the back of the hive had been burning, and the wood looked well and truly charred. The bees inside survived. 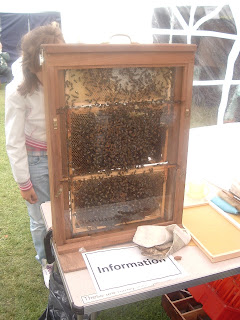 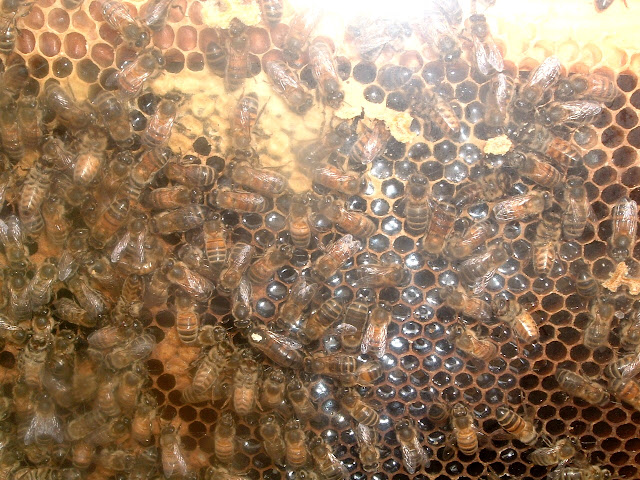 ﻿
Posted by Robert Brenchley at 23:27 No comments:

I sneaked a look at the two new splits; both have eggs, laid in nice patterns; one egg per cell, and laid in contiguous cells. It looks as though the new queens have mated satisfactorily, so there's not much to do except feed them up for the winter, and see what survives.

A lot Bramleys have been dropping off the tree, so they've been chopped up and frozen. The greengage crop isn't good this year, but I did a massive crumble, and there are plenty more.
Posted by Robert Brenchley at 22:44 No comments: