Another beekeeper passed a swarm on to me the other day. Nothing unusual about that, and I dumped them in the top of an empty hive as usual, then moved them to the bottom where the broodbox is normally placed. A lot of bees were milling about, and some were going in and out of the empty hive next door, but again that's nothing unusual. I keep empty hives set up to attract swarms, and they're quite effective. But next day, those bees were still there, and there were fewer bees than I expected. So I investigated.

Half the swarm was the second hive, with two queens. They were well grown, but with abdomens which were short as queens go, suggesting that they're either unmated or recently mated. There had to be at least one queen in the original hive or they'd all have decamped. I ran the queens in the entrance with the rest of the swarm, and put the box containing the workers on top of the first hive. They united overnight, as expected, and in a few days I'll open it up and see how many queens I can find. Despite the books, multi-queen colonies aren't at all uncommon. Our climate is marginal for honeybees, and it's an insurance against queens failing to mate in bad weather. 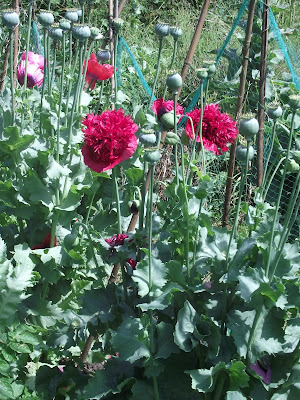 I always let a few opium poppies grow, and over the years I've selected for the best colours. This is the first time I've had doubles; I usually prefer singles, but these are so spectacular I left them to flourish. 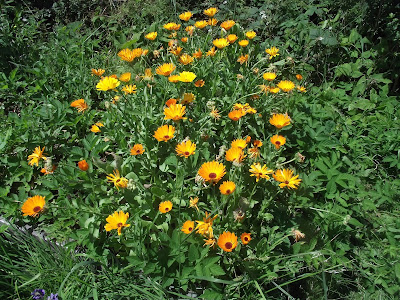 Pot marigolds are in full bloom. Parts of the allotment are in a disgracefullyt weedy state; ground elder grows in some of the newer raised beds. I'll did it out when I empty them of the current  crops. It's worked for the longer-established beds. Part of the plot is a jungle; I can't strim it as there's precious stuff in there, but building raised beds doesn't leave me the energy to do much about it either. It'll get better. 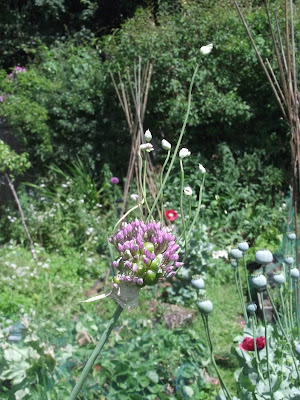 Last spring someone passed on a clump of stunted alliums with bulbs about two or three millimetres across. It turned out to be long-neglected garlic. All my garlic keeped over before it flowered for some reason. I don't know what's going on, but the same happened last year. It's well grown anyway. Meanwhile, other alliums are starting to flower. This is Babbington's leek. I've been growing on some bulbils for a couple of years, and at last it's at flowering size. It doesn't set seed, but the bulbils you see will grow. I don't know whether it's possible to persuade it to produce seed. 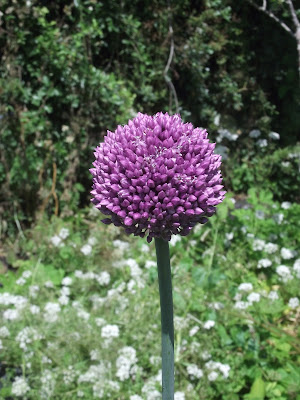 This one's Minogue; it's a perlzweibel, what the Americans call a perennial leek. It's a small clump-forming leek, which I'm told doesn't often flower. I've only had it a year or so. Most of it is dying back, but the largest produced this bloom. I'll try to grow the seeds out next year, but I don't know what viability will be like. I planted some everlasting onion this year, another which doesn't often flower. I ended up with one plant. I've got more seed in the frezer which I'll plant next year. I've got potato onions and a shallot coming along as well, but they're not out yet. 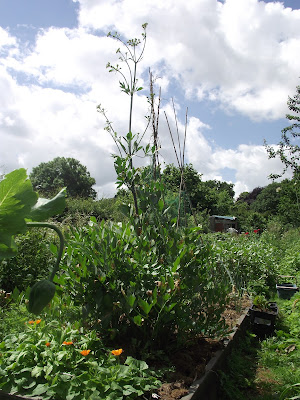 One of the lovage plants I put in last year is flowering. It's a perennial member of the  carrot family, and as you see, it's about six feet high and rather spectacular. 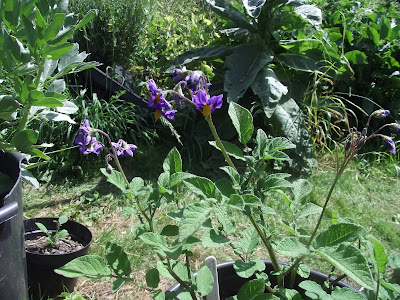 Lastly Skagit Magic, one of the potatoes I've been growing from true seed rather than seed potatoes. It's a diploid, with half the number of chromosomes most commercial varieties have, which is a pity as it seems to be immune to late blight, a disease which is the bane of potato growing. Like many diploids, the flowers are a far cry from the usual whites and insipid pinks.
Posted by Robert Brenchley at 22:07 No comments: