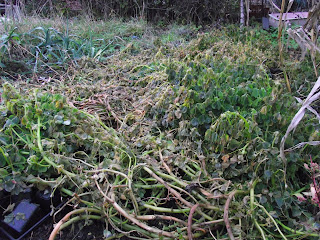 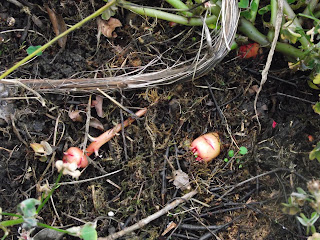 This is now dying back after having been frosted during the week. As you can see, a crop appears to be forming. I'm not lifting anything till the top growth is completely dead.

I need to add more varieties for next year, to increase my chances of getting seed. I always get a few flowers, around October, but I haven't seen a seed pod yet. Once I have some, that starts a process of selection for plants which will flower, and set seed, reliably in our climate. It works with cacti. South American species which were exceedingly shy bloomers in Britain when they were first grown here, have now adapted after a number of generations, and flower reliably. No reason why the same thing shouldn't work with oca!
Posted by Robert Brenchley at 16:15 2 comments:

I've been minus a camera for a bit but I now have a replacement. 12 megapixels, so I'm anticipating having to make reduced versions of pics for the internet, and the contrast is far better than the old one. No need to enhance it digitally! So here are some of the first pics, taken on a very dull day, and uploaded as they come. 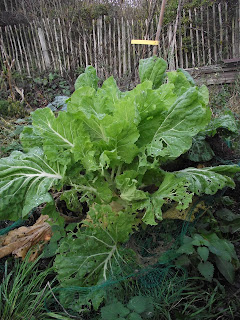 This is Gloire de Portugal, a variety of couve tronchuda. It's a rare old Portugese cabbage type, loose leaved as you see. It's a dual purpose vegetable; you can cook the midribs as well as the rest of the leaf. They're good in stirfries. Harry Dodson makes much of the lack of cabbage smell when cooking it in 'The Victorian Kitchen Garden', but I tend to give everything minimal cooking, and it cabbage never smells when I do it! ﻿It tried to bolt during the autumn, possibly because of the drought. I picked off the flowering stems as they appeared. As you can see, it's a large plant. The only source I know of for (generic) couve tronchuda in Britain is Thomas Etty, and they suggest planting a foot or two apart. Two and a half to three feet would be more like it. Some plants have done well despite the drought, others poorly. 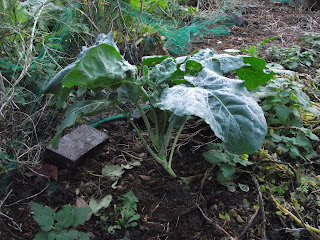 'Spis Bladene' (not its proper name; it was written on the seed envelope, and means 'good eating') from the HSL. It's pretty stunted, no doubt due to the drought. They say it's a perennial kale, but I know no more than that. As I only have three small plants I'll probably cut it back when it tries to flower, see if it does regenerate, and plant more next year. With any luck, that might give me a better number of plants for seed saving. 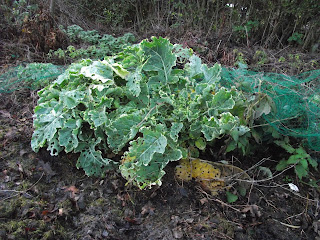 Variegated Daubenton's Kale, looking rather tattered and squashed as the slugs like it, and it's had net draped over it. It's a perennial, non-seeding kale; I'm planning to take cuttings in the spring. I also have Taunton Deane, a similar, redder, variety. My one plant's rather small, slug-eaten, and thoroughly unphotogenic.
Posted by Robert Brenchley at 19:57 8 comments: