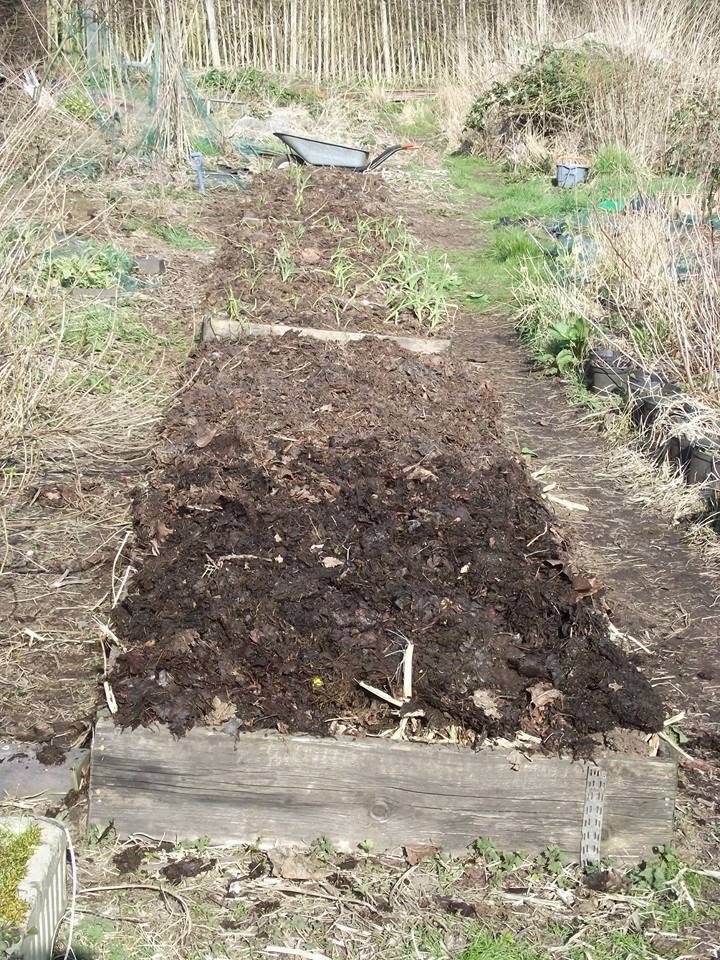 It's going to be a long haul after seven months away from the plot, but Ive started getting things sorted.  The three raised beds I managed to build last year have been cleaned, topped up, and planted. The one closest to the camera has my racist potato, Negresse, in it.

This is a 200-year-old (or thereabouts) French variety, with deep purple skin and violet flesh. I haven't had any luck with it so far; I grew it for several years, or tried to, but blight, which is endemic on the site, hit it year after year. Like all very old spuds it's a late maincrop, and the tubers don't begin to swell till October. So blight coming around midsummer meant that it barely produced tuvbers big enough to survive at all. I wrote it off.

Last year, we had a dry summer, and no blight. The few plants that managed to survive being swamped by massive rat-tailed radishes produced enough tubers to plant up a bed, so I'll see how it does this time. After a dry summer, there should be a lot less blight on the site this year, other things being equal.

The other beds are planted up with alliums. I'm now digging as fast as I can go, trying to get two more beds done in time to get the broad beans planted out in them. These are already started, in pots. Sixteen varieties and mixes, with a tremendous range represented. Big seeds and pea-sized seeds; red, green and almost white seeds. One variety has deep red flowers, and one pure white. I'll see what I end up with in a few generations!
Posted by Robert Brenchley at 19:26 No comments: