I've just been through the hives. I came home from school with a splitting headache, and it's one way of distracting myself. Hive 3 still has 3 1/2 frames of brood, but the area covered is still increasing. Hive 4 is on 2 1/2 frames. Both of those will have a lot more bees hatching out in a week or two, so I'm expecting more expansion soon. The queen in Hive 5 has been really busy, with big areas of eggs and young brood on five frames in the 14x12 box I put on top of the original standard broodbox. I don't like standard National broodboxes, they're on the small side. There will be masses of bees hatching out of that one in three weeks or so, which fits in nicely with my plans for an early round of queen raising.

If I use eggs from my best colony that should produce an instant improvement in temper in Hive 5, as this is controlled by substances given off by the queen. It won't deal with the following though. This is a tendency to buzz around people, and it's not only a nuisance, it leads to stinging as people panic. It's inherited by the individual worker, so at best it won't disappear until the last of the offespring of that queen dies. It may not vanish then, as the new queen will inevitably mate with drones from that hive, which I'm depending on for this round as they're the only ones I have so far. In that case, it'll be with us all season, as I won't be raising the second round of queens until all the drones from the first one have died off. Drones come from unfertilised eggs, so they're not affected by what their mother has mated with.
Posted by Robert Brenchley at 21:07 No comments:

I was at the BBKA Spring Convention yesterday, at Stoneleigh, near Coventry. I got to talks on bee anatomy, queen raising and nosema. The latter is a serious bowel disease of bees, caused by a microscopic fungus. There's a new form, nosema ceranae, which has hopped across from the Asian Honey Bee, Apis cerana. One of the people doing the research on this was speaking; it may be extremely serious or it may not be, and it's such a recent discovery that nobody really knows yet. One thing is certain, it's spread round the world at an incredible rate, doubtless because of people moving bees around. I've always felt that this is a very bad idea, but it's almost impossible to stop, and even if it was, we'd still have swarms landing on ships and being carried all round the world.

Hives 3 and 4 are still expanding steadily; Hive 3 is on 3 1/2 frames, while 4 is still on 2 frames, but expanding the brood area on them. I'd be happier if it had a bigger broodnest as I'll need to take eggs out of it soon to raise queens. Mulching all the spuds is taking time, largely because it's doing my back in.
Posted by Robert Brenchley at 21:02 No comments: 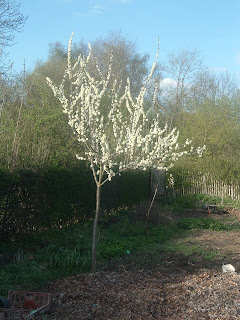 Hive 3 - the one I combined - has now settled down, with brood on 2 1/2 frames, and masses of eggs, showing a rapid expansion of the broodnest. That's what I like to see at this time of year; it means a lot more bees in three weeks' time. Hive 4 is still on two frames, but again with loads of eggs. Hive 5 is on six frames, the same as last week. A few drones have hatched, so I'll soon be able to raise queens. The dandelions are starting to flower, and there was lots of orange-yellow pollen from them coming in.

All the potatoes are now in, and I've started mulching them all with dead leaves. There are very few grass cuttings yet, but they should be coming in very soon with the warmer weather. It's at this stage that I need to watch my back; last year I strained it badly, and it restricted what I could do all season.

The Canbridge Gage is covered in bloom, with bees going the rounds of the flowers. Hopefully, I'll get a good crop to make up for last year, when it all rotted on the tree. There's a single flower on the Victoria plum I planted last year; hopefully, there will be a crop next year. After losing the first one I planted to the drought three summers ago, I could do with some noce big plums!
Posted by Robert Brenchley at 09:04 No comments:

More bee problems; the queen in Hive 2 disappeared last week. I opened it to find no eggs or open brood. I saw her last week, and there were eggs then, but she must have just stopped laying, or there would still have been a little open brood when I looked. It was probably down to poor mating in the awful weather last year.

With Hive 3 dwindling fast, I combined the two. I suspect the problem there was a fungal disease, Nosema, though I did treat for it last autumn. Hopefully they'll pull through. It's infuriating though; if that queen had just lasted another couple of weeks, I'd have been able to raise a new one.

I've spotted that Hive 5 has more mites than the others, despite having been given the same oxalic acid treatment on the same day. It had quite a large patch of brood all winter, and they must have been in there. That explains the bees I keep seeing with crumpled wings due to a mite-vectored virus.

I've got most of the potatoes in now; Pink Fir Apple is the only one left. It's been hard going as a lot of the area has had to be dug before I could plant. I've put in a dozen tomato varieties, which are coming up merrily.

I had a seed swap parcel the other day from some of the people from Allotments4all; several of the toms came from there. I don't know what I'd do without that site, it's priceless. I'm getting beans, squashes and sweet corn as well, and I'll add some more toms before I send it on.
Posted by Robert Brenchley at 22:54 No comments: