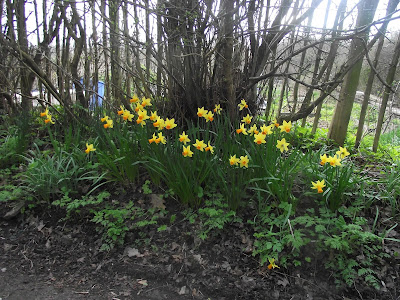 I haven't posted about the plot for ages. I was off it most of last year due to losing an eye and being poisoned by some medication. But I've managed to pull a lot of it back, though it's still a pretty disgraceful mess.

These narcissi came to me via a dumped container. I don't know how  long they'd been in it, but the bulbs were on a sorry state. They've been in the ground for several years, and finally seem to have recovered. Some other bulbs from the same container still haven't flowered, and I don't know what they are. Maybe they need moving. 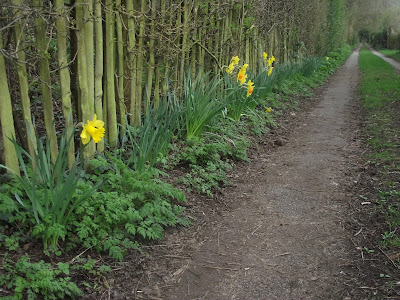 The daffs I put on the other side of the lane have sufffered due to being repeatedly strimmed in May, which is far too early. Hopefully the cuts may have put a stop to that at least. 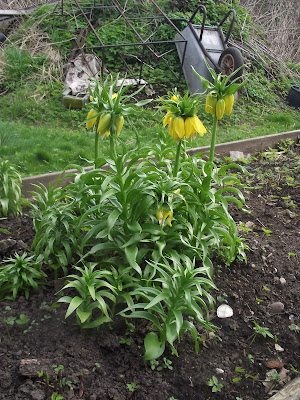 The crown imperials have also suffered. I just had the one flourishing clump; at their best, they were magnificent. It was the only spot I could get them to grow; they really don't like waterlogging. Then we had a couple of soaking wet summers which nearly finished them off. Last year, after being moved, they were miserable, but this year they're a lot better, though still stunted. Give them a year or two, they'll be back in all their glory. 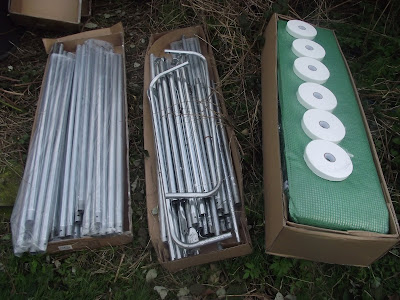 My new polytunnel Can't wait to get it up!
Posted by Robert Brenchley at 19:37 1 comment:

Good Soil: Manure, Compost and Nourishment for your Garden 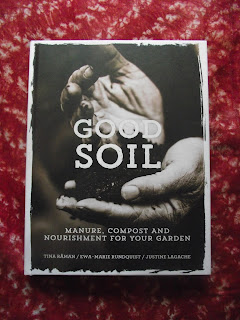 I’ve never come across a comprehensive book on soil for gardeners before. There was a time when I taught about soil in school geography, but gardening books tend to be interested only in how to change it and make it do what you want.
That means a lot of work. There’s an old BBC TV series, the Victorian Kitchen Garden, about the garden attached to a stately home on the chalk. At one point it shows the difference between the soil in the garden, a couple of feet of fertile stuff, and that in a neighbouring field, a few inches deep, and not particularly fertile. The difference would have been deep digging, stone removal, and huge quantities of manure, over many years. The mind boggles at the man-hours it must have taken.
The important thing about soil is to understand it. No two sites are ever identical, and what’s right for my allotment will probably be totally wrong for someone else’s garden. A thin chalk soil would need different treatment to, say, the moorland where I used to live in Cornwall. There’s an introduction to soil types, which is as much of the technicalities as you need. Observation will supply the rest.
My plot is right next to a stream, and a few years ago, the waterlogging got so bad I set out to build raised beds. It brought everything else pretty much to a grinding halt while I managed half a dozen each year, but the bulk of it was done in the end. There’s still a fair bit to do, but the rest can go at a more sedate pace. My approach was to dump in anything organic that was available. So I used garden compost, hedge cuttings, woodchip from a tree surgeon, autumn leaves, and grass cuttings, and gave each bed a couple of inches of soil on top. Then I planted straight into them. One bed killed my potato onions with a bacterial rot, but that’s the only problem I’ve had, and after a couple of years, everything but the biggest sticks had rotted down into a nice organic soil which is completely different from the silt underneath it. Things grow which never grew before.
Composting is equally haphazard. I have five compost bins, and just chuck everything in, including cardboard egg cartons and the odd dead rat. Once it’s rotted, I spread it wherever I need to fill, or top up, a bed, and cover it with an organic mulch to deter any weed seeds wanting to germinate. Nothing except the occasional dock ever survives, and they’re easily picked out and chucked back for another year. It works, so why make life difficult for myself? The book covers the outlines of the process, and you really don’t need more unless you really want to make extra work for yourself putting the ‘right’ mix of ingredients into your heaps, and turning them regularly to speed up the process. The other thing I use is human produced liquid manure, which the authors describe as ‘liquid gold’. It’s a good source of nitrogen.
Mulch is the key to a lot of my gardening. Keep beds covered with a couple of inches of something organic and not many weeds will get through, while the worms will gradually take it down and keep the soil well nourished. This is covered briefly; one area which could have done with more detail.
The book’s pretty comprehensive. Everything finds its way in, rather like my compost bins, and emerges in digestible form. All told, it’s earned itself a permanent place in my bookcase
Posted by Robert Brenchley at 18:02 No comments: