Hive 6 is deserted. There's dead brood, two dead queen cells, and no bees live or dead. I can only assume they all went back to Hive 5 next door. The honey has been completely robbed out. This never happens in hives with my standard reduced entrance, but I didn't have one spare, so this one ended up with a wide-open entrance. I noticed bees going in and out, not wasps, so the honey is presumably in the other hives.

I'm digging over a patch I dug earlier in the season. It had a big patch of bindweed, and there's still some left. I may not have done very well growing veg this year, but at least there's a lot more ground free from perennial weeds, which isn't going to need any more routine digging.

Some of us spent Saturday learning to identify apples. We've got around 70 old apple trees on the site. Many have been idnetified already, but there are more to do. While most are common varieties, there are some rarities as well. As far as we know, it's a unique feature of the site, and we want to maintain it, by replacing trees as they die off. I know, for instance, that there were once three apple trees on my plot. All I found was a few rotting logs, and many others have gone the same way. I've planted trees to replace them, and we've now planted a communal apple orchard at the end of the site, on a plot that was completely derelict.

Last year we had a day to learn how to prune them. Some of us are now planning to get some apple books, and try to identify as many of the remaining trees as we can.
Posted by Robert Brenchley at 23:39 No comments: 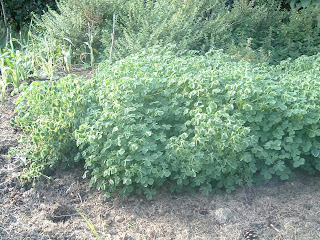 This is the oca I planted last spring, sprawling all over the place. It doesn't do much until midsummer, then starts spreading. It's a South American root vegetable; the tubers swell as the shoots die back, so I won't be lifting it till all the top growth is dead, in late November or December. It's about my one success story this year, so I'm looking forward to it!
You probably remember that Hive 5 used to be very large, and nasty-tempered. About half the bees had a yellow stripe, and it was full of drones. I had a look yesterday. All the bees are black, and extremely quiet on the comb, just like Hive 4. I can only imagine that the queen, raised from an egg laid in Hive 4, avoided mating with drones from her own hive, and mated selectively with Hive 4 drones. These may have shared a mother with her, but will have had a different scent.
Hive 4 has lots of honey in the broodbox, so no worries about that one. I'll give it a gallon of feed with Fumidil-B in it, for Nosema, and that's all. Hive 1 is fine, but it doesn't have so much honey stored, so I'll give it candy just in case. It's a lot better off than any of the hives were this time last year, though. Hive 5 has some drones, so there's something for the new queens to mate with. I'll check them out next week and see what's happening.
Posted by Robert Brenchley at 09:40 No comments:

I've been feeling a bit better today. I managed to dig a patch of bindweed which was spreading out across the ground and rooting as it went. I split Hives 4 and 5. I was hoping 3, the split from 4, would raise its own queen cells, but it failed to do so, so I gave it a cell, and gave another to the split from 5,which is now Hive 6. I left a cell in the top story on Hive 3 as well, and we'll see how many of them mate successfully.
Posted by Robert Brenchley at 19:44 No comments:

It's not been a good week for me. I was in casualty, briefly, the other night - nothing serious - and I've been fit for nothing most of the time. I've checked Hive 1, which now has a laying queen again, and done a vertical split with Hive 2. It's now raising queen cells in the top box. Meanwhile, most of the fruit have been blown off the Cambridge Gage, and the slugs have had a feast, losing me most of the crop.
Posted by Robert Brenchley at 17:43 No comments: