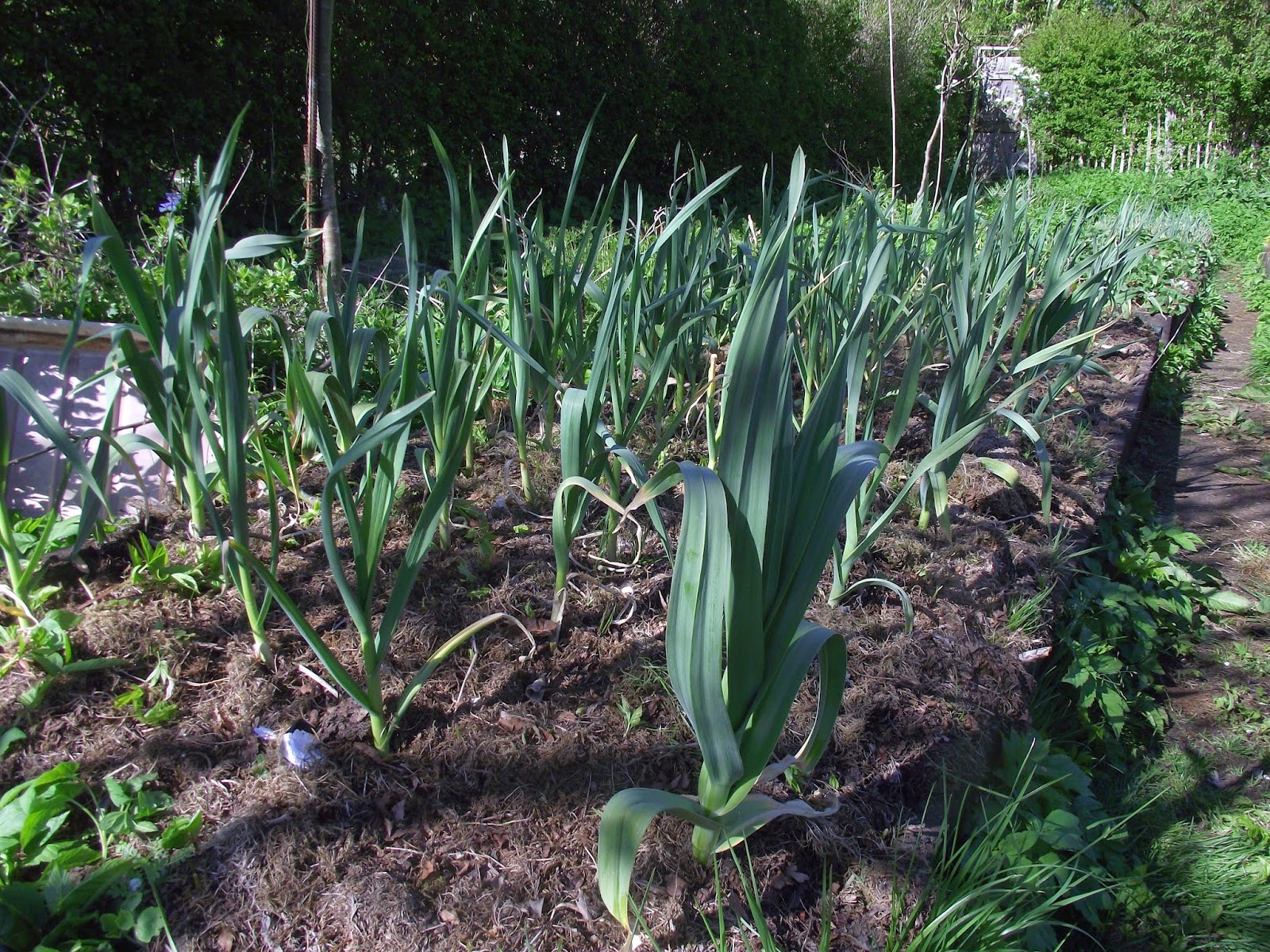 Garlic, elephant garlic in the background, and Babbington's Leek in the foreground.

I've planted two varieties of garlic, plus some solo garlic someone sent me. This forms garlic rounds a couple of inches across. I don't think it's a special variety, I think it's been inhibited from dividing somehow. It hasn't emerged, which is strange, but when I investigated, the bulbs were still there, with established root systems. All rather odd!

The two latter varieties are very similar above ground, with Babbington's being, as far as I can see, less strong-growing. It grows wild in a few places in the UK, but it's not clear whether it's a true native. I was sent bulbils - it's a topsetter which produces small bulbils in the flower head, and doesn't set seed - two years or so ago. the plants are in their third season, and a couple of them are budding. You can see the bud just appearing here. 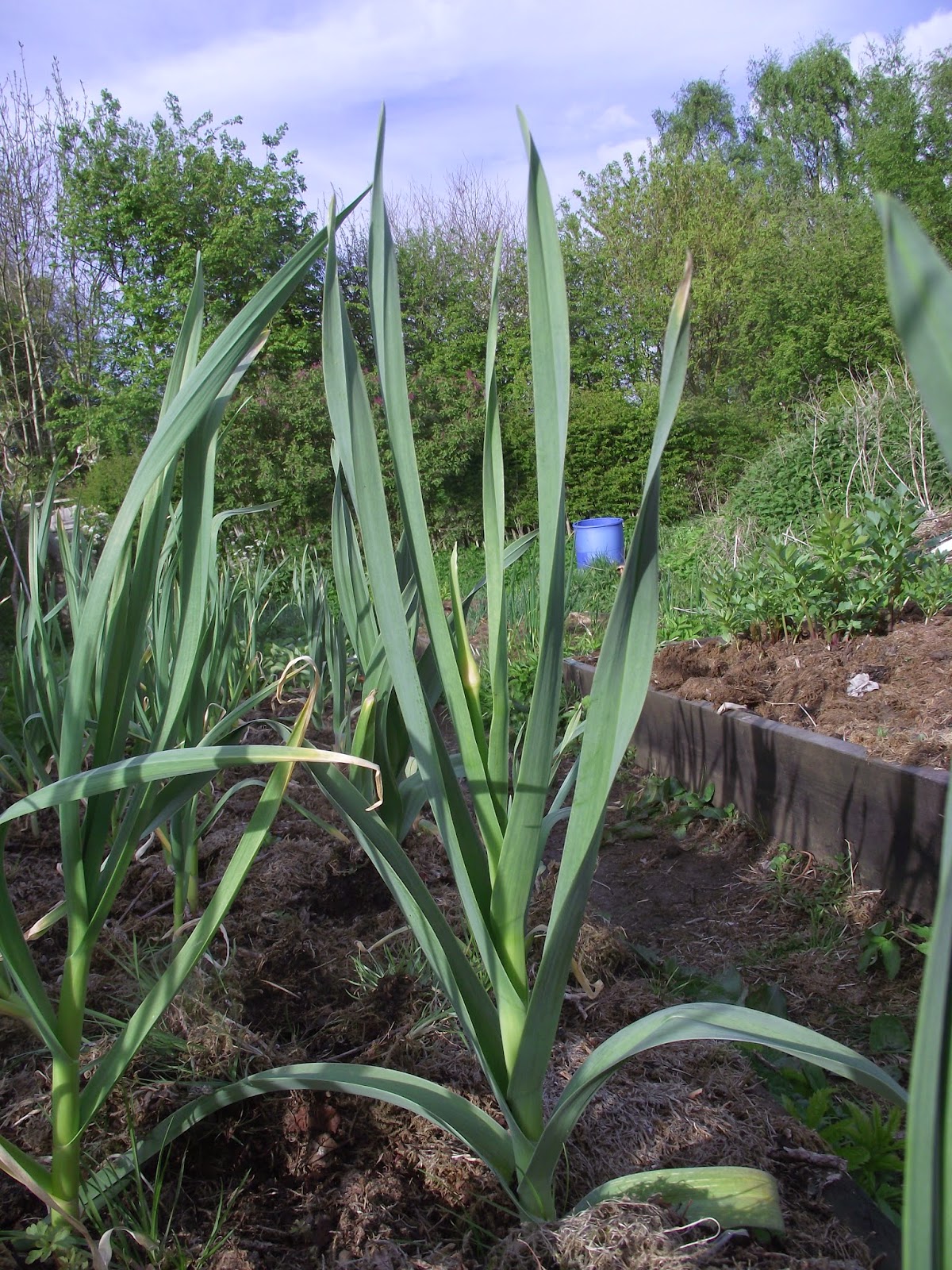 The plant has a typical leek structure, with a 'stem' formed of tightly rolled leaves. The big difference is below ground. Elephant garlic has a garlic-like root the size of a fist, with half a dozen large cloves. It tastes like extremely mild garlic. Babbington's has a single bulb. I haven't tried it yet, but apparently it has a garlic taste as well. 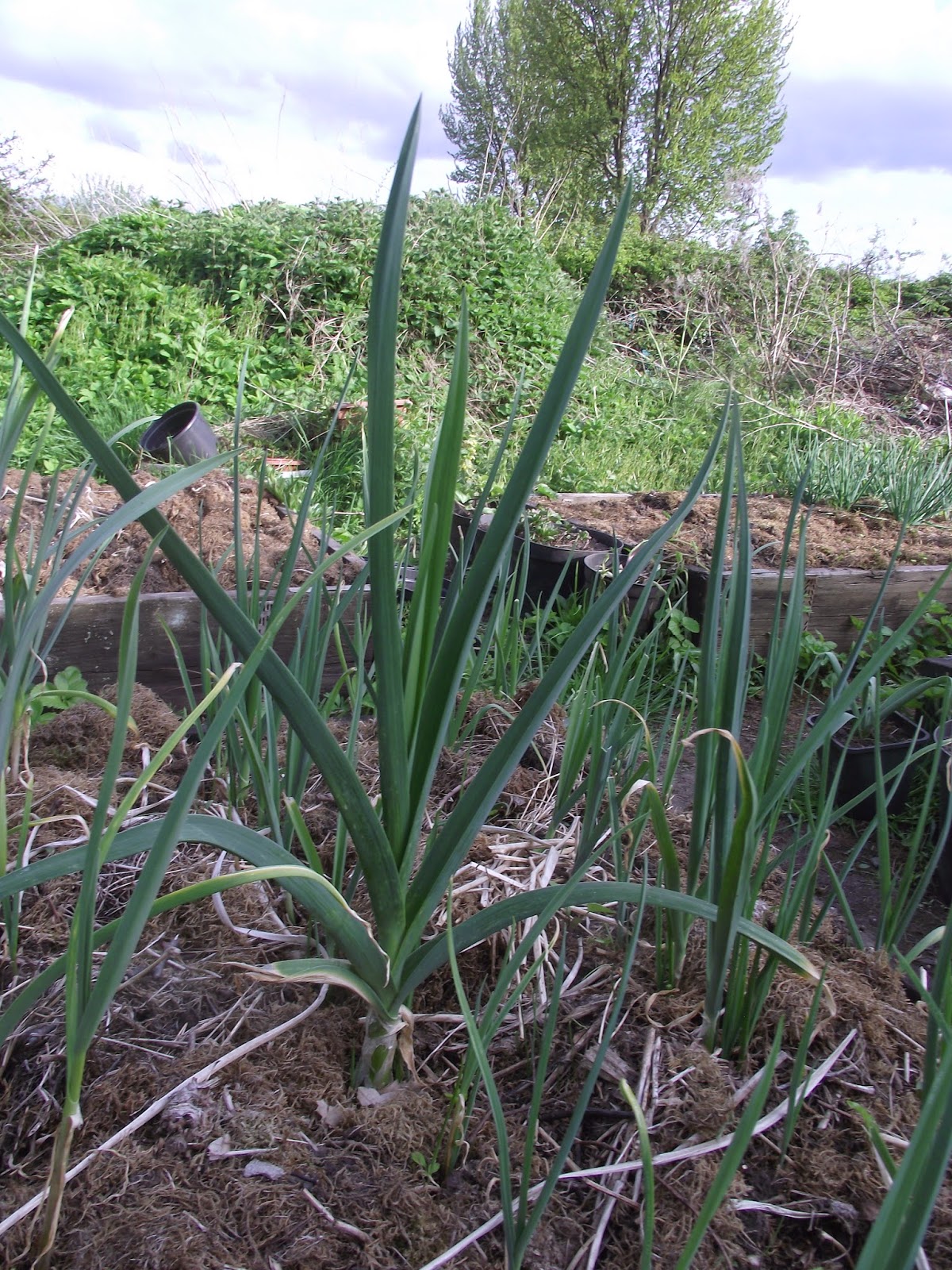 This one's 'Minogue', an example of what the Germans call 'pertzweibel'. It has a small white bulb, which produces offsets round the base which look rather like pearls, hence pearl onion. The name, unfortunately, is applied to such a plethora of small onions that it's worthless from a gardening point of view. It's definitely a leek, and may well be the same as the American 'perennial leek'. 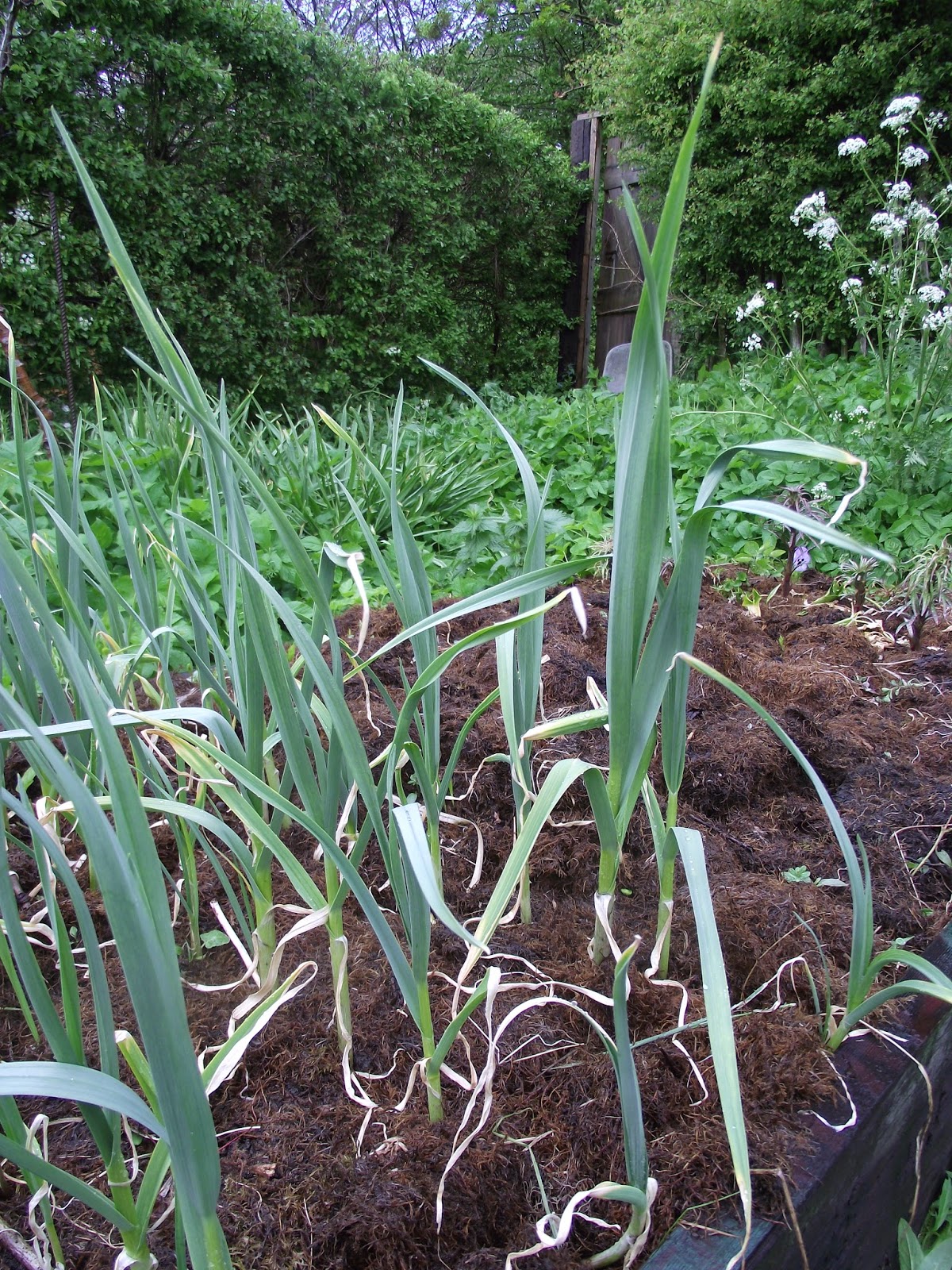 This one's a mystery. It was passed on to me last year by another plotholder. I split up the overcrowded clump of miserable little things and gave them room to grow. The bulb is greenish, and the biggest I've seen was about an inch across. I don't know how big they get. It multiplies by splitting, and appears to be another leek. That's the sum total of what I know about the plant, except that both it and 'Minogue' have a nice onion taste, they stand well through the winter, and I've named this one 'Guinea Garden' after the site. 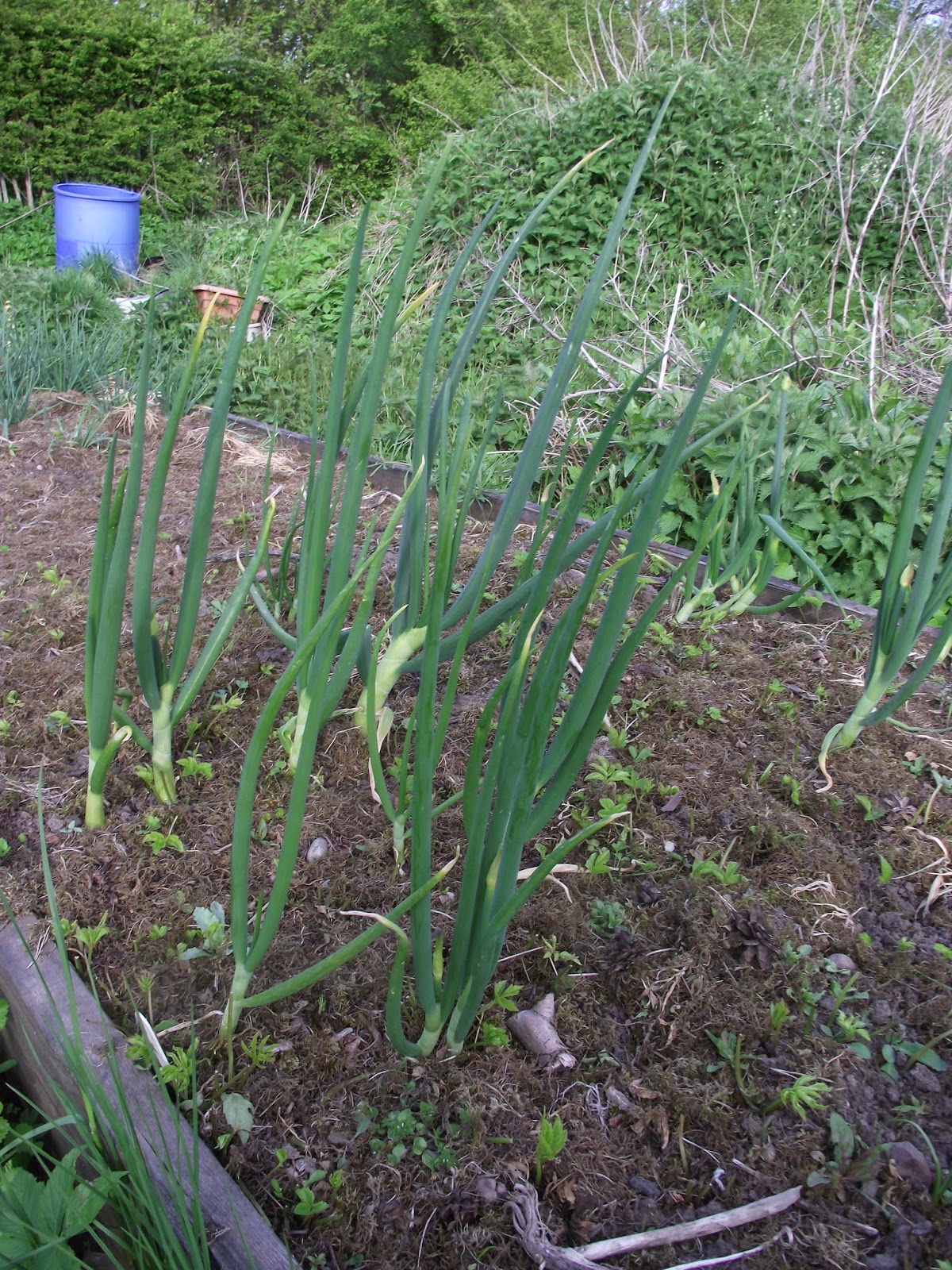 These are topsetting onions. You can tell they're onions by the tubular leaves. It's a green onion, which, like Babbington's, produces bulbils at the top of the flowering stem. Many alliums will do this quite easily, but some use it as an alternative to seed production. I've gained five varieties of topsetters over the last year, and it's going to be interesting to see what the differences are, apart from size. All of them have at least one or two plants producing buds, though they take a couple of years to really reach full size from bulbils.

You can see a bit of ground elder coming through. I build this bed a year ago, with a base made of thick brown cardboard. It kept the weeds back for several months, but the ground elder, much weakened, made it in the end. Constant pulling should weaken it further. My strimmer is dead, and not worth repairing, so I need a new one to keep it down between the beds. This time I'm going for a petrol one. I don't like them, but while they get better all the time, battery ones have never been up to the job, and the good ones are more expensive than a petrol job. 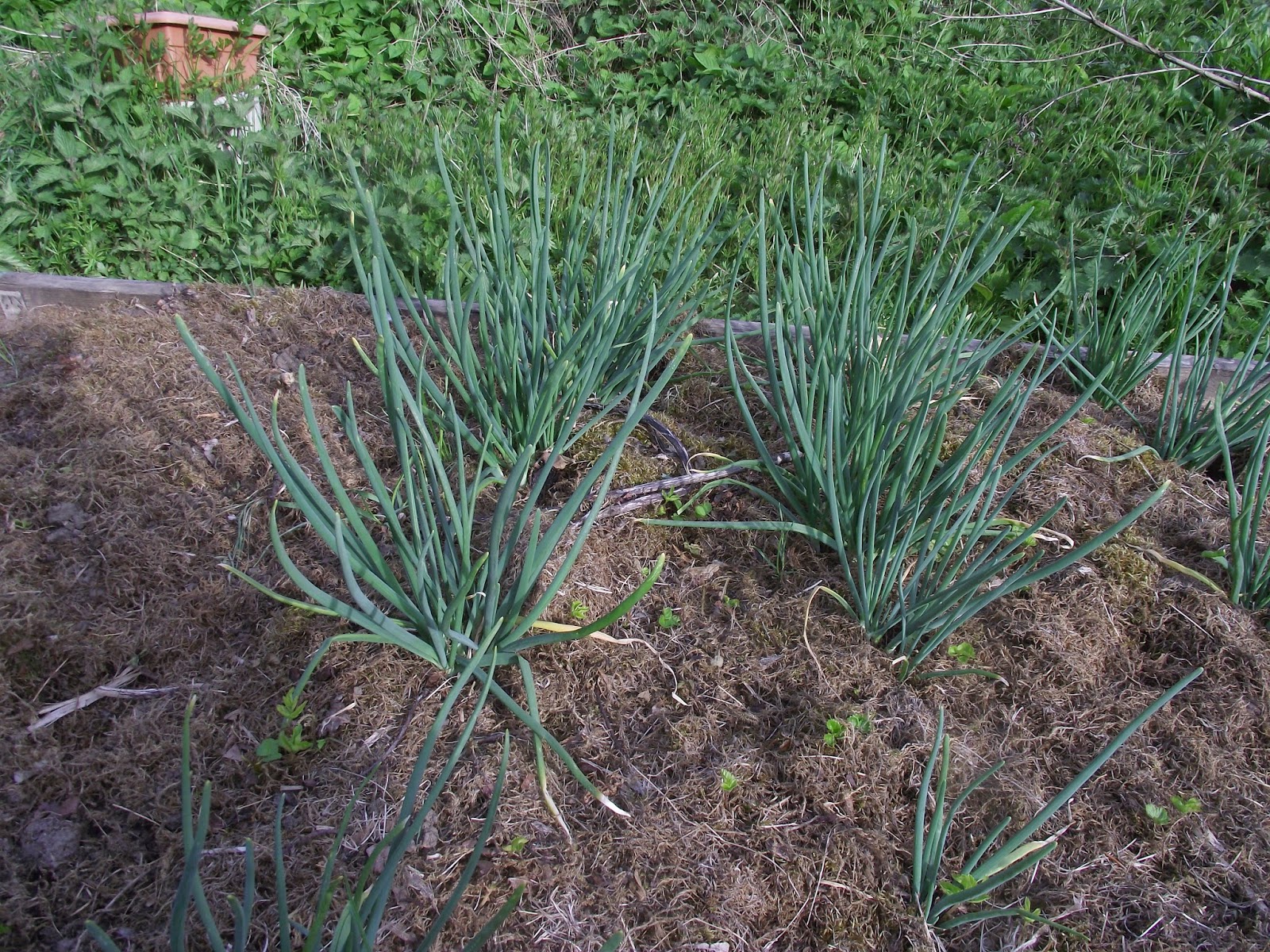 These are everlasting onions, which are similar to Welsh onions. I have the latter coming from seed. The big difference is that these rarely flower. I was sent a flower head, but the seeds haven't germinated. Neither forms a bulb. They haven't really got going yet, but they multiplied like mad last summer. They should provide green onions over the summer, but they get a bit battered and miserable over winter, and Minogue and Guinea Garden should be better then. 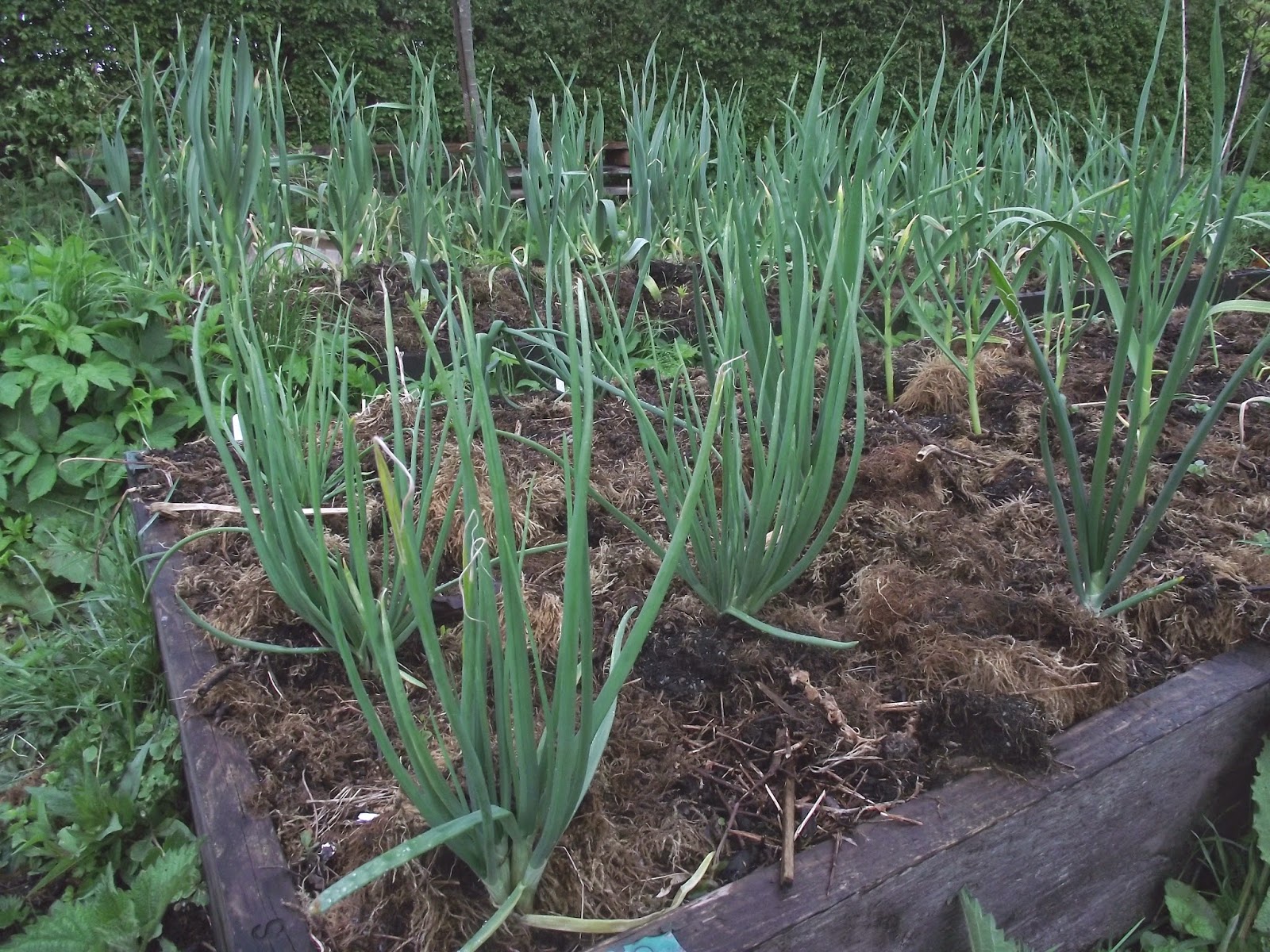 I've been interested in potato onions for a couple of years. The familiar shallot, as the gardener knows it, is a common type, and I'm not entirely clear what the difference between these and other potato onions is. It may be that they're milder tasting. The 'shallots' you buy in a supermarket are usually small onions. I could never grow them before I started putting in raised beds, but the problem seems to have been down to waterlogging.

Onions come from seed, either directly, or via sets. These are planted late in the year, and form a small bulb which is grown on the following year to produce the onion. On;y certain varieties will do this; most will just go to seed and flower. They're biennials, flowering in the second year. Shallotts, on the other hand, are grown from a bulb. You plant one, and harvest half a dozen or so next summer. They don't often flower, though I had buds form last year. Like an idiot, I did the traditional thing and pulled them off instead of getting seed. I seriously wonder whethre the difference between onions and shallots is any more than breeding,

Shallots and potato onions are smaller than onions, possibly because the method of propagation enables viruses to build up over the generations. It seems that seed-grown examples reach normal onion size, possibly because the viruses aren't passed down via the seed. Kelly Winterton in the States has done some interesting work (his booklet here), and I've acquired some seed which is descended from his Green Mountain variety. It's about three inches high at the moment.

I didn't have much luck with my bulbs over the winter. I planted two varieties of shallot at the beginning of winter, a couple of months later than usual. This was purely because I didn't have the space ready for them. I don't know whether they got damp in storage or what, but most of them succumbed to a bacterial rot. Never mind, some have survived. Red potato onions were hammered by pigeons over winter; my topsetting onions got the same treatment, but they survived better. Previous experience with Catawissa, the biggest variety, suggest that they're almost indestructible. Only one of the potato onions came through. Yellow and white potato onions were planted later, didn't come up till March, and had no problems. By the end of the season I should have a bit more idea what some of these plants turn into!

I noticed today that one of the Everlasting Onion seeds has finally germinated. It's been well over a month, but better late than never! I've added a pic of potato onions above.

Posted by Robert Brenchley at 23:14 3 comments: