The weather's continued to be cold and miserable, with not much going on on the plot. I bought 30 strawberries from http://www.blackmoor.co.uk/index.php , ten each of three varieties; Honeoye, which is early, Elsanta, midseason, and Symphony, which is late. I've gained another 12 via a swop for a couple of year-old Hellebore seedlings. I'm going to grow them on in pots, plant them out later in the year, and I should have a well-established bed by next year. The ones I inherited with the plot were no good due, presumably, to virus, and it took me a while to realise that, so i got discouraged and gave up for a few years.

Apart from that, I've planted two trays of leeks from Realseeds at http://www.vidaverde.co.uk/ , Jaune de Poitou and Bleu de Solaise, and six packets of Victorian pansies from http://www.plantsofdistinction.co.uk/ . At least, they're supposed to be Victorian, but the varieties aren't dated, unlike their old sweet pea collection, and I notice one is an F1! The sweet peas are finally emerging, despite the weather they've had to endure. They're all sitting in the mini=greenhouses, and there they can stay for a while.

Meanwhile, the fruit buds are swelling, and it's only a matter of time before spring arrives properly. I've been telling myself that for weeks. I dread to think what it wold be like sitting on the ground with my bare bum, so I'm certainly not contemplating any outdoor planting for the moment!
Posted by Robert Brenchley at 23:01 No comments:

I've had an uneventful weekend, out at an all-day church meeting on Saturday, and hedge chopping Sunday afternoon. Only a few yards of it left, fortunately. I'm getting very tired of picking thorns out of my hands every week. The chilies and aubergines are up, on the windowsill, but I'm not even thinking of doing any planting down on the plot till the soil has had a chance to warm up a bit. I might put some in a cold frame next week, but that's the most I'll consider right now. 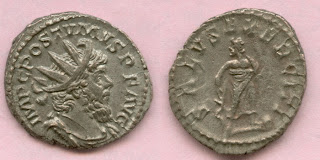 Meanwhile, here's a nice rare Postumus which came my way last week, after several days' worrying when it went missing between the parcels office and the Post Office. The reverse, SALVS EXERCITI, means 'the Safety of the Army', and shows Aesculapius, god of healing and medicine. Postumus ruled the breakaway Gallic Empire from 260-69, when he was murdered by rioting soldiers.

I noticed today that the SPCK bookshop in town is closing. When I came to Birmingham there were two decent Christian bookshops, then St. Paul's closed, and now this, which only leaves evangelical places which won't have anything of interest to me. There are a lot of empty shops in town again, like it was around 1990. It's the ever-increasing rents that do it, a lot of things have become uneconomical and been squeezed out. It's particularly obvious in the markets, which have been going downhill for many years.

I managed to pick up a Victoria plum to replace one I lost in the drought two summers ago. It had been grown on a single stem, and was ten feet high, which is ridiculous. I chopped it straight down to about five feet in the car park, and took all the side branches off. I'll rub off everything except three or four branches right at the top, then grow it as a half-standard.
Posted by Robert Brenchley at 09:27 No comments: