I'm feeling a bit better, and today I actually managed to go shopping in town, get back with a load of fruit from the market, and then get to the allotment for a couple of hours. That's a great improvement! My wife's off sick with a whiplash injury after a car crash, and it hasn't been easy with us both unwell.

I've split Hive 2 vertically, preparatory to raising more queens. Hive 5 still has a lot of the old drones, but hopefully they'll be on the way out. Hive 4 has got rid of its drones in the bad weather, but more will be along, and Hive 2 has plenty. Non-native bees tend to get rid of theirs around now, but given reasonable weather, native colonies should have them into October, if not later. It is, of course, a waste of time raising queens if there's nothing for them to mate with.

The peas are starting to produce, but with the pigeon damage, I'll be using them to produce seed rather than eating the crop, such as it is. Salmon-Flowered is the only one with plenty of pods, and as it's rare, I'll keep them for seed swaps.
Posted by Robert Brenchley at 22:50 No comments:

We had our site show today. Unfortunately I had a bad attack of migraine yesterday, in the middle of organising it. It was a complete nightmare getting it sorted, and I had to leave most of the practical stuff today to other people. Still, the show was a success, and we got 15 entrants this year, two up on last year. Unfortunately I was so shattered I didn't get any pics. I only had three entries in, and probably missed a first for my garlic because I was feeling so awful last night I didn't get the presentation sorted properly. The question now is, how can I do it better next year?
Posted by Robert Brenchley at 22:24 No comments: 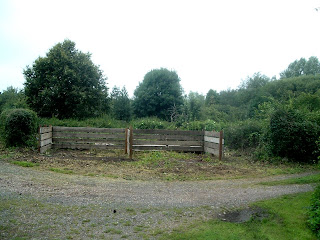 I've had some wretched stomach bug, so I haven't managed to do too much. Last weekend I just about got through a work party, building a couple of bins for dead leaves and grass cuttings. We haven't been getting so many this year, so I wonder how full they'll ever be! you can se how they ended up, anyway.
Meanwhile, my Cambridge Gage is well laden with fruit. 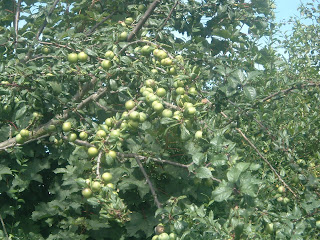 The bees have not been in a good mood, and for the moment I'm going to have to stop my usual careless habit of inspecting them in flimsy trousers. I'm not at all thrilled with the new queen in Hive 2, as the bees are decidedly jumpy. However, she's not destined for a long life. Once I have more queen cells, I'll probably slip one into the broodnest and try a forced supersedure. This is a way of conning the ees into replacing a queen you don't want, without too much disturbance. Mostly, it works, and if it doesn't, it's usually safest to assume that the bees know something you don't.
However, everything is going more or less to plan. I'm going to be raising more queens in a couple of weeks, and by the time they're ready to mate, the old drones should hopefully have disappeared, and I should end up with nice docile hives once more, after the new queens mate with drones of my own strain.
Posted by Robert Brenchley at 22:57 No comments:

I've been through Hive 5, and checked that the top box has neither eggs nor queen cells. The bottom box has eggs, so the new queen's there and laying. I broke down all the drone cells I could see.

Behaviour is a bit better, they weren't making the same determined attempts to sting. Stinging depends of pheromones given off by the queen, so if you change the queen, you change stinging behaviour. However, they were still jumping - flying off the combs at me - and following, buzzing around me. these are intimidating, and often lead to stinging. They're programmed into the individual worker's genes, so they'll last as long as this generation of bees. Hopefully that'll be the end of it, but I have three queens which will have mated with drones from this hive, so I can't be sure. I'll be getting rid of those queens next year; I can use them to produce drones or honey, but I can't raise good queens from them.
Posted by Robert Brenchley at 19:51 2 comments:

I went through Hive 1 this afternoon, to break down any queen cells in the top box (I found three) and check the bottom box with the new queen was OK. It wasn't. It had queen cells and no eggs or uncapped larvae. I can only suppose that the queen flew up when I opened the hive last week, as young queens occasionally do, and got lost. I don't want her misbegotten daughters, so I broke down all the cells, and gave them a frame from Hive 4 with lots of eggs in it. If they really are queenless, they'll raise a new one from that.
Posted by Robert Brenchley at 21:47 No comments:

After sitting for several days in a new position, Hive 5 finally emptied itself of the great majority of its original inhabitants, with all the older bees (the ones that sting) being in the box with the new queen, in the original position. I was able at last to go through them without getting stung, and the queen has been duly squashed. The only thing was, I was expecting to find a light coloured queen, with a red mark. What I found was a dark-coloured queen, with no mark. As I half expected, they've superseded, that is, they've raised a new queen, and got rid of the old. Given the number of bees I found in the top box, I suspect that swarmed as well. However, the deed is done, and the two halves have been reunited, without any of the tantrums I used to get with the old queen.

I now have four hives, all headed by queens of my own strain. The only thing is, three of them will be mismated with drones from other strains, largely those from the biggest hive, the bad-tempered one. I definitely don't want their daughters in my hives! I also have the two spare hives. So I need to wait for this generation of drones to die off, and start another round of queen raising. That way I should be able to go into winter with several queens which will, hopefully, be properly mated and able to provide daughters to carry on the strain.
Posted by Robert Brenchley at 19:33 No comments: