My migraines have gone at last, and hopefully I can keep posting once again. I checked my beehives over the weekend, and one, the nasty-tempered one with the hybrid queen, is very light. This probably means it's producing too much brood for the time of year; yet another reason to get rid of that damn queen. I've given it some sugar syrup. It's not recommended at this time of year, but I've done it before with good results.

Many of the snowdrops are out, and the broad beans (Aquadulce Claudia) I planted last October are growing well at last. Most of the garlic is now up. I don't know why everything I put in last autumn has been so slow to emerge.

I saw a fox this afternoon, in the next plot. I used to see them often, but a few years ago there was a major outbreak of mange, and they've been a rare sight since. There was a buzzard over the site a couple of weeks ago; it's now our commonest bird of prey, and can turn up anywhere, but it's the first I've seen over the city.

The weather's been a bit drier this week, and I actually managed a little digging, but in general I haven't missed much; even if I had been well, it's mostly been impossible. We'll see whether it's going to last.
Posted by Robert Brenchley at 22:25 No comments:

I've been getting the worst migraine I've had in years over the holiday, and between that and the weather, not much has been happening on the allotment. I've planted three species of Paeony; suffruticosa, mlokosewitchii and veitchii, and a Hellebore, bocconei, none of which can be expected to emerge before Sprng 2009. I'm relatively confident about the Paonies, anyway; Hellebores need very fresh seed so I'm less confident. Then there's a sarracenia mix, which should be up this year if it's going to germinate at all, and two Tricyrtis, macropoda and hirta. I managed ot germinate both last year, but then lost all the seedlings in a brief cold snap. Then there's Cyclamen pupurescens. All these need stratification, or cold treatment, so they've gone out in a cold frame where they can sit as long as they like.

I've treated the bees with oxalic acid solution (3.75%, with sugar added, trickled over the occupied seams); I checked yesterday, and small numbers of mites were falling out as ordered. Infestation seems very low, which is what's wanted, as it seems to confirm that my dtrain is partially resistent.

Apart from that, not much happening. Here's a rare Victorinus, ruler of the breakaway Gallic Empire from 268 till 270, when he was murdered by one of the many army officers he'd cuckolded. The obverse gives his full name; IMP C M PIAVVONIVS VICTORINVS PF AVG, which the reverse, FIDES MILITVM celebrates his relationship with the army which put him in power. 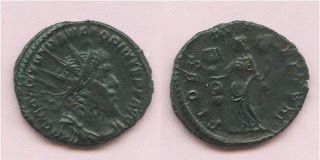 Posted by Robert Brenchley at 02:34 No comments: