I haven't been posting much, mainly because it's been such a horrible depressing season. The latest is that my climbing beans were held back so much by waterlogging that most of them flowered too late for the beans to ripen, and they've rotted. So I've got very few to plant next year. The only one which did reasonably well was Kew Blue, which I'll be growing masses of next summer.

I've built and filled a raised bed, and planted two rows of saffron and two of garlic in it. Saffron used to be grown commercially on quite a large scale in Britain (hence Saffron Walden), so it should do well. Like most crocuses, it doesn't like waterlogging, so it had to wait till the bed was finished. This has taken ages thanks to a bad attack of flu. So it's gone in very late, and I'm not expecting any saffron this year, but I should get some in twelve months or so.

However depressing the season's been, there's nothing like a bonfire to cheer you up! 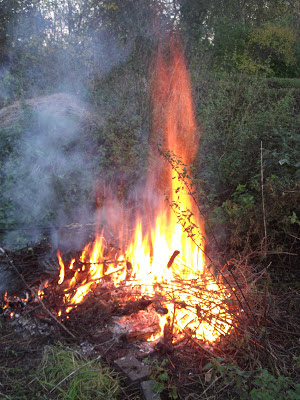 Posted by Robert Brenchley at 22:00 No comments: