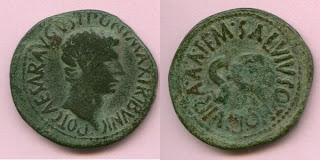 I went to the allotment today, collected some onions, looked at the frozen soil, and came home.
Never mind, here's one of my favourite coins. A moneyer's ass of Augustus, the first emperor. At 30mm and 9.73g, it's quite large and impressive. The ass was a fairly low value coin; two made a dupondius, which would buy a loaf of bread. A loaf, of course, was a glorified roll, big enough to provide a meal for one. It's called a 'moneyer's ass' because of the reverse inscription; M SALVIVS OTHO III VIR AAA FF SC. The letter 'U', of course, hadn't been invented, and 'V' did double duty. The big SC stands for 'Senatus consulto', 'By permission of the Senate', as that body was still technically responsible for the copper coinage. III VIR AAA FF means, more of less, 'Three Men for Gold, Silver and Copper'; these being the three officials responsible for the mint. it was an annual appointment, and apparently M Salvius Otho had the job in 7bc.

The obverse shows what is probably a thoroughly unlifelike portrait of Augustus, who was 56 at the time, with the inscription CAESAR AVGVST PONT MAX TRIBVNIC POT. This gives his two vital offices. The Pontifex Maximus, or High Priest (the title is still used by the Pope) controlled the religious system in Rome. He couldn't actually be a Tribune himself, as the office was restricted to Plebeians, and he was a Patrician, but Tribunicia Potestas, the power of a Tribune, gave him three things. His person was sacrosanct, or in other words, to harm him incurred the death penalty. He had the power to impose the death penalty. Above all, he had the power of veto, and could annul any law. This gave him effective control of the Senate. He allowed the appearance of power to remain with others, while jealously keeping the reality to himself.
Posted by Robert Brenchley at 20:48 No comments: 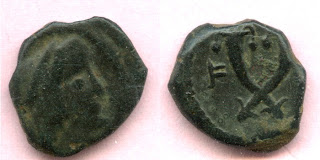 This is another Nabataean curiosity; a lead coin of Obodas III (30-9BC). Most of his bronze was issued at the end of his reign, and is associated with his minister, Syllaeus. The first coin is a bronze, 14mm diameter, and has Syllaeus' initial, in Nabataean script (a form of Aramaic) to the left of the crossed cornucopiae on the reverse. The obverse, a bit 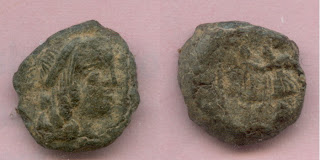 fuzzy because it was struck with a worn die, is Obodas' portrait.

The second coin is lead, 12mm, with a rather similar portrait of Obodas. The reverse is Nike (the Greek equivalent of Victory on Roman coins), with wings outstretched, holding out a wreath. Lead coins are well known from the region, but this is the latest one I've come across. Nobody knows why they were struck.

Posted by Robert Brenchley at 22:53 No comments: 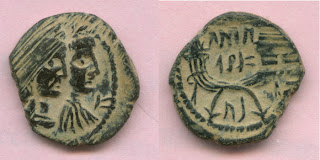 Between the weather and other commitments, I haven't managed much on the allotment the last three weeks or so. I have done a little digging, but that's all. The last three Saturdays have been interrupted by the need for a new fridge, after the last one finally gave up the ghost. We found a nice one reduced in Curry's in town, and arranged for it to be delivered two Saturdays ago. I waited in, and they eventually arrived, smelling of drink. They were unable either to deliver it, due to the lack of a stair climber to get it up to the flat, or to explain the lack of the equipment; they'd been told about the stairs when I ordered it. So I made a complaint. Last Saturday, it finally arrived after another wait, brought by two guys who carried it up unaided by fancy equipment.

Here's a nice Nabataean coin that arrived during the week. It was a locally powerful kingdom in what's now southern Jordan, with its capital at Petra. The coin is of Aretas IV, its most influential ruler, and his wife Shaquilath. Aretas ruled from 9BC to 40AD, when the kingdom gained its wealth from trading frankincense to its Roman masters. They managed to keep the source of the incense secret, and thus became vital middlemen. Because the men spent so much time trading, the women became more influential, so they appear on the coins over a century or so. Aretas married his daughter to Herod Antipas, one of the sons of the original King Herod, who was Tetrarch of Galilee and Peraea, a small area on the East Bank. When Antipas divorced her in order to marry Herodias, Aretas was so upset that he went to war, and Antipas was trounced. Later, he, or his representatived in Damascus, tried to have the ever-tactless St. Paul killed. The coin is 19mm across, quite thick, and weighs 3.82g, making it noticeably larger and more impressive than the average scrotty little Levantine bronze.
Posted by Robert Brenchley at 18:19 No comments: