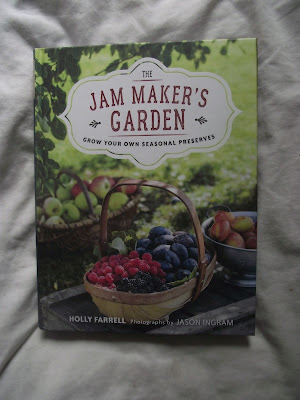 I needed something like this book. My jam-making skills are almost non-existent, and so much fruit goes to waste. I have currants which I could rescue from what’s now a mass of nettles; my girls always turned their noses up at them so I left them. They’ve both left home now. Gooseberries never did much for me, but they might well do better in a raised bed away from the waterlogging. Raspberries and strawberries do better, but I need to grow a lot if they’re going to leave the allotment without being eaten first. Then there are all the blackberries in my hedge, and along the canal. I’ve never got any further than making crumble.
There’s basic advice on growing, with specifics on each fruit, but the main emphasis is on preserving, as it ought to be. It doesn’t confine itself to jam, but covers the entire range of techniques. I never knew the difference between a chutney and a relish before, but they’re both in there. Sterilising jars is made nice and easy; I always imagined it would be complicated, but evidently it isn’t. I vaguely remember some old accounts of jam making which made it seem a forbidding process, but evidently they made it unnecessarily difficult. Apparently it’s not necessary to sterilise the jar after it’s been in the oven, so it can be used when it’s cool enough to handle, which probably explains it.
There’s nothing about sterilising plastic, and I have a lot of old peanut butter jars with plastic lids; bleach or disinfectant would probably do it, followed by hot water and soap. Or maybe the other way round, or will they stand boiling water? Some experimentation seems necessary.
There are a lot of interesting recipes. Windfall marmalade, for instance, which uses apples, jumps out at me because of the numerous apple trees on my allotment site. Bramble jam is another obvious one, and greengage jam if I can face stoning all those fruit. They all come ripe at once on my Cambridge Gage; if I’m not on the plot at the right moment and the wind blows, I can lose the lot to slugs. Chewed ones would go nicely in jam.
Some of the recipes are unexpected; chili jam for instance. We use a lot of it in cooking (my wife’s West African), but I’d never thought of using it in anything as sweet as jam. Sweet chili dipping sauce looks good, and probably similar to some of the milder chili sauces we use. I’m growing masses this year, mainly milder varieties; they came via seed swaps, and these are what British people seem to go for in the main. Most of the hotter ones I planted didn’t come up, but I’ll try again next year.
I can see I’ll be using this one every summer for the foreseeable future!

The Jam Maker's Garden is published by Frances Lincoln at £17.99.
Posted by Robert Brenchley at 00:10 No comments: 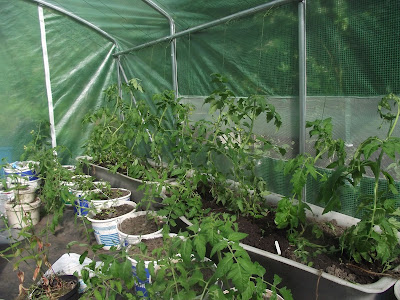 I've just strung up most of my indeterminate tomatoes. these are the ones which go on growing indefinitely; you take off the branches and let the main stem rip. The ones in the buckets are the determinates; they grow so far then stop, so you leave the branches on for a bigger crop. They flop all over the place whatever I do, so I'm inclined to let them sprawl. 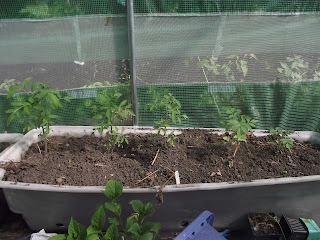 These diddy little things were badly damaged when  frost got into the tunnel despite the door being shut at the end of April. Black Seaman on the left; it's a good variety so hopefully it'll catch up. He-man on the right; it's a grafting variety I want seed from, and one ripe truss will do for this year. I don't suppose it's that much for eating, but I may want to graft potatoes onto tom rootstocks to force them to produce berries. The theory is that without producing tubers, all the plant's energy goes into reproduction. 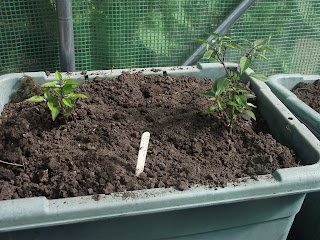 These miserable things are my biggest chili plants. They've been really slow, but once again, if I just get a few ripe peppers that'll give me seed at least. 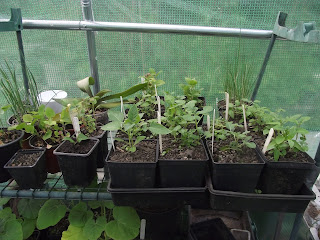 Most of my seedling potatoes are coming along slowly. I'll be putting the biggest outside in buckets soon.
Posted by Robert Brenchley at 13:41 No comments: