The Gardeners' Companion to Medicinal Plants

I haven't posted here for ages; I was ill all summer due to some meds which poisoned me, on top of losing an eye thanks to a blocked vein. So altogether it was a difficult year. But the allotment is getting sorted at last, and meanwhile here's a book review I did the other week. 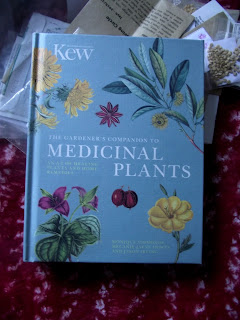 THE GARDENERS' COMPANION TO MEDICINAL PLANTS: AN A-Z OF HEALING PLANTS AND HOME REMEDIES


I like this book; it’s not intended as a medicinal guide, but it has brief notes on 277 medicinal plants, covering a wider range than anything else I have, and they can easily be researched further if necessary. Most plants are given half a page, though some have more space; the books list the parts of the plant used medicinally, the traditional uses, and any relevant modern medical discoveries. There are instructions for making 25 remedies, which could easily be adapted. So, for instance, there’s a recipe for comfrey ointment; substitute another herb, and follow the same method.

None of my other books mentions chili, which we use at home. In Sierra Leone, where my wife comes from, it’s used in pepper soup, made from vegetables, bits of meat or fish, and lots of fresh chili; dried chili can be used if necessary. This is given to people with minor illnesses, and served at parties. According to the book, the leaves are used to cure toothache, while the fruit is used for gastric disorders, chronic laryngitis, chilblains and rheumatism, and it’s given to women suffering pain in childbirth.

Rose Hip Syrup is a familiar one from my childhood. It was generally available in the 1950’s, due to the prevalence of dietary deficiencies before the Welfare State and the NHS came in in 1948. It looks simple to make, and once again, the method could easily be adapted. Valerian is another; I sometimes take the tablets to help me sleep, as I refuse to use addictive benzodiazepines like Valium. I’ve never tried growing it, yet, but the instructions for drying the root look very simple. The book warns that it causes drowsiness, which is undoubtedly true; it was also used as a poison in an episode of ‘Midsomer Murders’, but I’ve looked, and can’t find any major health warnings anywhere. I’d go a bit careful on the dose though!

Onions aren’t mentioned, but there’s a recipe for garlic oxymel, made with honey and vinegar, which would make it taste a lot better. It’s best taken raw for medicinal purposes, and I know several people who use it against colds and flu. I’d be tempted to add an onion myself, as it has comparable effects.
Overall, this is a book I’ll be keeping.
Posted by Robert Brenchley at 16:59 1 comment: