I've been neglecting this blog badly, thanks to the endless winter, and sickness. It's high time I got back to it! 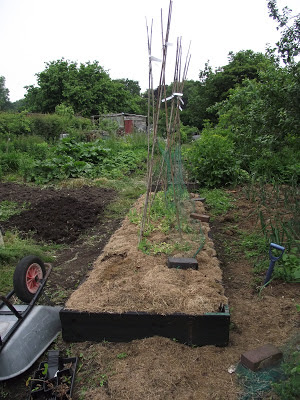 I've got three raised beds filled and planted now. The latest, in the foreground, has rare peas which I'm growing out for seed. Several are umbellates I got from the States; I'm really excited about these. They're probably all or mostly British varieties, since our peas were popular over there in Victorian times, but they've disappeared on this side of the Atlantic. They all have to be netted against pigeons, first when they're small and the shoots are accessible, and then when the peas start swelling. 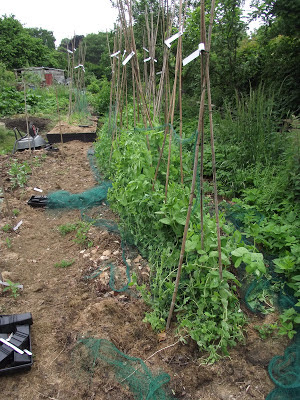 .
These are peas I planted earlier. The nets should really have come off before now, but I haven't been well, and it's been a real struggle. 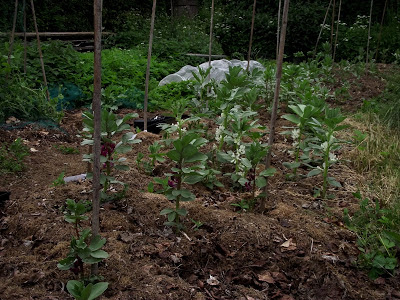 Many of the broad beans are flowering at last; I can't believe I planted these in March. I've planted nine varieties; Crimson Flowered Bean in the foreground, with the all white Oldambster Weirboon from Holland just behind. Those two look far more interesting than the conventional varieties, which have white flowers with a black spot. They didn't all germinate well, and the slugs got a few, hence the gaps.

Everything's growing fast now, and it looks like a good year for the top fruit. Several of my trees need thinning, but that will have to wait till the autumn. I don't want to summer prune them, as that weakens the plant and slows  its growth. Winter pruning will result in good growth next year, hopefully where I want it. I've thinned the crop a bit on the Bramley's, partly because I don't want all the vertical branches bent down by the weight of the apples, and partly because it's developed biennial bearing, and I want fruit every year, rather than a glut one year and nothing the next!

Posted by Robert Brenchley at 21:15 No comments: