I've let myself in for it now; I've taken on the job of Newsletter Editor for the local Beekeepers' Association.

I had a look at the hives the other day; it was more like April than February. Hive 6 is dead. I was wondering last time. When I think back, they didn't really bring in any honey last autumn, while Hive 4 was storing masses. They slowly windled away over the winter. that's often indicative of hybridisation with unsuitable imports. People bring in queens from southern Europe or other warmer climates; they don't fly or mate in poor weather, and they don't cope with cold winters. I don't understand the attraction.

Hive 4 is flourishing. The queen evidently stopped laying during the cold snap last week, and has now started again. They were bringing in masses of hazel pollen, and actually have some stored. I've never seen bees storing pollen in February before.

My wife has just bought a video camera, and I made my first ever video, of the allotment. It's very short, but I included some shots of the bees as well as snowdrops and hellebores. You can see it at http://www.youtube.com/watch?v=YbI6XqPUShQ .
Posted by Robert Brenchley at 13:25 1 comment:

I managed a little digging today, but really wasn't feeling up to much. I made my first ever video, and didn't even realise I was recording sound until I played it back. Snowdrops, hellebores and hazel catkins on the allotment, and a very active bee colony.

Another chilly and miserable day. I had a splitting headache all night - a symptom of my chronic fatigue syndrome - and felt bad enough to cancel what I'd planned to do on the plot. I did get down briefly though.

Some Sarracenias arrived this morning from Blackkitty2. I've grown them before, when I was in Cornwall, and was keen to try again. So I had to get them potted up. I've just put them in 4-inch pots for the moment; they'll be OK for the moment, but once they start growing they need to sit in a saucer of water or something similar. So I need to concoct something that won't need daily topping up.

They're fascinating things; the leaves form tubes like upright trumpets, and trap insects which drown in the water at the bottom. The plant absorbs the juices as they rot. The ones I had before were about eighteen inches high, and fed on midges and the like.

Of course, the ultimate would be something like the orchid in the H G Wells short story:
http://www.readbookonline.net/readOnLine/9381/

While I was down there I met my new neighbours on the neglected plot next door. They seem keen; I hope they make a go of it this time!
Posted by Robert Brenchley at 16:23 No comments:

Goodlife has just sent me seed of two varieties, Paula and Skansk Margart (I don't know how to do umlauts and that little o the Scandinavians put over vowels, so that'll have to do!), from one of the Scandinavian seed banks (http://www.nordgen.org/index.php/en/content/view/full/62/). Paula has small round seeds, and Skansk Margart is green and wrinkled. That's really all I know about these so far. I'm looking forward to growing them out and learning more.
Posted by Robert Brenchley at 12:10 No comments: 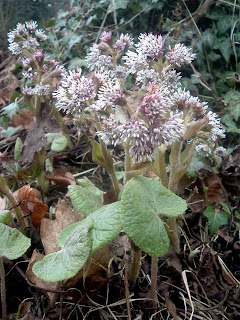 This is a small butterbur (Petasitses) about eight inches high, which grows in the lane on the way down to the allotments. There's a much bigger version in the woods, and I'm not sure which, if either, is 'proper' butterbur.

The snowdrops are in full bloom, and I'm busy planting a long row of autumn raspberries. These are the popular ones on the site; I don't know the variety, but lots of people have them. They're easier to manage than the summer raspberries; you just cut everything down in the autumn, and they fruit on the new canes the following year. Crocuses are out; I'm not a fan, and haven't planted anything except a few species crocus.

Hive 4 was busy today, bringing in masses of hazel pollen. I had a look at them; they're starting to raise brood - I find most strains stop in very cold weather - and have patches of eggs and young brood on two frames. Hive 6 has bees in a couple seams, and no brood that I could see. The sun had gone in, the light was bad, and I could easily have missed something. They're looking weak, so I hope they get going!
Posted by Robert Brenchley at 17:43 4 comments: 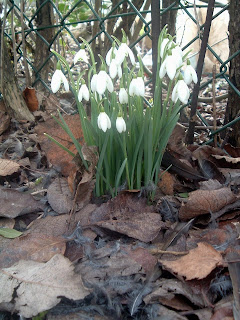 The first snowdrops are out, and there's no more hard frost forecast. I've planted sixty Aquadulce Claudia, in pots. I's a pretty indestructible variety, though I've given up trying to overwinter it due to waterlogging, which does kill it. If the worst comes to the worst, I have more. Come April, I've got Red Epicure and Crimson-Flowered Broad Bean to go in, but they're not so hardy, and I don't want them flowering at the same time. I can cope with two varieties at opposite ends of the plot, as they're unlikely to cross-pollinate, but I'm not sure about three.

Someone in the States has sent me eleven named varieties of couve tronchuda. It's a rare old Portugese cabbage, which is apparently loose-leaved, somewhere between a modern cabbage and a kale. A couple of places used to stock generic seed, but it's now disappeared, So I asked around, and that's what I ended up with. I've now got more rare brassicas than I know what to do with; the seed is in the freezer as it'll take several years to grow it all out. I can probably manage two varieties a year if I net them on alternate days while they're flowering so they don't cross. The hedges round my plot do a lot to isolate it from the rest. I'm scrounging unusable net curtains from the church charity shop, which gets inundated with stuff that's fit for nothing but the rag man.

There's a short clip here about couve tronchuda, from the BBC series 'The Victorian Kitchen Garden'