When I was a kid I found this growing along the Wye in Herefordshire (http://apps.rhs.org.uk/advicesearch/Profile.aspx?pid=480), and got really frustrated as being an introduction it wasn't in my wild flower book. It's only since I got the allotment that I've realised what a dreadful weed it is; it spreads like mad in damp ground.

The one good thing is that the seeds are short-lived. It either comes up the following spring or not at all. I've been trying to exterminate up on the railway embankment above the site. There's definitely less than last year, but still far too much. A good frost would have exterminated it once it was up, but we didn't get one, and it doesn't look too likely at the moment. A dry summer could do it, as the embankment is far from being a good habitat for it. Otherwise, I'll be grubbing about again pulling out every one I can find, and this year I'll bag them so they can't set seed as they lie dying.
Posted by Robert Brenchley at 23:24 5 comments:

The daffodils were flowering all round the site while I was off-line, but they're fading a bit now. These are some of the peas I'm growing this year; you can see the variation in colour. 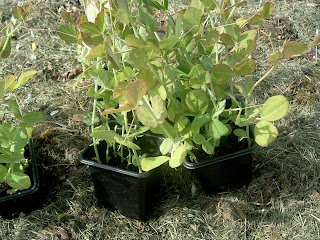 Salmon-Flowered Pea. The reddish tinge is due to anthocyanin, and it's controlled, firstly, by a gene enabling the plant to produce it. Many peas lack this gene altogether. Then more genes are needed, each one controlling its expression in a specific part of the plant. So more peas have the first gene, but we don't see the red pigment because they lack the genes enabling its expression. 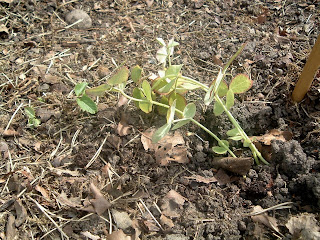 Purple-Flowered Russian. This one has red borders to the leaves. 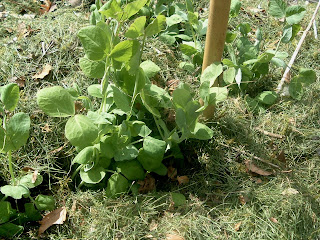 Robinson's Purple Podded. Like many old peas, it lacks a 'proper' name, but this one comes from Robinson's Seeds. The red pigment appears in the flowers and the pods, but is lacking in the leaves. 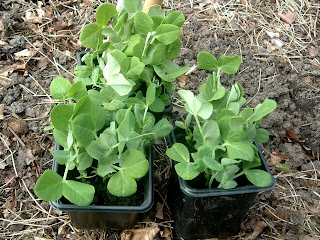 Hatif d'Annonay, 'Early Annonay'. This is a short pea; the growth habit is far more compact than the others, due to a much shorter internodal length, from one leaf to the next along the stem. 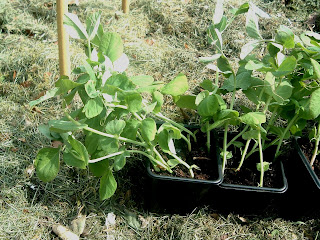 Carruther's Purple Podded. Saved by the family of a Patrick Carruthers, hence the name. Again, no red to be seen. 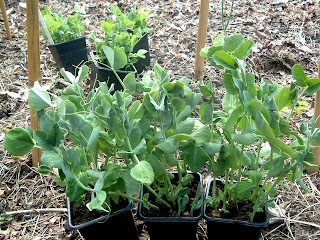 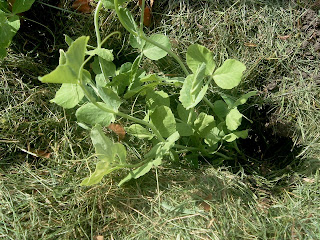 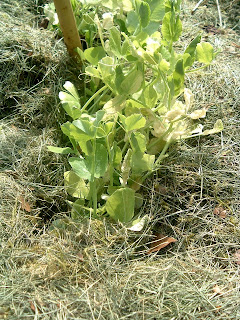 Serpette Guilotteau; a 'guilotteau' is apparently an old French type of pruning knife, which the sickle-shaped pods are supposed to resemble. In the second pic you can see that the lower leaves are losing their colour and dying off. I've seen this in seedling peas shortly after planting out before, and I imagine it's due to stress. the growing tips look quite healthy, and I imagine they'll soon recover.

Meanwhile, we have a rabbit on the site. I saw prints in the snow; they come up the railway line or the canal in snowy weather. It's still around, and raiding roots. It's been at my Chinese artichokes and tuberous peas repeatedly, and now it's started on the oca and the spuds.
Posted by Robert Brenchley at 21:35 1 comment:

I've been unable to post due to Sky messing us about again. It all started at the beginning of February, when the phone bill mysteriously appeared on their account. We tried them for a month last year, found they were more expensive than BT, and that the salesman hadn't been exactly honest with us, and went back to BT. Then Sky slammed the line - ie tranferred it without authorisation. We complained, and found our letters being ignored, so we went to OFCOM.

As soon as we complained, they started messing us about over the TV channels. They cut off most of them on the pretext that we won't give them a Direct Debit. We've now complained to Trading Standards about this. In the end, they gave the phone back to BT, but they're still demanding payment for the phone for the couple of months or so they had it. We're not paying, as they had no contract, and have no right to enforce payment. So they cut off the broadband, whic has now gone to BT. All in all, it's the worst experience I've ever had with a utility. Not recommended!
Posted by Robert Brenchley at 08:12 1 comment: