Teeth on the loose

Something's been going round the site chomping broad bean pods. The toothmarks are quite regular, and considerably larger than a rat's. Maybe a rabbit? 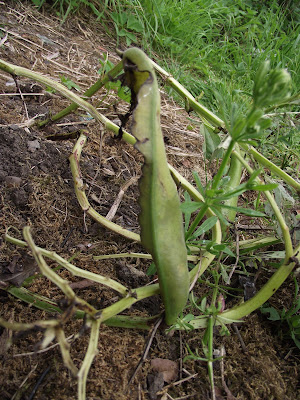 And something - probably the same something - has bitten through most of the stems on this wigwam of Kew Blue French beans. Hopefully they'll grow back, but they'll be set back by several weeks, and they're late enough to start with. I deliberately planted them in a weedy spot; they'll tower over the ground elder, and I can dig that out properly over the winter.﻿ 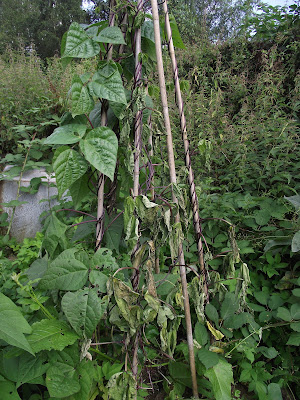 Rosebay willowherb. It's nice and cheerful, as long as it isn't on my plot! It's a weed of damp places and bare soil, but that pretty much describes the site.
﻿ 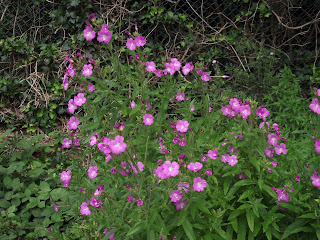 Posted by Robert Brenchley at 19:46 2 comments:

I had a look at my swarm hive today. I've been feeding in a frame of foundation - sheets of  embossed beeswax which the bees pull out into comb - once a week. So every week, I've been taking out a frame, with brood and honey. I've been putting that into a spare broodbox sitting on top of the hive; the brood hatches, the bees move down to join the rest, and the honey eventually gets moved down. It's a method I use every year, and I've never had a hitch. This time, I pulled a frame out of the top box, glanced at it, and there was the queen in the middle. She's supposed to be in the bottom box, busily laying away. So I started cursing myself for moving her up by accident, put her down below, and then statrted thinking. Of course, I'd followed my normal practice, and knocked all the bees off the frame before I moved it up. It's a sensible precaution, since it's so easy to miss a queen.

So I had a close look. In the top box, I found eggs, and one-day-old larvae. In the bottom box, I found two-day-old larvae, but nothing younger, plus capped queen cells. Eggs take three days to hatch, so the queen must have moved up about four days ago. Last time I opened that hive was seven days ago. She must have forced her way through the queen excluder, probably attracted by the smell of the brood in the top box.

It's not impossible; I've seen it before. Some years ago, I was smoking a hive, when I saw a kestrel drop into the next plot, a few yards away behind the hedge. I watched for it, and after a couple of minutes, it rose with a small mammal in its talons. Only then did I realise that I was still puffing away on the smoker. The bees must have been half suffocated. I found the queen, a great fat thing, crawling about on top of the excluder. There were eggs below, and no eggs or brood above. I could only conclude that I'd driven her through myself.

A one-day-old worker larva can be converted into a queen successfully, as the diference is nothing more than an extra sugary and nutritious diet. Older larvae can be converted, but don't make good queens. the cell is capped five days after hatching, so a cell capped after four days can produce a perfectly good queen. Or it might not. the queen was only two boxes away, so those bees will have been getting at least a little of the queen pheromone which, among other things, suppresses queen raising. Under those circumstances, they're unlikely to raise a bad queen.

I've still got lots of drones - no good making queens if there's nothing for them to mate with - so I moved the bottom box across onto another stand, put the top box where it had been, with a couple of extra frames of honey and pollen, and put everything back together. The old queen has some brood on about three frames, stores, and the flying bees. She should soon lay up a decent sized broodnest. The second box has the brood, queen cells and young bees. A new queen should hatch in a week or so - it takes fifteen days from laying - and mate. I may have to feed them, but they're good bees which have been bringing in pollen and honey all through the vile weather, so perhaps not.
Posted by Robert Brenchley at 01:13 2 comments: