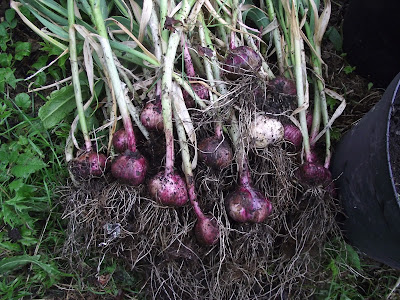 I lifted the rest of my garlic today, since it was dying back. It's very early yet, so there are no garlic scapes this year, but it did the same last year. This is also supermarket garlic, but a few generations removed. I used the best I had from two very waterlogged years, and planted it in a raised bed last year. As you can see, I've ended up mostly with the purple variety, but I've still got the odd decent sized bulb of the white one, so at least I haven't lost it altogether. There are some nice bulbs in there, despite the early harvest.

As always, I lost a few due to white rot. I've always managed to keep it to a minimum by rotating, but I'm going to try boiling up a few bulbs to make a garlic infusion, and water it onto beds which show signs of the disease. I've never tried it, but the theory is that it stimulates the fungal spores to germinate, and they then die as there's no onion or garlic there. The other alternative would be Armatillox, a coal tar derivative which is sold as a garden cleanser. It's lethal to fungi, and probably a lot of other things as well, and I'm not keen.
Posted by Robert Brenchley at 22:59 2 comments: 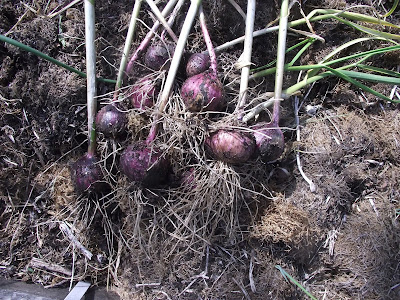 This is garlic from the local market, which I planted in the depths of last winter; I can't remember quite when. It came up with no problems, but it was dying back already, and as you see, it hasn't cloved at all. I'll plant it in the autumn and see what it turns into. I planted some solo garlic I was sent last spring; last time I checked, it had roots and no shoots. It never emerged. I trust this is going to do a bit better! 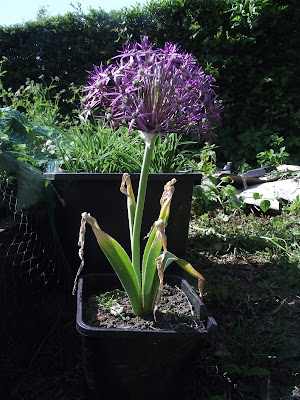 I found this nice allium in a pile of grass cuttings and rescued it. You can tell it's suffered a bit.
Posted by Robert Brenchley at 15:49 No comments: