It's now drizzling steadily, which is something I suppose, though the ground's still very dry and we need a real downpour to make much difference. I nipped down to the plot earlier, to check the bees before it started.

I now have half a dozen tiny Meconopsis seedlings; I've falied to get seed of this to germinate many times, but the trick seems to be very fresh seed, and stratification over winter. the Daubenton's Kale is growing well. The name seems to be a generic one for any non-flowering perennial kale; we've now identified three varieties. There's the variegated one I have, a green one, and Taunton Deane, named after the garden in Devon where it's been preserved.

The big hive - No. 4 - is flourishing. I'm slipping a frame or two of foundation in every week, and easing out the remaining standard National frames. When I swapped to 14x12's, I let the bees build comb out on the bottoms of the frames rather than starting with all foundation, and it's worked well. It's time for them to go, however. The broodbox is packed with bees, though there's nothing going on in the supers yet. There's no sign of swarm cells so far, which is good. I don't like swarmy bees. They gave me a bit of a stinging last week, but this time they were fine.

The swarm - No. 5 - now has brood on three frames. I found the queen, and marked her white; it's last year's colour, but she's highly unlikely to have been raised this year. They're pulling comb steadily, and they sit very quietly during examinations.
Posted by Robert Brenchley at 12:33 No comments:

I had a look at both colonies this afternoon. The swarm is happily settled in, has stored some honey, and has a couple of frames of eggs. So that's looking good. They seem to have stopped buzzing me as well. The original colony (Hive No. 4) is still building up fast. They're moving up into the supers, where the honey crop's stored. They got a bit agitated while I was inspecting them, buzzing around my head. Not a good habit. Unfortunately, not many beekeepers make much effort to breed from the best queens, so you really are taking pot luck with swarms. I've had far worse! Both hives have been given a couple of frames of foundation to pull out into comb. It should do something to discourage Hive 4 from swarming, and it'll enable me to get rid of some of my nastier old comb.

I've also planted out some more peas; Victorian Purple Podded, Glory of Devon, and Lancashire Lad.
Posted by Robert Brenchley at 18:11 No comments:

The May is out

And the clouts are well and truly cast. 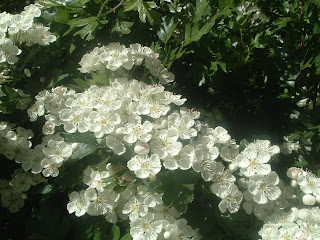 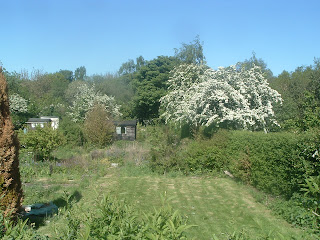 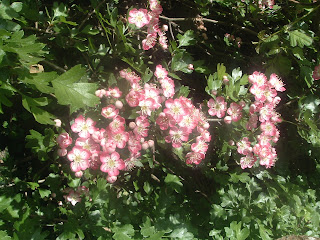 This last one is (I think) Midland Thorn; it has smaller leaves, and as you see, pink flowers. 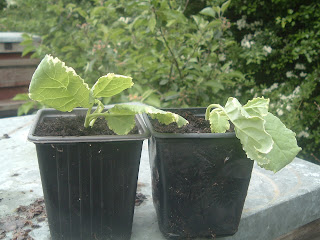 Goodlife sent me a couple of small cuttings of Daubenton's Kale. It's perennial, and, as you see, propagated by cuttings. It rarely sets seed, though it does happen. There are a few perennial brassicas; the only well-known one is Nine-Star Perennial Broccoli, which I'm also growing.  I also have 'Spis Bladene' (which isn't its proper name; we don't know what it is) from the HSL. They say it 'appears to be a perennial kale', suggesting they don't really know themselves. It obviously sets seed, but I believe some of them flower, and then sprout from the base instead of dying. It'll be interesting to see!

On Thursday morning, I passed by the plot, to see dozens of bees flying around two empty hives. There had been a few around for just over a week, and this usually turns out to be the precursor of a swarm, as they stake their new home out in advance, and defend it against other bees. Sure enough, when I returned after lunch, they'd made their choice, and there was a swarm in residence, having frightened a couple of neighbours on the way in. Swarming bees don't sting, but they can certainly look impressive! Unfortunately they have a habit of buzzing round my head. This is a known undesirable habit ('following'), so I'm going to be requeening them. It's hereditary, and I don't want all my bees doing it.
Posted by Robert Brenchley at 18:48 3 comments: