I was tied up all day Saturday, at a Methodist gathering discussing 'Creation' all day, then I took the wife out for a Vietnamese, and we went on to a CBSO performance of Haydn's Nelson Mass and Strauss' A Hero's Life. When I got back into Birmingham I got soaked on the ouskirts of a major thunderstorm, but I didn't think about it too much. Yesterday I was busy as well, but I did manage to get to the allotment briefly. It's never been so badly flooded in the ten years I've been there. Plots that usually escape were underwater, but inevitably I didn't have the camera. It's drying out now, with only the worst bits still flooded.

My plot was badly flooded as always, but yesterday it was gone apart from a couple of shallow pools. It's too early to say whether there's any long-term damage, but as long as it dries out I should be OK. There was another big thunderstorm a few miles away this afternoon, but we only got a few drops of rain.
Posted by Robert Brenchley at 18:01 No comments: 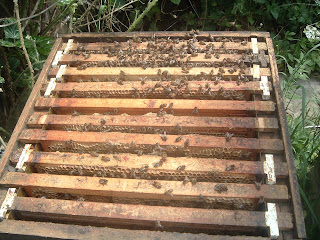 We're having torrential showers this afternoon, which are badly needed. Everywhere that isn't mulched, the soil has been getting seriously dry.
I checked the bees yesterday. Hive 1 now has nine frames of brood, and the bees have started moving up into the supers, shallow boxes of comb which the honey crop goes in. Left to themselves, they'd soon be filling the first super, but I'm going to be splitting the hive in another week or so, to raise a new queen. you can see the bees in the su 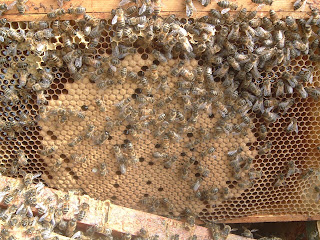 per in the first pic. the second shows a nice patch of brood in one of the frames. You can see the flat-capped worker cells, and that there are few empty cells, This indicates that there are no brood problems in the hive.
The third pic shows some nice queen cells being raised in Hive 5. 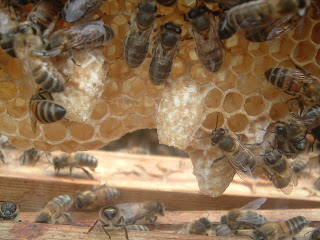 Hive 3 has two frames of eggs in the upper part, showing that the new queen has hatched, and is healthy. In another week, I'll be able to see whether she's laying worker brood, but given the weather and the number of drones I have, I'd be amazed if she hasn't mated satisfactorily. Hive 4 has brood on 7 frames, and seems to have settled down at about that number.

Apart from that, I've dug over a weedy patch, barrowed a lot of grass cuttings to mulch it, and started digging over the area I want to plant the tomatoes in. The peas had their tips nipped off by pigeons before I planted them out, but they're recovering now.
The last pic is a tulip tree flower. It's a nice little tree which grows just on the other side of the hedge. The flowers aren't conspicuous, but like many greenish flowers, the more yo 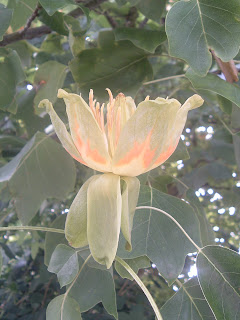 u look, the nicer they are!
Posted by Robert Brenchley at 18:16 No comments: 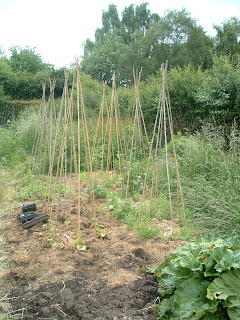 I've got the last of the peas and beans in, and dug out another weedy patch to make space for the oca. The wigwams are looking a bit bare at the moment, But here are Pea Beans, Cosse Violette, and six varieties of tall peas. The next jobs will be digging a much larger weedy patch to make some room for the tomatoes, and planting out the sweet corn. Meanwhile, I've been chopping and freezing loads of Catawissa onions for soup.

Hive 3 still hasn't laid up that frame I want to use to raise more queens, but they'll get there in the end. Meanwhile, Hive 1 is on seven frames of brood, and they're refusing to use the remaining frames which are pretty horrible. I had hoped they'd clean them up but instead they're chewing them down to the midrib, so they'll have to go ASAP. The remains of a dead cluster from last winter are being propolised rather than removed, so that's another two frames I need to get rid of. Hive 3 has six frames of brood.
Meanwhile, the government here lurches from one scandal to another, with ever more revelations about the abuses of MP's expenses - I feel sorry for the decent ones who haven't fiddled - and more rumblings over the Iraq inquiry. The latest is that Blair, the man behind so much of it, was lobbying to have it held in private, presumably in yet another attempt to avoid some well-deserved embarrassment.
Clumsy fiddling of the Iran election (they could have got away with it if they'd been cleverer, or less arrogant) seems to have finished off their hybrid Islamic/democratic state. Or apparently democratic anyway. It's either dictatorship or democracy, and it'll be interesting to see which way they go. Whatever they end up with is going to have an enormous influence on the direction of the Middle East.
Posted by Robert Brenchley at 18:01 5 comments:

I've got Catwissa onions available to swap if anyone's interested. If you don't have anything to offer I'll accept postage.
Posted by Robert Brenchley at 22:31 5 comments:

I've inspected Hive 1, now with seven frames of brood, and new bees starting to hatch out. Hive 4 has seven frames likewise - bigger frames of course - and hasn't laid up the little frame I gave them for queen rearing. So as I need newly hatched young bees to get decent queens, I've reversed the boxes on Hive 5. The broodbox which was at the bottom is now at the top with the young bees, and the queen is now in the one that was on top. I didn't get stung, which was a relief after last time, but when I took off the Snelgrove board which splits the hive in two, a vast cloud of drones I'd accidentally imprisoned in the super rose with a trememdous roar. There's no honey in it, but they'd started sealing honey in the broodbox.

The walking onions (or Catawissa onions as I really ought to call them) have started falling over. They're mainly used for green onions, so I've brought home an armful which I'm going to freeze and use later for soup. Meanwhile I'm bogged down with GCSE marking, and don't have much time for the allotment as a result.
Posted by Robert Brenchley at 20:57 No comments: 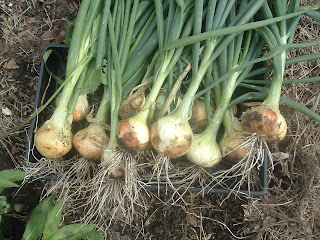 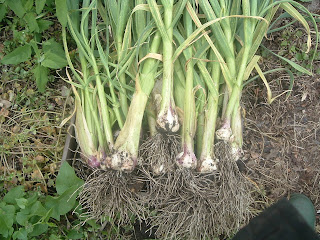 The few surviving overwintering onions were flopping over, so I lifted them to dry. I'm not sure whether it's damp or cold that gets then, probably the former. I don't have much luck with these! I noticed that a couple of my Purple Wight garlic were flopping over, rather early, but I lifted them all anyway, and realised that I got them mixed up with the Albigensian Wight when I planted them. Those were lifted far too early as a result, but never mind. I'm left wondering what sort of mix the Albigensian Wight rows will turn out to be. Three of the bulbs had advanced white rot, but it's been the same every year since I took the plot on, and it never seems to get any worse. 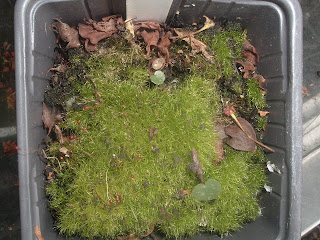 This pot of Cyclamen purpureum seed (from Chiltern Seeds) has been sitting in a cold frame since autumn 2007. It's finally produced a couple of seedlings. The bigger of the two has been up for several weeks, and I only spotted the second today. Hopefully, there may be more to come.

Posted by Robert Brenchley at 23:07 No comments:

From the minutes of the 337th meeting of the Advisory Committee on Pesticides (ACP), held on 12 May 2009:

5. Agenda Item 5: Applications for the use of ‘Forefront’ and ‘Runway’ (now known as ‘Mileway’) water in oil emulsion formulations containing 30 g/l aminopyralid and 100 g/l fluroxypyr, as an agricultural herbicide and horticultural/industrial herbicide on grassland and amenity grassland [ACP 7 (337/2009)]

5.1 Members considered the applications for the re-instatement of approvals for products containing aminopyralid.

5.2 Members agreed that the applicant had taken all reasonable steps to manage manure contaminated with residues, through the proposed stewardship campaign, training and monitoring. However, there was some concern about the practicalities of the programme which would need to be addressed and closely monitored as part of the stewardship programme.

5.3 Members noted that aminopyralid was persistent in ground water, and that further confirmation of the effect of irrigating vulnerable crops from ground water sources was required.

5.4 Members were also concerned that approval in Europe could result in UK stewardship measures being by-passed. Further information was requested from the applicant about the level of approval and stewardship requirements across the EU

5.5 Subject to satisfactory resolution of these outstanding questions, members were minded to advise Ministers to re-instate approvals.

So the stuff's on the way back unless there's enough of a protest to force a re-think. I can only suggest that manure should be avoided altogether unless you know the animals and what they've been fed on, as this is likely to become a perennial problem.
Posted by Robert Brenchley at 15:51 2 comments:

It's tipping it down with rain, so it looks like a day to concentrate on the annual nightmare of GCSE marking. I did at least manage to check the beehives yesterday, though I got no further. Hive 1 is looking good, with 6 1/2 frames of brood. I only got two queen cells in the first batch I raised, so I gave both to Hive 3. For some reason they broke one down, leaving them with a single cell. I'm not happy with that; I like to give them two or three. It should be OK though. Hive 4 is on five frames of brood, and has laid up a second frame of eggs for me. I've now given that to Hive 5, to requeen itself with. 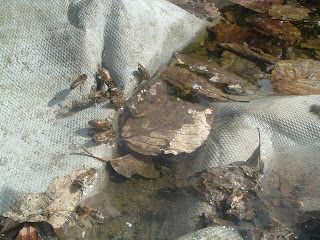 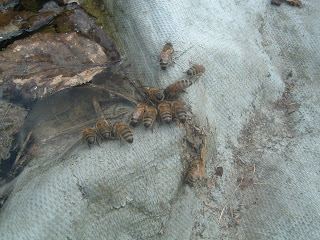 There are always a lot of bees drinking from this puddle when the sun's out. I've been keeping it topped up because I don't want them going elsewhere and scaring the neighbours. They like very shallow water in the sun, presumably because it's warmer. When I shaded the puddle one day, they abandoned it till it was back in the sun. They'll often go for very dirty water, possibly for extra mineral or organic content. 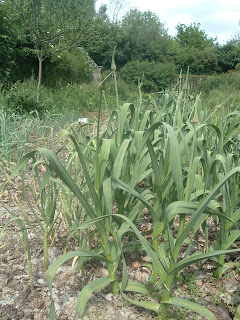 The elephant garlic is flourishing as always. The scapes need to come off in order for the bulbs to reach maximum size. 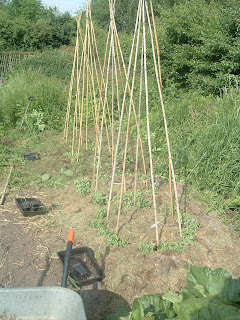 I've just planted out some of the peas. These are Salmon Flowered, Robinsons' Purple Podded (so called because it originated from Robinson's Seeds), Lancashire Lad, another purple podded variety, and Ne Plus Ultra. I had to replant Magnum Bonum and Alderman so I'll add those in a week or two. As you see, I use wigwams made of 8-foot poles, with string wound round to give the tendrils something to grip.
Posted by Robert Brenchley at 10:56 2 comments: 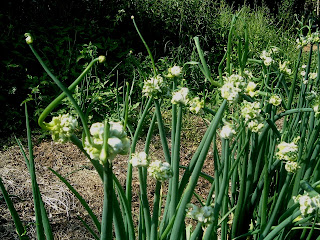 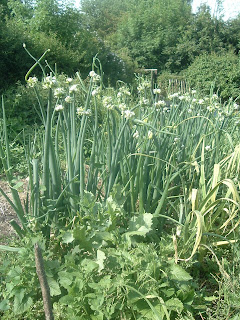 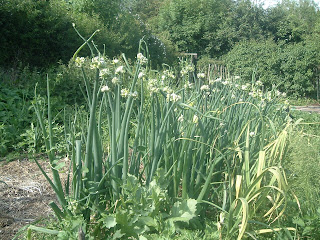 These are my walking onions. They were grown from full-sized bulbs, and are now waist-high, quite a bit bigger than last year, and dwarf the row of good-sized Purple Wight garlic next to them. I've found a US website (http://alanbishop.proboards.com/index.cgi?) which has someone who knows a bit about this stuff, so I'm hoping to find out what sort I have. Apparently there are several types.
Posted by Robert Brenchley at 22:17 8 comments: