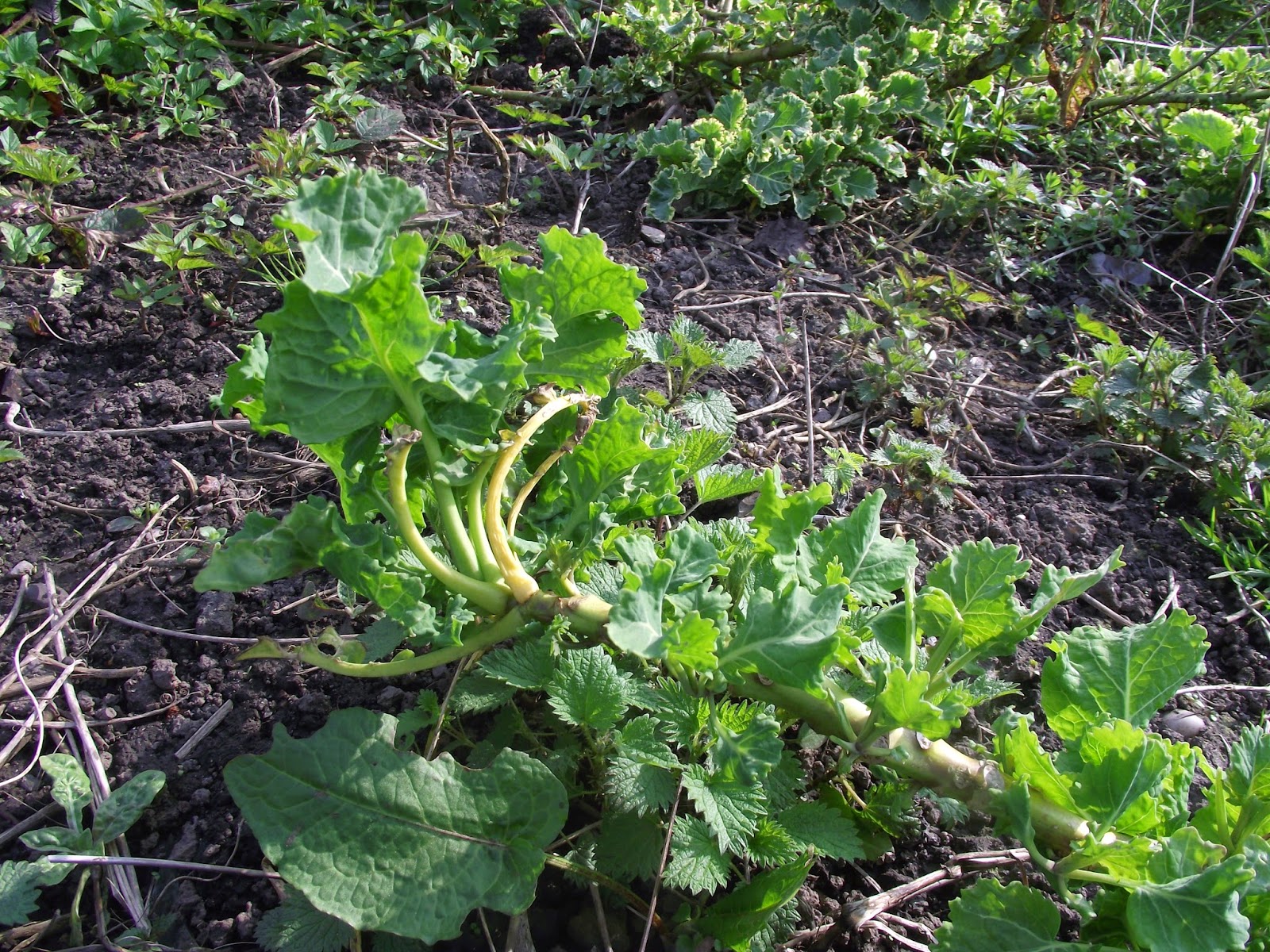 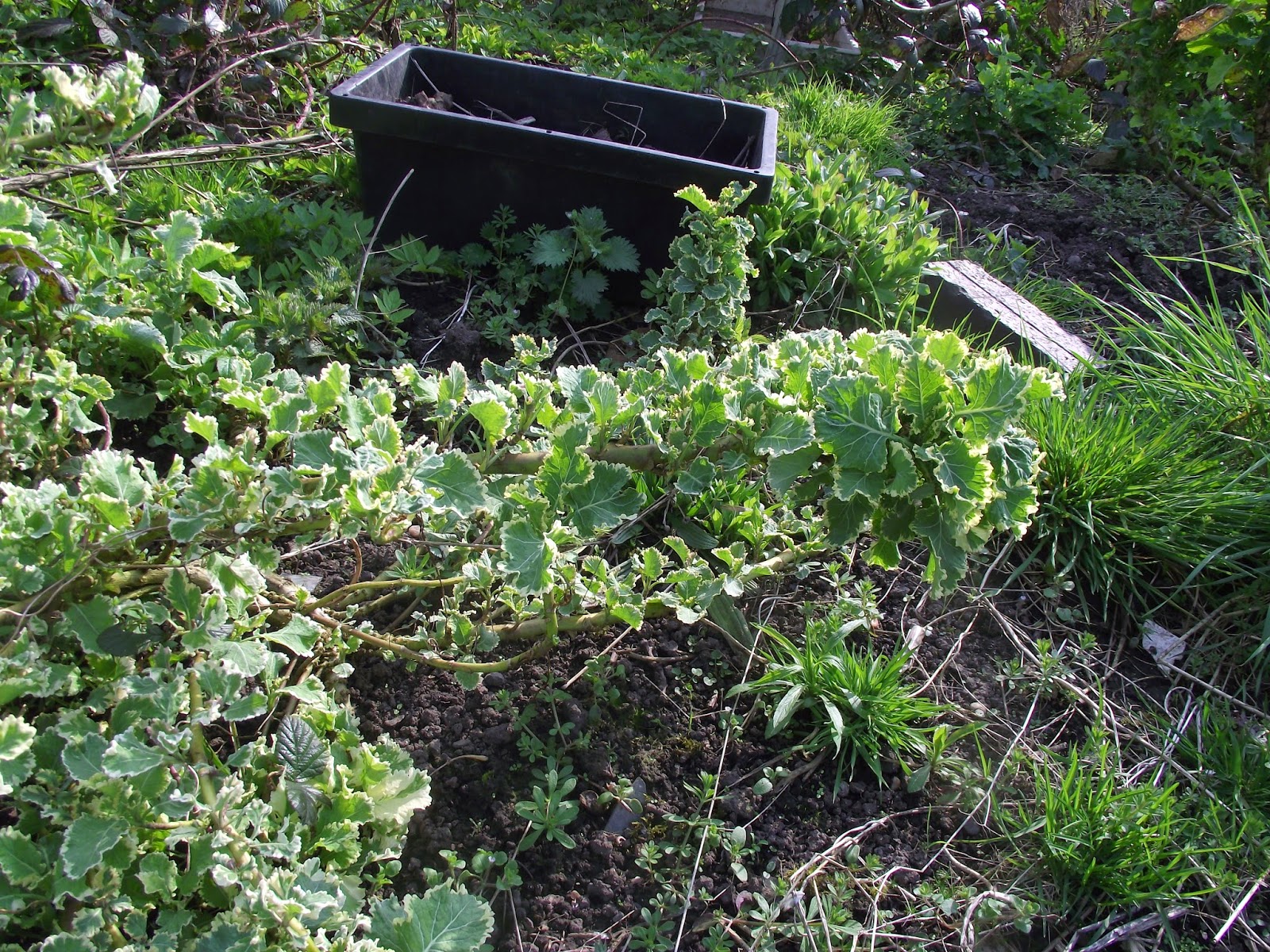 Green and variegated varieties of Daubenton's Kale, growing in a neglected patch of the allotment. The plants have been hammered by pigeons - I should have netted them earlier - and you can see the typical growth habit, with branching at every node along the stem. These are tough plants which grow where a lot of things won't, and they'll cope with the periodic waterlogging. So I've left them in level ground, on part of the plot which is still waiting for me to get round to my building raised beds there. 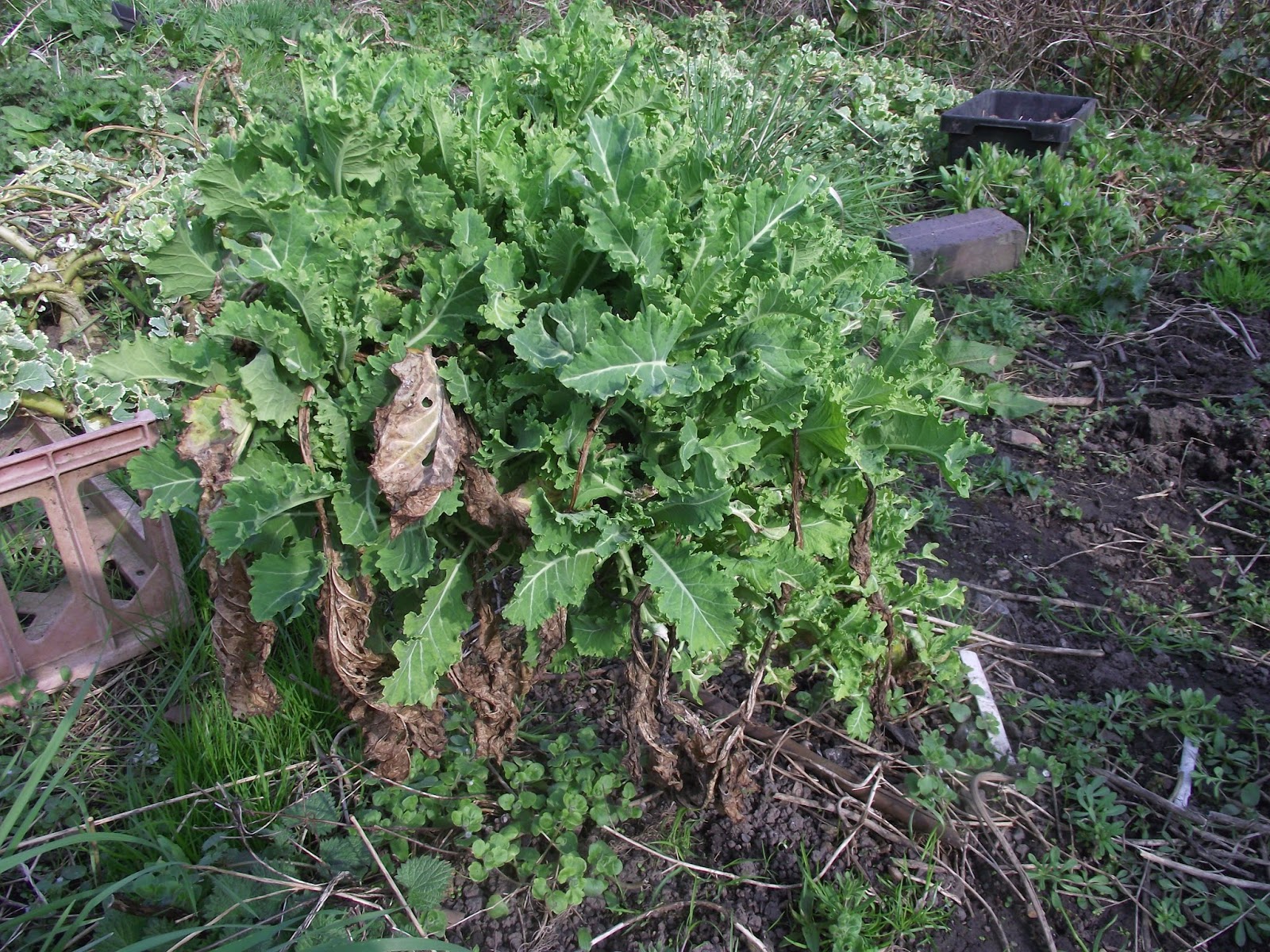 Daubenton's grown from seed from the Heritage Seed Library. It's clearly crossed with something as the leaves are more crinkly than the standard version. That's to be expected as brassicas tend not to self-pollinate. All these have sweet-tasting leaves; from the culinary angle, there's nothing to choose between them. 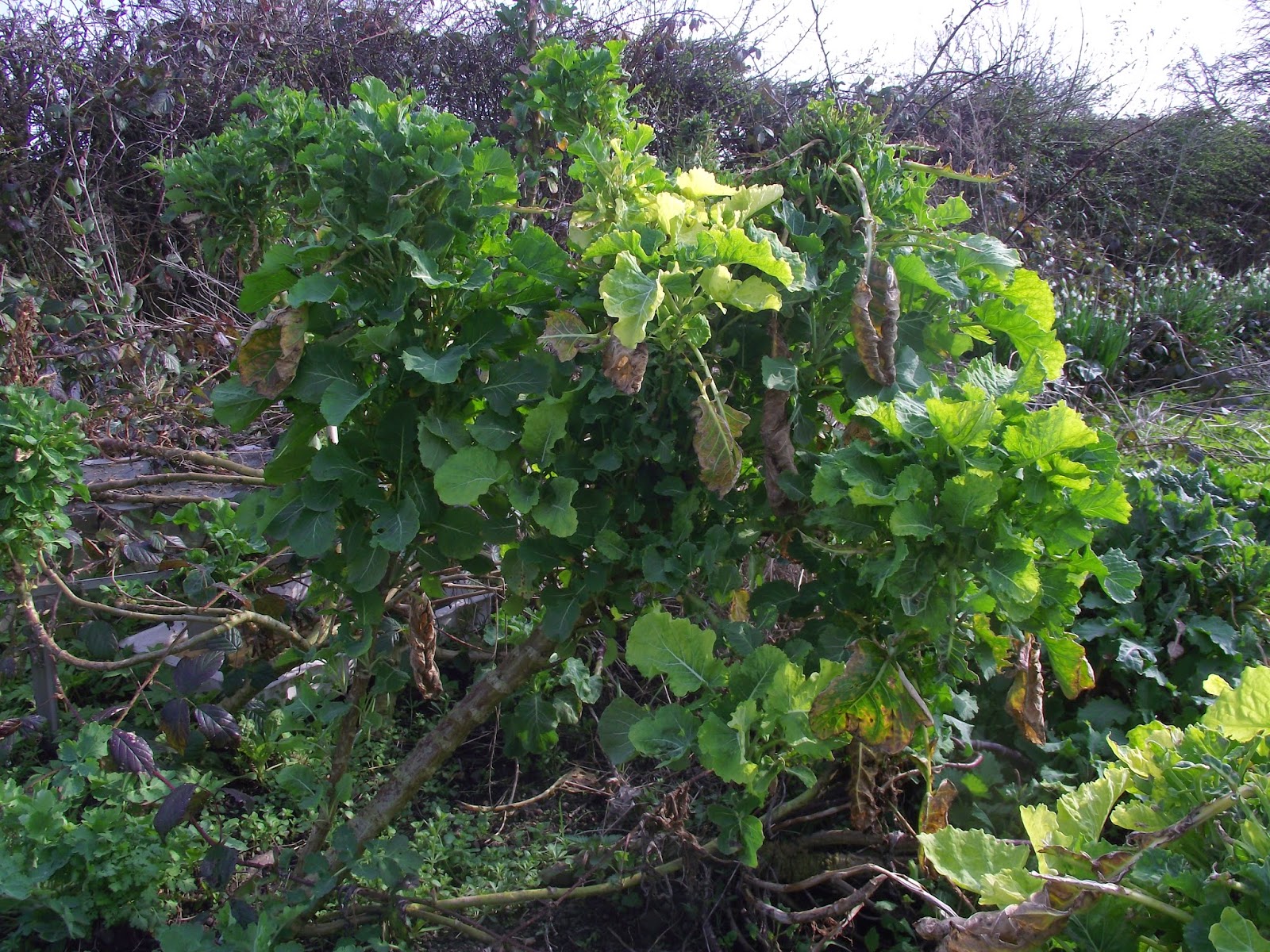 Perennial tree kale; a cross between Daubenton's and a green tree collard.  This is a triffid, about five feet high when the pigeons haven't been at it. I've got four plants from this cross, all different. The leaves are a bit tasteless, lacking the sweetness of Daubenton's, but the difference isn't really noticeable in our spicy food. It still has the Daubenton's trait of branching at every node. 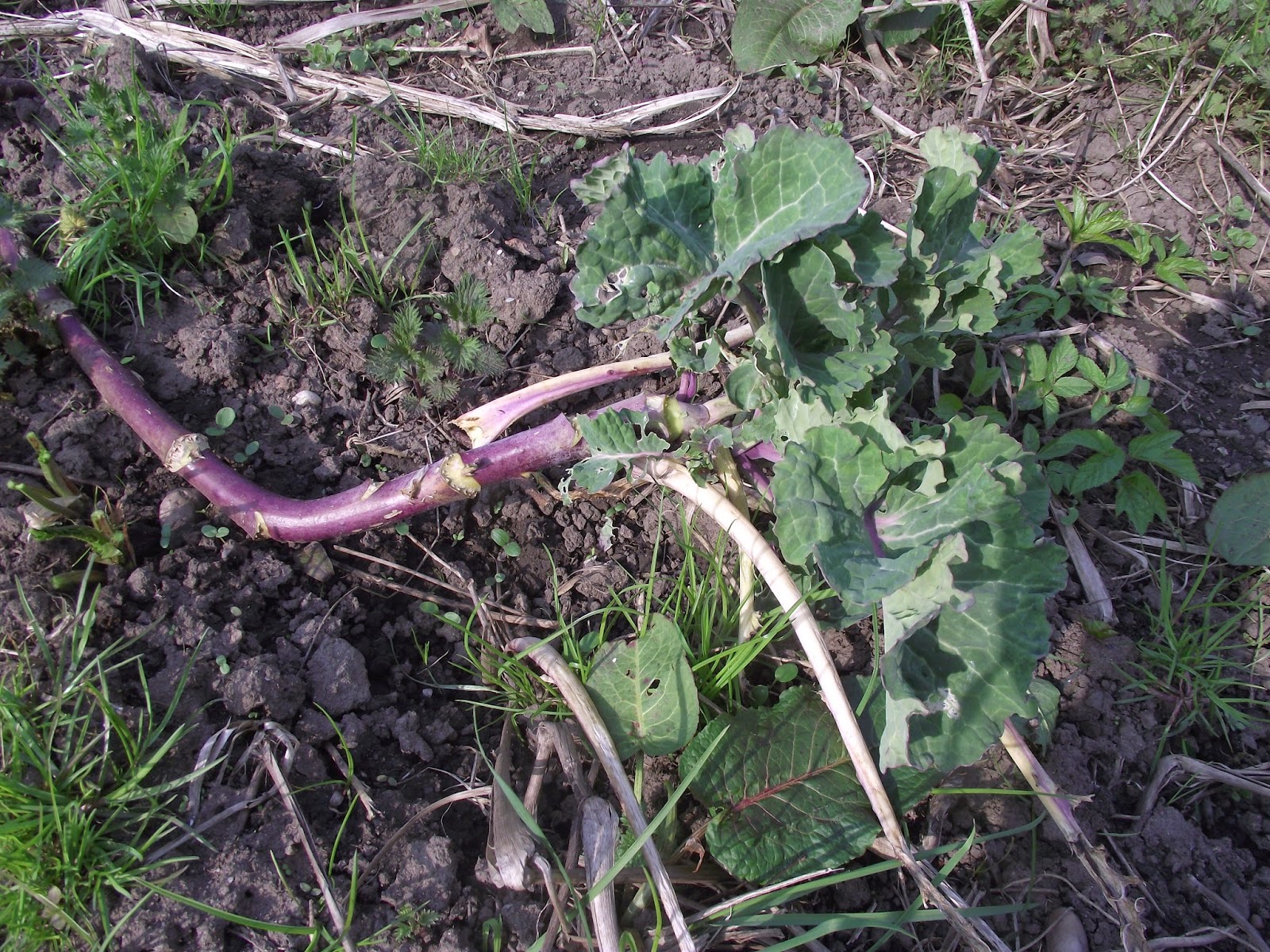 Taunton Deane Kale. These are from cuttings I was sent last year. so they're still quite small plants as these kales go. As you see, it lacks the branching habit, with leaves at the end of a long stem. Like Daubenton's, it's sweet tasting.

These are all recovering strongly from the pigeon damage, and will be very much bigger by the end of the growing season. 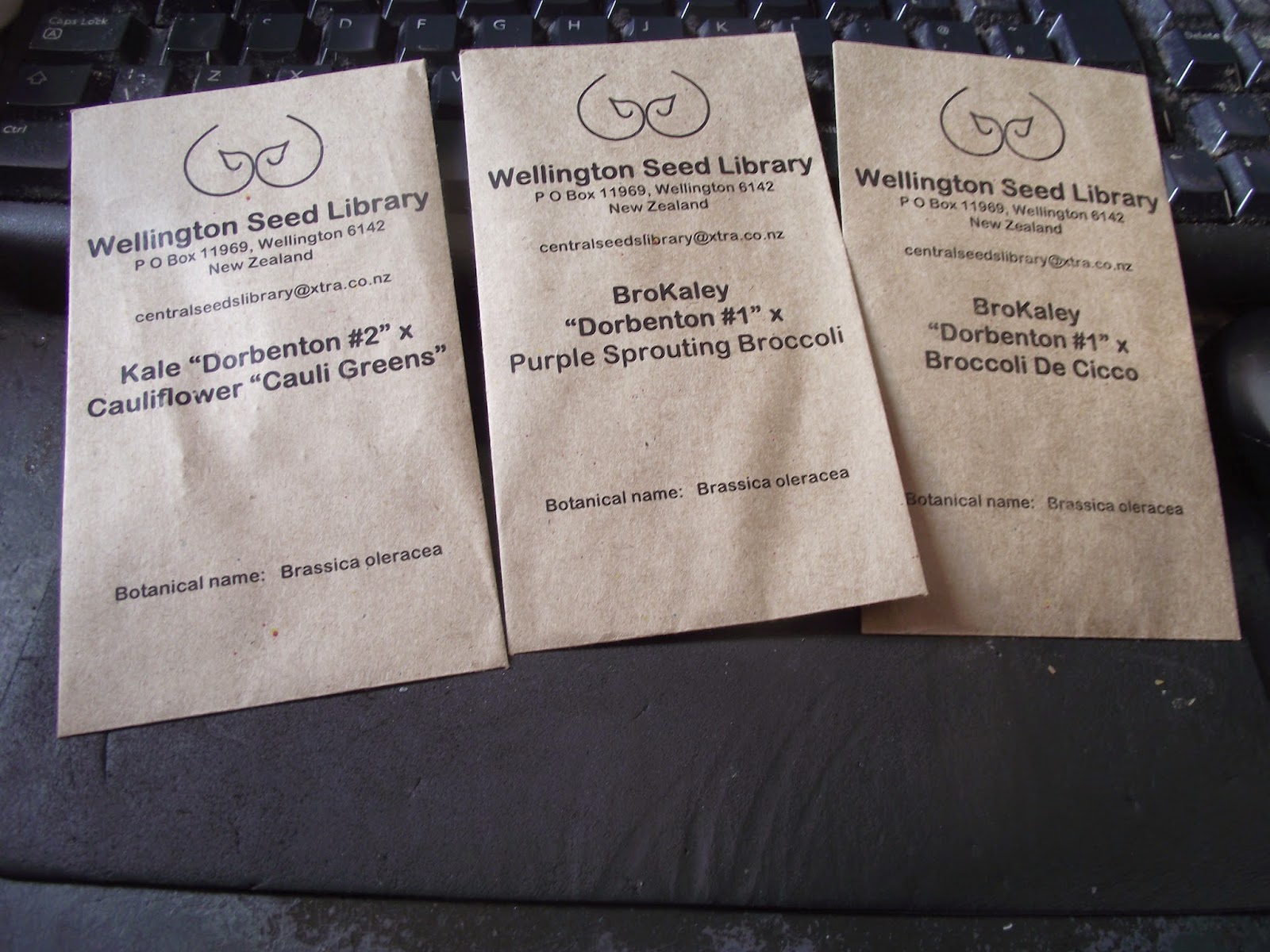 Last but not least, three interesting packets from New Zealand. Dorbenton's is apparently a weaker version of Daubenton's; I don't know whether it's a cross or a completely different variety. These are crosses with broccoli, and a cauliflower, and I can't wait to see what they turn into!
Posted by Robert Brenchley at 17:43 No comments: