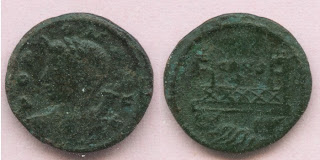 I've just discovered that today is the anniversary of the Battle of the Milvian Bridge in 312 AD, when Constantine I defeated Maxentius outside Rome; Maxentius drowned in the Tiber during the rout. This left Constantine as the master of the Western Empire, but it took another successful civil war before he controlled the whole of it. Whether you believe Constantine was a Christian or not, and I have my doubts, there's no question that the battle set the stage for the Christian takeover of the empire, and the subsequent development of the exclusive, intolerant monotheism which is so unfortunately familiar today.
Some have claimed that this rather enigmatic coin, issued in Constantinople either during Constantine's reign or that of his son, shows the bridge. There's no evidence to support this, and it's probably a generic bridge.
I've done the same with the broodless colony as the dronelayer; put a nuc, the bad-tempered one this time, in a hive where it was, then shaken all the bees out. Both colonies were in a temper, and I got three or four stings. I checked the new hive that's replaced the drone layer. the two strains are completely unrelated, but the drone laying queen made it back to the nest, and is still there. There are two distinct broodnests. I haven't seen this with unrelated queens before. I was short of time, and couldn't stop to find the queens. I left the bees to sort it out; they usually pick the right queen, and I doubt whether the drone layer, which they were already trying to replace, will last long.
Posted by Robert Brenchley at 22:49