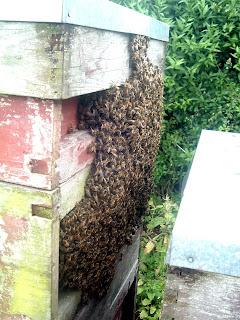 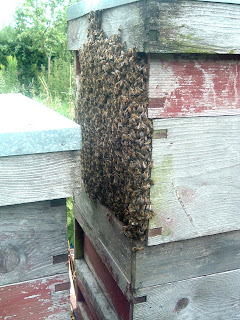 I acquired two bee swarms last week. On Monday, I had a phone call from another beekeeper, would I like one he had? Of course, I said yes. It turned out to be quite small, like most of this year's swarms, but obviously with the potential to build up in time. So that went in one of the empty hives. Then on Friday, I got to the allotment to see another, much bigger, swarm hanging on the side of the other empty hive. There's nothing extraordinary in that; they're attracted by the smell of old broodcomb, and I've had bees arrive and move in before now. So that one was soon hived as well.
They're both Italian/native hybrids, like most of the bees I come across, but they seem good tempered, which a lot of hybrid bees aren't. Both have a good sprinkling of black, native-looking bees, so they may be close enough to the original British bee to be worth keeping, despite so many having a yellow stripe.
Meanwhile the weather's warmed up a bit. Maybe we'll get a summer after all.
Posted by Robert Brenchley at 12:46