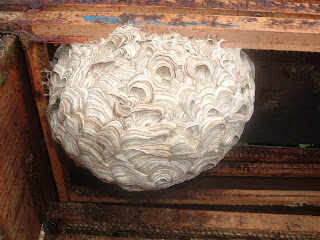 This is rapidly getting bigger. The wasps still quite unaggressive though, and ignore me while I watch them. The patterns in the paper - made from chewed wood pulp from all sorts of places - are amazing. Both hives are getting stronger; Hive 4 is laying down honey - at least ten pounds in the bottom super during the last week, a smidgeon in the one above it, and a lot more in the broodbox. Hive 5 is expanding steadily, and now has five frames of brood, and a little stored honey.

Weeds are doing better than anything else at the moment. they always seem to at this time of year, but it's far worse than usual as I couldn't keep up last year. I'm really struggling, but as long as I can keep planting things out I'll manage. The slugs hammered the French beans and the Gloire de Portugal when it rained. All the other brassicas were left unmolested, as are the runner beans. I should have some peas soon. I've had a few lettuces, and while the spinach went straight to seed, it is at least beginning to flower, so I should have plenty of seeds.

The Sarracenia flava are eating large quantities of medium-sized insects, up to and including wasps. I've been surprised how many of the latter I see staring up at me when I look down the pitchers. They're not supposed to be looking for nectar this early in the season. S rubra only eats smaller victims, and doesn't seem to get as many, unless it's simply that they're sinking out of sight, while the flavas are getting clogged up with larger prey.
Posted by Robert Brenchley at 21:37