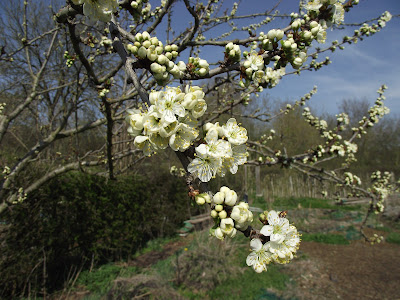 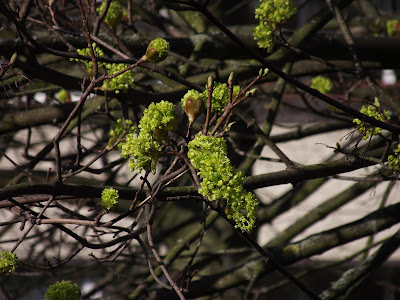 The signs of spring are all around us, like the wonders in Conan Doyle's 'Lost World'. Plum blossom is coming out, and the sycamores round the flat are in full bloom. The bees are booming, with six and a half frames of brood, and patches of capped drone brood. That's where I'd expect them to be in early May, not the end of March. 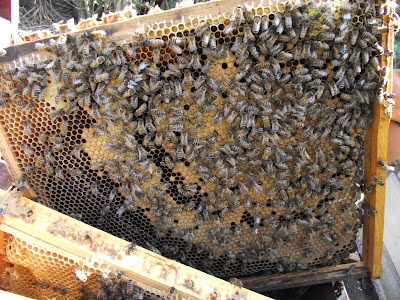 There's a noce frams of brood developing here. You can see the capped brood - the brown areas - with very few holes, and flat capping, indicating that the queen is laying fertile worker eggs, in a nice pattern. To the left, if you enlarge the pic, you can see uncapped honey, which is coming in from willow. 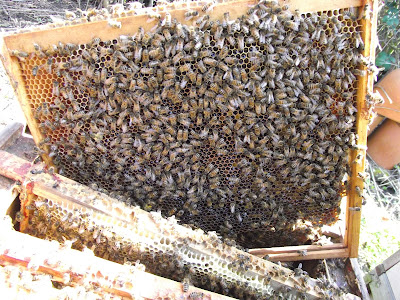 This one's mainly honey, with yellow, greenish or brownish pollen (depending what plant it comes from) in some cells.

With colonies so strong so early, we can expect swarming, especially if the current weather continues. I've heard one swarm report already, and I've seen bees around my empty hives, suggesting that a colony not far away may be making preparations. The interesting thing is that I pick up swarms every year, then those colonies don't often prepare to swarm out of my hives. You'd have thought a lot of swarms would be from swarmy strains, but it doesn't seem to work like that.

A lot of the swarms go on to fill the broodbox with brood at the height of the season, and that may be the key to some of it. There are many different factors which affect swarming, but one of them is space. If the queen runs out of cells to lay in, the colony usually swarms. I use 14x12 boxes, which are significantly bigger than a standard Nations, which uses 14x8 1/2 inch frames. I think some of those colonies run out of space because beekeepers are using boxes which are too small for them.

Posted by Robert Brenchley at 21:18