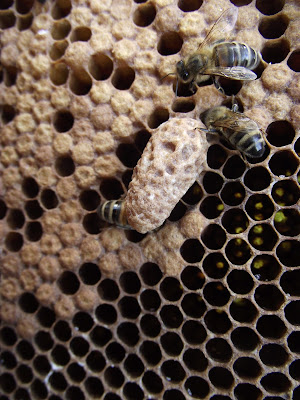 I had a bad attack of migraine last night and didn't manage to write. but I checked both hives yesterday. They're looking good. Both have plenty of worker brood, at various stages of development, eggs, and lively-looking queens. Hive 2 has two frames of brood, and Hive 6 has four. Hive two has a supersedure cell.

Swarms are sometimes headed by old queens which are past their best, and it's not too surprising that the workers are trying to replace her. However, this is a bad moment, as I have no drones. The weather has been ideal for large-scale drone assemblies to form, but from what I've seen, the vast majority of queens mate close to home. I've never had one mate successfully unless I had the drones myself. I'd be much happier if they kept the old queen. Bees usually know what they're doing, far better than beekeepers, though, so I'm leaving them to it. 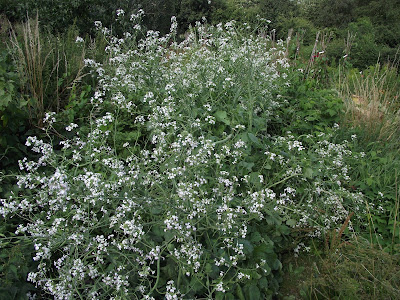 The rat-tailed radishes are now triffid-like, and sprawling all over everything. Apparently you harvest them when they're about 5mm thick. They're nice and peppery, but are going to be fiddly to deal with. 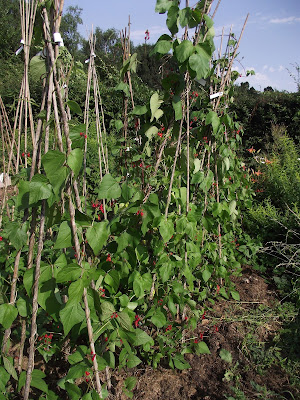 The runner beans are now in full flower; the French beans are well behind despite being planted at the same time. There are three varieties here; Black Magic, Mrs Cannell's Black and Black Pod. I'm going to let them cross and see what I end up with.

Meanwhile the broad beans are well developed, and I need to harvest what I want ASAP, if I can just bend down to get at them! A few weeks more and I'll be harvesting for seed. Then I can build some more raised beds in that space. I've already treated the planks.

The day length neutral broad beans are up, and looking a bit wilted in the heat. I'm waiting to see how they get on; if they don't do well, no matter. They'll just go into the mix next year.

I'm harvesting peas for seed, and I've lifted onions and garlic. They're no good, but the shallotts are by far the best I've ever had. I've never been able to grow them at ground level, but they thrived in a raised bed. If my back would just recover from whatever I did to it, there's loads to get on with.
Posted by Robert Brenchley at 12:16