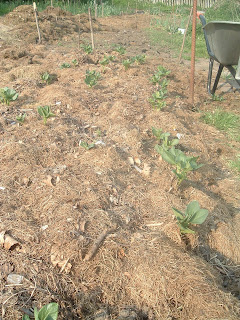 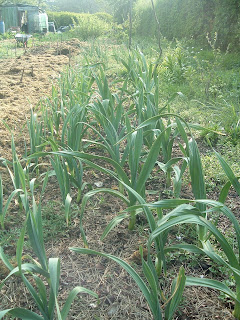 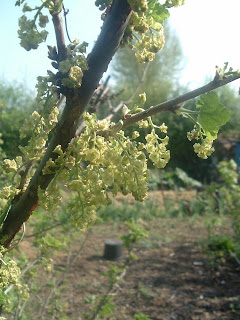 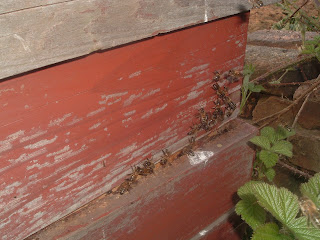 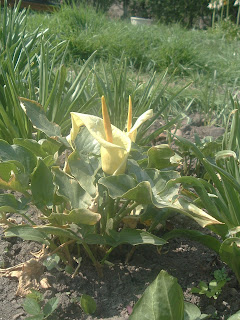 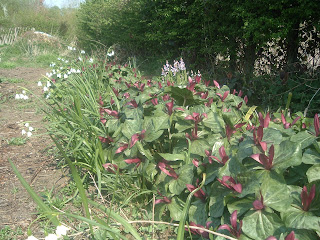 I took these over the weekend; 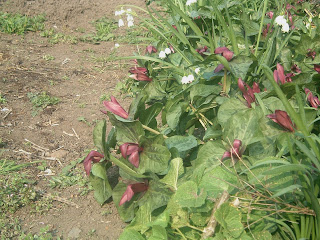 I was so tired after 35 teaching hours during the week, doing extra revision classes, that a long session I planned on the allotment turned into a couple of hours' aimless pottering. I even got there and realised that I'd completely forgotten to change into old clothes!

The Arum creticum is a mingy little thing, but it's the first time it's flowered in several years. As you can see, the Trilliums have been drooping in the heat; this is a habit of theirs as they really want all-day shade which I can't give them. They perk up overninght, and hopefully with the forecast cooler temperatures on the way, they should be better shortly. The garlic pic shows an early variety on the left, and elephant garlic on the right. The Broad Beans are coming up nicely, but I don't have many seeds in the ground yet; I tend to be pretty cautious about planting. I've started taking trays of seedlings down to the mini-greenhouses, much to Namissa's relief, and more's going to be planted this week.

I've got an easy week during the mocks; no normal lessons, and as I've got an odd student coming in for extra tuition, I've escaped doing any invigilation. So, at last, there's time to start catching up on myself.
The bee pic shows what happened when I knocked one of the boxes askew in one of the hives that had died out over the winter. An enthusiastic robbing seession immediately followed. It's obviously far easier for bees to steal honey than to make their own, and they do so to the point, sometimes, of wiping out weak colonies. The interesting thing is the the entrance to that hive has been left open, a couple of feet from their own, and they haven't found it. I use very small entrances, with mesh floors and false entrances to the rear, to confuse wasps, and it obviously works on bees as well. Since they're my own bees, I'm just leaving them to rob it out.
I had a look at the surviving colony over the weekend; they now have two frames of brood, and are beginning to expand nicely.
Posted by Robert Brenchley at 10:42