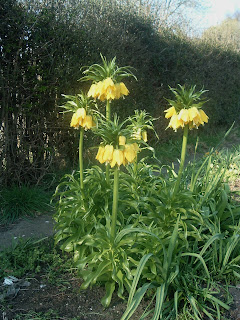 These crown imperials are looking cheerful at the moment, and I wish I could say the same for my more conventional orangey-red ones. these are sulking though, year after year. I find them pretty fussy; if planted in one spot, they do well; a few yards away, they do badly. The other clump do seem to get a little stronger from one year to the next though, so maybe time will sort it out.

I've really let myself in for it this Easter; I signed up for extra revision classes, thinking I'd just get a few, and I've been overwhelmed by the rush. i've been teaching every morning this last week, with the odd afternoon as well, but at least that gave me a little time for the allotment. This coming week, I've got seven hours' teaching a day, all the way through. It won't leave any time or energy for anything.

Meanwhile, of course, I'm getting behind again. I had hoped to use the holiday to dig over some of the ground I've left for the last couple of years, but there's been no chance for that. I won't need the ground for a couple of months though, so there's time yet. All the onions are in, and I'll be planting early potatoes (Rocket) later today, a bit tardily. I've bought a second mini greenhouse, which is going to be needed badly, and I've been planting seeds in pots; there are trays of sweet peas, and a couple of heritage pea varieties; Ne Plus Ultra and Purple-Podded. I haven't planted anything outside yet though apart from broad beans, which are just coming through.

I had a little old bean seed, which had shrivelled, turned blackish, and looked mouldy. I didn't extect it to do anything, but out of curiosity, I planted it alongside the new. To my surprise, it's coming up strongly.

Posted by Robert Brenchley at 09:15