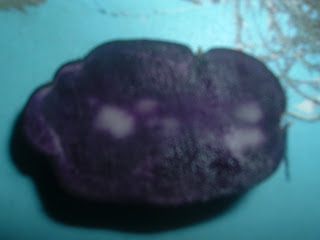 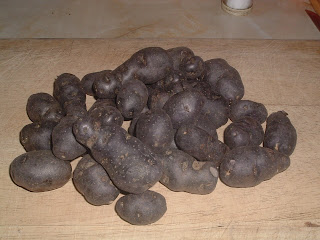 I found these in the market the other week, and got some small ones to grow on. The stallholder had no idea what the variety is. The tubers are deep purple-black, with violet flesh. From what I can make out, the two most likely varieties are Vitelotte, 19th-Century French, supposedly imported originally from Peru, and Congo, 19th-Century British. Both are late maincrops from what I've been able to discover, though someone suggested that Vitelotte may be a bit earlier than that. Congo seems to be very late indeed. I don't know what the chance of it surviving trhe blight is, but I'l try.

Anyone got any ideas?

PS. I've added a pic of the inside. It's not much good but I couldn't see what I was doing. Namissa just said it looks just like black pudding.
Posted by Robert Brenchley at 18:39