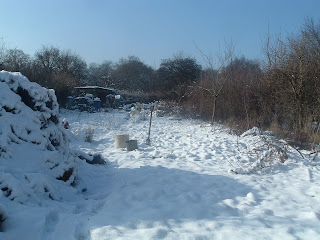 As you can see, it snowed all night. It's been mild and sunny today, and it's been melting fast. It's now clouded over, so hopefully it won't freeze tonight. Namissa insisted on driving to the mosque for prayers. She injured her shoulder in a fall over a month ago, and I was quite worried as it's been giving her hell. She says it hurts, but it's not as bad as when she did the same thing last week.

I'm going totally mad this year; nineteen varieties already, and another on the way. I've got enough seed of half to expect crops off them. I only have a few seeds of the others, many of them from the HSL, and I'll be growing them to bulk up. Then there are the climbing beans on top, but I'm not going quite so crazy there, and I won't be trying to grow all the dozen or so I have this year. I'm going to have wigwams all over the plot, but it should be interesting!

The varieties are:
Purple-Podded varities:
Robinson's Purple Podded
(From Robinson's Seeds, hence the name)
Lancashire Lad
Victorian Purple Podded
Clarke's Beltony Blue
Ezethas Krombek Blauwschok
(Old Dutch variety)
Commander
Green Podded Marrowfat Types:
Champion of England
Alderman
Early Onward
Hugh's Huge
McPartlin
Robinson
Magnum Bonum
(My favourite so far)
Hatif d'Annonay
Mangetout Varieties:
Golden Sweet
(Yellow pods, purple flowers)
Carouby de Mausanne
(Large pods)
Bijou
(Very rare, described by Real Seeds as a 'Giant sugar pea'. Very large flat pods)
Others:
Irish Preans
(Large seeds which look a bit like small broad beans. Allegedly a cross, but I don't believe it! Purple flowers)
Serpette Guilotteau
(From Real Seeds. Small peas, curved pods. The latter is a primitive characteristic, so it may be interesting)
Salmon Flowered
(Pink flowers in a mass at the top of the flattened stems. It seems to be a survival of the umbellate type which was popular in the 17th Century)
Purple Flowered Russian
(According to the HSL, this has purple flowers, and small round peas in thin pods. It sounds interesting)
Some I've grown before, some I haven't. I'll post reports on the ones I get a crop from later. The marrowfat types are often well recorded, with dates and breeders available. These were in the old seed catalogues, for sale to those who could afford to keep buying pea seeds. The purple podded types seem to have been grown by farmers, who habitually saved their own. As a result, there's no history attached to them. They're not so sweet, and were dried for pease pudding, mushy peas, soup, and similar dishes. Most of the varieties I've come across have peas the size of marrowfats, so I suspect they're 19th Century 'improved' varieties, rather than anything older.

Posted by Robert Brenchley at 16:00