Potatoes, and a Break-In 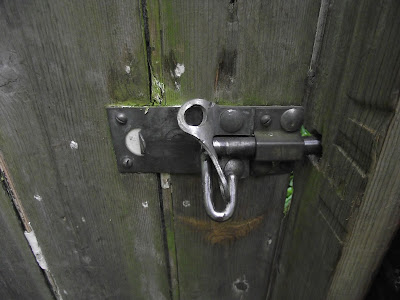 This is the state I found the lock on my allotment gate in on Sunday. Someone - no doubt kids with tools - had been along ten or a dozen plots, breaking into all of them. They eventually managed to wriggle through a gap in the hedge, but not before they'd bent up my bolt to the point where it couldn't be opened. I broke in, got a crowbar and a big hammer, and manged to get it reasonably well straightened out, so it opens again. Nothing inside had been touched, and they hadn't even got into the polytunnel. Or if they did, they shut the door properly behind them! 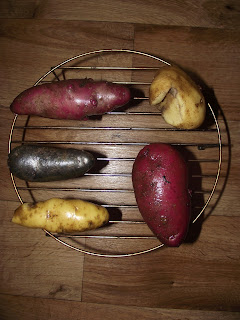 These are some of my experimental potatoes, which made a good meal yesterday. They're all grown from true seed from various varieties. I'm obviously very late lifting them, but they're in good condition, and I'm getting enough decent-looking spuds to full a couple of beds. They should give me a good crop this year. I'm particularly pleased with the black one, at least at first glance. It was solid black inside,and kept its colour well as a baked potato. It's 'son of' Violetta. The very red one was ex-Blue Belle, and again, a good solid colour inside.
Posted by Robert Brenchley at 22:34