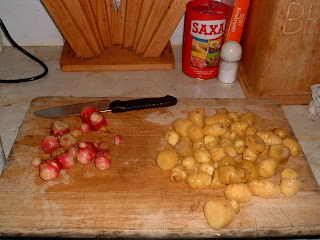 I lifted these yesterday, from two plants. As you can see, the red
oca didn't produce much. I don't know whether it's typical, though; I couldn't see any more of the same variety with tubers on the surface, which would give me a comparison. Some of the tubers I put in were very small, and I'm planning to plant the biggest next time. I don't know whether that makes a difference. It showed no frost damage at all, having come sailing through with nothing but fleece and snow above some of the tubers. The white variety had a more satisfactory yield, but all the tubers on the surface had gone soft from being frosted. There was next to no slug damage, and what there was, was all on the surface. 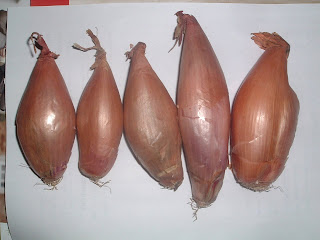 The second pic shows some alliums like long shallotts whic I found on a Chinese stall at the Bull Ring market in town. Many of them are shallott size, and at first I assumed that was whaqt they were. Some were much bigger though; for comparison, they're sitting on an A4 sheet. When I got them, there were very few of that size, and I picked them out for growing on. Today, though, I saw they had more in, and a lot were this size. Obviously the customers prefer the big ones! I'll try them and see what they turn into.
Posted by Robert Brenchley at 22:43